We win! The Chancellor withdraws the proposal to close PS 25; let's hope as its enrollment grows, he keeps its class sizes small 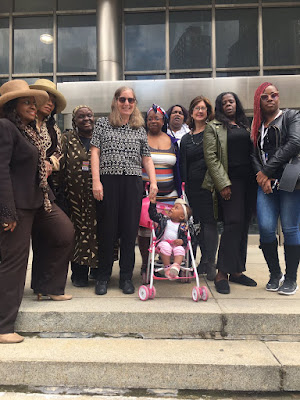 Update: Articles in Bklyner and Chalkbeat about our victory in court, though Chalkbeat has the wrong figures for the per student spending and has so far refused to correct them.  The $50,000 per student cost at PS 25 depends upon assuming an an enrollment of 60 students; as PS 25 enrolls 82 students so the real figure is much lower -probably about $36,000.

Today we won our fight to keep PS 25 open!  DOE had tried to close the school last year, despite the fact that it is an excellent zoned neighborhood school in Bed Stuy that gets stellar results despite a highly disadvantaged student body: 27% kids with special needs, 18 % English language learners, 92% Black and Hispanic, and a 96% economic need index- which combines measures of poverty, public assistance and homelessness. And yet the school performs as well as the citywide average in ELA (46% proficient vs. 46% citywide) and far above the city average in math (71% proficient compared to 47% citywide), according to the DOE's performance dashboard.

Last year, as I pointed out in my open letter to Chancellor Carranza, published in the Washington Post, the school had the fourth highest rating of any elementary school in the city according to it's "impact score", which measures achievement and attendance compared to schools with students of a similar demographic background.  And yet under Carmen Farina, the DOE tried to close the school anyway because of its low enrollment.

At the same time, it was as a result of its low enrollment that PS 25 students had the benefit of very small classes, ranging from 10 to 18 per class - which was one of the main reasons for its success, along with excellent, experienced teachers and a collaborative principal. This year, class sizes at PS 25 are even smaller: 8 to 16 students per class. In essence, the school has served as a natural experiment in class size, showing the heights at which disadvantaged students can achieve if given the right conditions and a real opportunity to learn.

Yet despite the great track record of the school, in February 2018, at the recommendation of then-Chancellor Farina, the Panel for Educational Policy voted 8-5 to close it, with the eight mayoral appointees all rubber-stamping the proposal.  The following month, I helped PS 25 parents file a lawsuit to prevent its closing, with the assistance of Laura Barbieri, our pro bono attorney from Advocates for Justice.

Our primary legal hook was that the Community Education Council in District 16 had never voted to approve closing the school,  which would be required according to NY Ed Law section 2590-E and Chancellor’s regulations A-185, since PS 25 is a zoned school and the district CEC has to pre-approve any changes in zoning.  On May 24, Judge Katherine Levine of the Kings County Supreme Court granted the parents a temporary restraining order, and said the school should stay open for at least year, while she examined the legal issues more closely.

The Judge scheduled another court hearing today, May 16 at 11 AM, nearly a year later.  Right before hand, yesterday afternoon, the city's attorney called our attorney Laura Barbieri.  She asked Laura to agree to a postponement of the hearing.

Laura said absolutely not, unless the DOE promised that they would withdraw their proposal, as it would be unfair to the current students in the school and the ones that had pre-registered for next year to suffer any more uncertainty about the school's fate.  It was also unclear to us if the DOE could close the school so late in the year, considering the law that says that any change in school utilization has to be announced at least six months before the start of the next school year, according to NY Education law 2590-H and Chancellors regulations A-190.

This morning at 10 AM,  the city's attorney Caroline Kruk called Laura back and said the DOE was  withdrawing its proposal to close the school and had agreed that it would stay open at least another year.

Judge Levine insisted on holding a hearing this morning anyway, to discuss the case and the terms of the settlement with both sides.  Gathered in the courtroom's audience were several parents from the PS 25 PTA, along with a former parent at the school, community activist Betty Davis, and Audrey and Gerry Baker, two alumnae from the school who are also former NYC teachers and administrators.

Judge Levine said she had been prepared to issue a ruling from the bench, but that she was happy that we had settled and the DOE had withdrawn its proposal to close the school.  It was pretty clear from her remarks that if they had not, she would have ruled in our favor.

She asked if the attorneys if they had anything to say.  Our attorney, Laura Barbieri, pointed out the new data showing that the school had achieved even higher test scores in math this year and that already, 16 students had pre-registered for preK, and 25 for Kindergarten next year, revealing evidence of a growing demand for the school.

Judge Levine asked the city's attorney if the DOE would support the school and help it to continue to grow.  Caroline Kruk responded that the DOE intends to work with the principal and the community to encourage this to happen.

The Judge then said, "You don't have to be a rocket scientist to see one of the reasons the school has made so much progress is because of its small class sizes."   She told Caroline Kruk and the DOE attorney who was present that even if the enrollment does increase, the DOE should do everything they can to ensure that the class sizes remain small.  If ten more students are added to the 25 Kindergarten students already enrolled, she hoped that the DOE would provide the school with enough funding to "open up another classroom."  The city's attorney responded that "this was certainly a possibility."

Finally, the Judge said that given the controversy over the SHSAT, it was counterproductive for the DOE to close the school, given how it is a "great incubator" for kids who might not otherwise score high enough to be admitted to the specialized high schools.  She ended her remarks by saying:  "I would hope that I don't have to see you back next year."

We all clapped, and Dascy Griffin, the head of the PS 25 PTA stood up, and thanked the Judge on behalf of PS 25 students, who just want their chance to learn.


So that's the story.  Our attorney, Laura Barbieri, plans to demand as part of the settlement, the DOE must promise to alert her at least six months in advance if they decide to close the school again, so we can spring into action and refile the lawsuit.

We also plan to contact all the Community Education Councils to let them know they should watch out for any DOE proposal to close or merge a zoned school - because according to law, this can happen only if they approve this through a formal vote.  If the DOE does make such a proposal without their consent, they should let us know; as we have a lawsuit just ready to be filed on their behalf.

Let's hope the DOE takes this experience to heart, and learns from the example of PS 25: that small classes make a huge difference, especially for poor kids and students of color, and they should take this into account if they want our students to succeed, whatever their economic and racial background.

Below is the letter from NeQuan McLean, President of CEC 16, thanking the DOE for withdrawing the proposal to close PS 25 and that "We look forward to partnering with the P.S. 25 community and with the DOE to support the school in increasing enrollment."

This is great news. Congratulations to all who have been fighting this battle. It is sad though that test scores were the bottom line and not what students actually learned. Hopefully that kindergarten class size can be cut down to 15 and 15 as 25 is still too large especially if there are no classroom assistants. Let’s hope the DOE comes to their senses that small class size, a rich environment and great teachers is what has children learn and excel. PS 25 has been the ultimate test case for small class size in our public schools in recent years.