Update: the Research Alliance tweeted that discharge rates were decreasing over this period; though this is not what our discharge report found according to DOE data between 2000-2007, see Figure 2.  Another issue ignored by their report; the well-documented use of sub-standard credit recovery to boost graduate rates in the closing schools of over 10%.

Yesterday, another dubious report was released by the Research Alliance, claiming better outcomes for students as a result of Bloomberg's draconian school closure policy.  A major problem with the study is that it doesn't examine the well-documented destabilizing impact of closing these schools on other large high schools nearby, as discussed in this New School report.

Nor does the report mention the issue of soaring discharge rates at the closing schools.  In fact, the word "discharge" is never used in either the report or the technical appendix.

In the report Jennifer Jennings and I wrote on the DOE's rising discharge rate between 2000 and 2007, we found this problem especially evident at the closing schools, with rates as high as 50% for the last two graduating classes at closing schools.  See this graph : 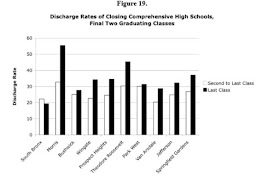 Theoretically, these students were supposed to have transferred into another high school or GED program program outside the NYC public school system, and thus were not counted as dropouts -- but probably should have been.  Indeed, a subsequent audit from the NYS Comptroller's office revealed that 15% of general ed students reported by the DOE as discharges should have been categorized as dropouts, and 20% of special ed students.  Probably an even larger percentage from the closing schools were really dropouts.

The Research Alliance was founded with $3 million in Gates Foundation funds and is maintained with Carnegie Corporation funding, which help pay for this report.  These two foundations promoted and helped subsidize the closing of large schools and their replacement with small schools; although the Gates Foundation has now renounced the efficacy of this policy.  Michele Cahill, for many years the Vice President of the Carnegie Corporation, led this effort when she worked at DOE.

The Research Alliance has also been staffed with an abundance of former DOE employees from the Bloomberg era.  In the acknowledgements, the author of this new study, Jim Kemple, effusively thanks one such individual,  Saskia Levy Thompson:

The author is especially grateful for the innumerable discussions with Saskia Levy Thompson about the broader context of high school reform in New York City over the past decade.  Saskia's extraordinary insights were drawn from her more than 15 years of work with the City's schools as a practitioner at the Urban Assembly, a Research Fellow at MDRC, a Deputy Chancellor at the Department of Education and Deputy Director for the Research Alliance.

Levy Thompson was Executive Director of the Urban Assembly, which supplied many of the small schools that replaced the large schools, leading to better outcomes according to this report -- though one of these schools, the Urban Assembly for Civic Engagement, is now on the Renewal list.

After she left Urban Assembly, Levy Thompson  joined MDRC as a "Research Fellow," despite the fact that her LinkedIn profile indicates no relevant academic background or research skills.  At MRDC, she "helped lead a study on the effectiveness of NYC’s small high schools," confirming  the efficacy of some of the very schools that she helped start.  Here is the first of the controversial MRDC studies she co-authored in 2010, funded by the Gates Foundation, that unsurprisingly found improved outcomes at the small schools.  Here is my critique of the follow-up MRDC report.

In 2010, Levy Thompson left MRDC to head the DOE Portfolio Planning office, tasked with creating more small schools and finding space for them within existing buildings, which required that the large schools contract or better yet, close.

And where is she now?  Starting Oct. 5, Saskia Levy Thompson now runs the Carnegie Corporation's Program for "New Designs for Schools and Systems," under LaVerne Evans Srinivasan, another former DOE Deputy Chancellor from the Bloomberg era  Here is the press release from Carnegie's President, Vartan Gregorian:

We are delighted that Saskia, who has played an important role in reforming America’s largest school system, is now joining the outstanding leader of Carnegie Corporation’s Education Program, LaVerne Evans Srinivasan, in overseeing our many investments in U.S. urban education.

How cozy! In this way, a revolving door ensures that the very same DOE officials who helped close these schools continue to control the narrative, enabling them to fund -- and even staff -- the organizations that produce the reports that retroactively justify and help them perpetuate their policies.
Leonie Haimson at 11/19/2015 03:14:00 PM
Share