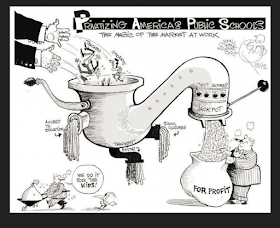 Here are three simple steps you can take to stop the privatization and destruction of our public schools:

1. Call your Senators now to oppose the nomination of Betsy DeVos. Tell them that Ms. DeVos is least qualified and most dangerous individual ever to be appointed US Secretary of Education.

Ms. DeVos never attended a public school, never sent her children to one, and never has served in any educational or governmental capacity.  Her only qualification seems to be her wealth, which she has used to promote a radical agenda of privatization -- and to oppose any government oversight to guard against corruption, self-dealing and poor quality schools.

Network for Public Education has a toolkit with these and other suggestions.

3. Give to Class Size Matters.   We will continue our fight for the right of all students, but particularly those here in New York, to receive their right to an equitable, well-funded public education – and the smaller classes they need and deserve.  You can make a tax-deductible donation online here by credit card, or if you prefer by sending a check to the address below.

Thanks as ever for your support,

I strongly urge you to vote against the nomination of Betsy DeVos to be Secretary of Education.  Never has someone so uniquely unqualified been selected to this post.  Ms. DeVos never attended a public school, never sent her children to one, and never has served in any educational or governmental capacity.  Her only qualification seems to be her wealth, which she has used to promote a radical agenda of school privatization and vouchers.

More than 90% of all American children attend public schools; public schools are the bedrock of our democracy and one of the few unifying forces in our nation.  Diverting taxpayer funds to private and religious schools will not only severely weaken our public schools, but will sow more discord, division, and degrade the quality of education that children receive.

Moreover, in 2008, Ms. DeVos’ PAC violated Ohio’s campaign finance laws, and was fined $5.3 million, which remains unpaid.  Her PAC ignored an advisory ruling that this would be illegal and yet went ahead anyway.  Such disregard for ethics and the law should not be rewarded with a cabinet position.

Because of Ms. DeVos efforts, nearly $1 billion of public education dollars have been drained each year from Michigan public schools into mostly for-profit charter schools of poor quality.  According to the New York Times, “divisive politics and educational ideology … have combined to produce a public education fiasco that is perhaps unparalleled in the United States.” The attempt of Michigan’s Republican Governor Rick Snyder to insert some accountability, quality control, and oversight to prevent corruption and wasted taxpayer dollars was defeated because of her advocacy.

The Phi Delta Kappa/Gallup poll reveals that only 31% of Americans favor allowing students to attend private schools at public expense. Since 1972, all attempts to create state voucher programs through referendum have failed, generally by two-to-one margins. Recent research has concluded that public school students who receive vouchers to attend private schools score much lower on both reading and math tests than those who remain in the public schools.

Contrary to Ms. DeVos rhetoric, my first choice and the first choice of the most American parents is a good neighborhood public school, and we want our nation’s public schools to be supported and strengthened rather than dismantled.  As Mark Twain said, “We believe that out of the public school grows the greatness of a nation.”

The appointment of Ms. DeVos could set back the progress of our nation’s public schools so severely that they might never recover.   I would appreciate if you would let me know how you intend to vote on her nomination.