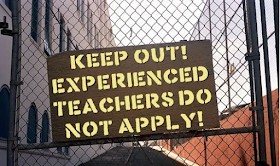 Today Chalkbeat covers the budgetary ramifactions of the new agreement between the UFT and the NYC Department of Education in which the DOE will place ATR teachers (on Absent Teacher Reserve) in schools with vacancies, whether the principal chooses these particular teachers or not.  In addition, unlike earlier years, the principal will have to pay the full amount of their salaries – which are often much higher than the average teacher salary, even though the school only receives funding for the average salary under the Fair Student Funding system, implemented by Joel Klein in 2007, after much controversy and protest.

As an earlier Chalkbeat article explained, the cost of the ATR pool has risen to more than $150 million per year, according to an IBO estimate, and included 822 teachers at the end of the last school year -- teachers who had no permanent assignments but had been “excessed” because of school closings, enrollment decline, disciplinary offenses or low ratings from their principals.  The existence of a  wasteful system like this is the confluence of large number of factors and policies adopted by the DOE during the Bloomberg administration: mass school closings and their replacement with charter schools, NYC’s  version of a student-weighted funding system called Fair Student Funding, and the agreement made in 2005 not to place tenured teachers who had lost their positions into schools with openings, but leave the choice of who would fill these positions completely up to the principal’s discretion.

Earlier this summer, the DOE announced plans to place hundreds of these teachers into school vacancies by Oct. 15, even if principals objected. And yet one of the reasons that the ATR pool has grown so large and principals remain reluctant to hire them, no matter  their qualifications, is that one of the peculiarities of the Fair student funding system, at least in NYC, is that it requires principals to cover the whole cost of their staff, by allocating per student funding to a school based on the average teacher salary -- which has decreased in recent years due to teacher attrition.

According to Chalkbeat, based on IBO estimates, “on average each ATR teacher received a total of $116,258 in salary and fringe benefits for the past school year. (By comparison, the base salary for a city teacher as of May 2017 was $54,000). “ Thus for every average teacher hired from the Absent Teacher Reserve, a principal could hire more than two new teachers for his or her school.

At the time, Robert Gordon who devised the Fair Student Funding system for Joel Klein in 2007 was quoted in the NY Times as saying that the system would allow principals “to retain their most experienced teachers if that is what they want to do.''   This shows that the idea was devised to provide an incentive to schools to get rid of their experienced teachers, through the ATR, the rubber room or otherwise. At the time Randi Weingarten, then head of the UFT warned in the above article that “it will destabilize good schools and give principals a disincentive to hire experienced teachers simply because they cost more.''

Advocates like Noreen Connell of the Educational Priorities Panel was quoted in the same NY Times article that “the funding proposals have the potential to do lasting damage for decades to come.'' More specifically, she warned that by not covering the costs of a particular staffing ratio, the system would lead to sharp class sizes when budgets were cut—and principals would have no choice but to increase class size, get rid of their experienced teachers, or both.

Class sizes have indeed risen sharply since 2007, and nearly ten years after the recession many schools still only receive 87% of the funds that they are owed via the FSF formula. I would argue that the system is inherently misconceived and undermines the quality of schools, since there are only two observable, quantifiable school-based factors that have been shown to lead to more learning – small class size and experienced teachers.

I don't know any other school district in the country that has adopted this version of Fair Student Funding and that demands principals cover the full cost of their staff no matter what their salaries. If you do know of another district that does this, please let me know below.

Bill de Blasio promised when he was running for office he would re-evaluate the FSF system, but has not done so.  Certainly, no NYC Mayor would impose this sort of rigid funding system on local police precincts or firehouses, and demand that NYPD or fire company captains cover the cost of their staff -- – even if could mean shortages if they had particularly experienced officers.  If any Mayor did try to impose such a system, no doubt he would face mighty resistance from his own Commissioners as well as the police/fire fighter unions.

Just as I am not aware of any other district that has adopted NYC’s version of the FSF system, I don’t know of any district that has given principals the right to hire outside the reserve of teachers already on staff.   When Cami Anderson ran the Newark school system from NYC she adopted the system, but it was later deep-sixed by Chris Cerf when he was appointed as Newark Superintendent – because it was recognized as too expensive and too wasteful.

If teachers are incompetent or have engaged in misconduct, they should be dismissed in the usual way, via a 3020-a disciplinary hearing, rather than put into the Absent Teacher Reserve. I know of several former principals and administrators who say this is time-consuming but eminently doable.  If teachers have not been found to exhibit any of these deficiencies, they should be offered to principals to reduce class size or provide other services at no expense to the school. If there are any teachers left over in the reserve, their contracts should be bought out.   The current system is an absurd waste of money. And NYC’s Fair Student Funding system needs to be re-evaluated in light of its detrimental impact on teacher experience and class size.
Leonie Haimson at 8/03/2017 07:44:00 PM
Share