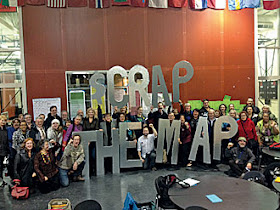 The NYC Department of Education is mandating that all schools administer standardized interim tests three times a year, also called benchmark or formative assessments.  Here is the excerpt from the DOE handbook, “Instructional Principles”, describing these assessments, which are euphemistically call “screeners”.

Alternative standardized assessments can be selected by schools but must be approved by DOE central.

According to the UFT, the first round of testing for grades K-10 will occur starting Sept. 27 and will continue through Oct. 22.  Students in grades 3-10 will be administered computer-based tests during this period, and K-2 kids will be assessed via “individual 15-minute question-and-answer sessions.” Given that many kids in grades 1 and 2 are in classes of 28 or more, these sessions could take a teacher seven to eight hours of class size over this three -week period.

This new regimen of commercially-prepared tests according to the DOE will cost $36 million – more than twice the amount they are spending for their “class size pilot”.

Some of us remember how in the first phase of Children's First under Chancellor Joel Klein, similar interim assessments were required at every school, along with literacy and math coaches and a unified curriculum, similar to the regime of reforms that DOE is now attempting once again.  Here is an excerpt from a DOE 2005 press release, heralding these measures as leading to gains in state test scores:

Our new Citywide core curriculum, coaches, professional development, interim assessments, and aggressive intervention programs for struggling students, coupled with the enormously hard work of our teachers and other school staff, all contributed to these tremendous gains.

These same test score gains, however, were not seen on  the NAEPs,  the more accurate and reliable national assessments, and when the state exams were re-calibrated in 2010 to eliminate the rampant test score inflation that had occurred over this period, the gains disappeared.

This is not surprising.  As I wrote recently  in the Gotham Gazette, there is little or no research showing standardized interim assessments help students learn, or reliably diagnose their learning problems.

Few if any independent peer-reviewed evaluations have offered evidence for their validity or demonstrated that they have any positive impact on learning. One of the few randomized studies showed that administering the MAP exams had “no significant effect” on achievement. Many teachers have critiqued iReady exams, and many students despise them.

As the late Robert Slavin wrote, director of the Center for Research and Reform in Education at Johns Hopkins University:

Research finds that benchmark assessments do not make any difference in achievement. …In a rational world, these findings would put an end to benchmark assessments, at least as they are used now. The average outcomes are not just small, they are zero. They use up a lot of student time and district money… Interim assessments fall into the enormous category of educational interventions that are simple, compelling and wrong. Yes, teachers need to know what students are learning and what is needed to improve it, but they have available many more tools that are far more sensitive, useful, timely, and tied to actions teachers can take.

Why are these assessments so relatively useless?  Because by and large, they are disconnected from the actual curriculum and work being done in classrooms. UFT President Michael Mulgrew pointed out  in 2019,when then-Chancellor Carranza first proposed imposing these tests, “How do you use a standardized formative assessment when you don’t have any sort of standardized curriculum….You don’t even know what you’ll be measuring.”

Indeed, after the first round of Children’s First in NYC, interim assessments were quietly eliminated after a few years, along with all those literacy and math coaches.

Scott Marion, the Executive Director of the Center for Assessment  explains,

In Seattle, the MAP tests were dropped in 2013 in all high schools after a successful boycott of teachers and students, and made optional in other grades.  Teachers pointed out how they didn’t test students on the material they were learning in the classroom.

And last spring, after many Chicago students were found to be taking  hours and even days  to complete the open-ended MAP exams, the Chicago Board of Education dropped its contract with North West Evaluation Association, the company that produces them.

There are also serious privacy concerns with these exams.  The MAP exam attempts to measures student engagement and self-regulation by a student’s pattern of clicks and responses.   NWEA claims that “Teachers can use this information to identify students who may benefit from SEL (social and emotional learning) interventions.”  Parents have expressed concerns about the company’s use of this data, and the fact that NWEA hasn’t signed the Student Privacy pledge.

Recently, a Brooklyn parent wrote me: “One of my sons already took a round of MAP when his middle school began administering them ….  The data still follows him, the test was so "ridiculous and meaningless, unrelated to what he was learning" (his words) and the predictive analysis so deeply flawed (forecasting that this honor roll student would not graduate HS or go to college on time).

She added: “I will be opting both of my HS students out of MAP and will continue to advocate for what our schools and all students really need to flourish and be safe, especially this year.”

Other NYC parents, students and teachers should seriously consider doing the same.

Watch Democracy Now's coverage of the successful Seattle boycott of these exams nearly a decade ago.