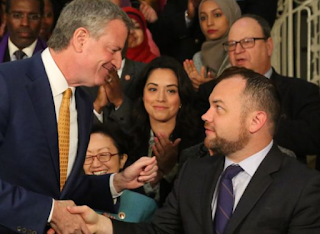 The new NYC budget deal was announced between the Mayor and the City Council on Friday.

In terms of our public schools, it included $41M more to hire about 200 new social workers for schools, especially those with lots of homeless kids and $857,000 for seven additional Title IX Coordinators to handle complaints of gender discrimination and sexual harassment.  The budget will also put $250M into an overall city budget reserve to be used during economic downturns that now totals $6 billion.

The education budget will  include  another $25 million  for the Mayor’s top education priority: 3K expansion into 14 new districts, bringing the cost to around $100M.  If the pattern of previous years holds, the DOE will continue to draw kids out of existing preK centers run by Community Based Organizations  and pushing them into already overcrowded public schools, which in turn will contribute to higher class sizes for kids in grades K-5.
What the education budget doesn't include: any increase in Fair student funding (with many schools are currently at only 90%), no dedicated funding for class size reduction, and no amount to achieve CBO pay parity for preK teachers -- though the Council says they got a commitment from the Mayor to address this disparity though negotiations by the end of the summer.

The only elementary school initiative that I know of is the 2nd grade literacy coach program in high needs schools, which is  now in its third year, funding 242 coaches in 305 elementary schools, according to the DOE website.  The program is supposed to produce two-thirds of students reading on grade level by the end of second grade by 2022, and 100 percent of all second graders reading at grade level by 2026 (long after de Blasio has left office.)

Yet the first year of the program showed no positive impact and the administration has not yet released data from either its second or third year - which suggests it may have had disappointing results as I predicted. Though the news of the budget deal didn't mention this, it is likely that the initiative will continue to be funded next year at the level in the Mayor's executive budget of about $90 million per year.  (There are job listings for this position here.)

In any case we aren't giving up on our campaign to reduce class sizes.  More counselors are great but there this will do little to improve achievement in grades K-5 where class sizes in many schools are still sky high.
Posted by Leonie Haimson at 6/16/2019 06:32:00 PM