Time is running out on the class size bill -- & how you can help!

1. Only about two weeks remain before the Council adjourns and a new City Council  takes office.  Please send a letter TODAY to Council Speaker Corey Johnson by clicking here-- demanding that he schedule a vote for the class size reduction bill, Int 2347.   When Johnson was running for Speaker, he promised that if 34 Council Members signed onto a bill, he would bring that bill to a vote. Int 2347 now has 40 Council Members as co-sponsors, including the Speaker himself. NYC kids need smaller classes for a safer environment and a better chance to learn! Write him today!

2. This Thursday, Dec. 2 at 6 PM EST, Class Size Matters  and NYC Kids PAC will host an emergency briefing and strategy session on class size -- what the research shows, how NYC class sizes compare to those elsewhere in the state, and what we should do to help get this bill passed. Sign up here and we'll send you a link to the event.   Join us!

3.Tomorrow is Giving Tuesday. Because of the pandemic, we haven't been able to hold our Class Size Matters fundraiser for the last two years. No matter what happens to this particular bill, we'll continue to provide the oversight, outreach, advocacy and analysis necessary to ensure that someday soon, our students receive the smaller class sizes they deserve.  Please give as generously as you can, to help ensure that our work continues even stronger than before.

P.S. If you buy gifts through Amazon, by ordering through Amazon Smile, Class Size Matters will receive a small percentage of the amount.
Posted by Leonie Haimson at 11/29/2021 02:25:00 PM No comments:

Check out our latest  #TalkOutofSchool podcast with UFT President Michael Mulgrew and teachers Emily James & Tricia Arnold, who explained why they are fighting for smaller classes for NYC schools and what you can do to help.

Get vaccinated and get your booster - School vaccination sites and schedules and city-run sites.

Urgent! Call Speaker Johnson to ask him to schedule a vote on the class size bill! 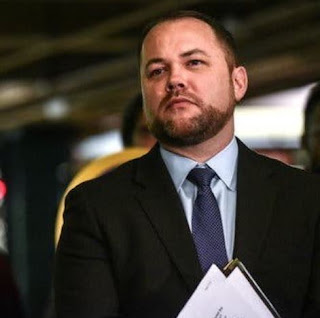 The good news is that with your help, 39 Council Members out of 49 have now signed onto Int. 2374, the bill that would require class sizes be reduced in NYC schools. This is a veto-proof majority, so that if passed, the Mayor could not block it.

The bad news is that the Mayor is trying to stop the bill from ever coming to a vote. This vote was supposed to happen Nov. 23, but has now been delayed.

So I need your help -- please call Speaker Corey Johnson's office TODAY to urge him to schedule the class size bill for a vote. We only have a month until nearly the entire City Council turns over and we have to start from scratch.

Here is his phone number and a suggested message, but feel free to alter it in any way you like:

I am a parent and I'm calling to urge the Speaker to schedule a vote on Intro. 2374 as soon as possible. It just isn't fair that NYC class sizes are 10-30% larger than those in the rest of the state. NYC children have waited long enough for a better chance to learn. Passing this legislation would be one of the greatest accomplishments of his time in office. My name is x, my phone no. is y., and I would appreciate a call back to find out when this vote will happen.

Then, once you've called, please fill out this form if you have time, letting us know what happened.

And please forward this message to other parents, teachers and New Yorkers who care.

When will DOE post this year's class size data that was legally due Nov. 15?

UPDATE: the class size data was finally posted late in the afternoon on Friday Dec. 3, 18 days after the legal deadline; see the article in Gothamist.  Accurate data for last year still hasn't been provided and probably never will. Our analysis of this year's data will follow soon. .

According to a Local Law 125 passed in 2005,  the DOE is required to report on class size data by school, district, borough and citywide each year by Nov. 15, and then again on Feb. 15.

Nov. 15 was two days ago, and yet class size data for this year has not yet been posted.  We have a clock below that started at midnight Nov. 15, to track how late the data is posted -- if it ever will.

The DOE still hasn't posted accurate data for last year's class sizes, despite a  promise in writing by Deputy Chancellor Karin Goldmark to CM Mark Treyger that they would do so last year, and sworn testimony before the City Council by Chancellor Meisha Porter to CM Dromm about this as well.

Instead, last February, three months late, they posted the data for (very small) in-person classes only, rather than providing any data on the remote or blended learning class sizes.  This is despite the fact that they were collecting data on the size of these classes separately since the beginning of the school year.

I will be checking regularly, but you can as well on the DOE website here; and if you see any class size data for the 2021- 2022 school year, please email us at info@classsizematters.org.

Updated! Growing support for the class size bill and how you can help!

Intro 2367, the bill that would require smaller classes be phased in over three years, now has 38 out of 49  Council Members as co-sponsors. (Two Council seats are empty.) We hope this bill will come to a vote in the next ten days or so.

As of this morning, 11 Council Members have not signed on. Their names and phone numbers are below, along with the school districts they represent and their twitter handles.

This list is updated and corrected.  CM Selvena Brooks-Powers had earlier signed on; and Brad Lander and Paul Vallone have since yesterday.  Keep those calls coming!  They make a difference.

If they are your representative, or you work or your child attends school in their district, please give them a call, and follow up with a tweet if you can. If you don’t know who your Council Member is, you can find out by filling out the form here.

Here is a sample message:

I urge you to support and co-sponsor Intro 2367, so that my child and all NYC children can have a truly equitable chance to learn. It is simply unfair that NYC children continue to be subjected to the largest class sizes in the state.

The updated list of Members who have NOT signed on is below. thanks Leonie

Why the Fair Student Funding Task Force report was never released, and recommendations from eight of its members

The Superintendent of the Boston Public Schools recently announced her intent to eliminate or radically reform their weighted student funding system, because it fails to properly provide for all the programs and services that students need and because it incentivizes principals to overcrowd their schools and classrooms. The same  flaws are inherent in the NYC Fair Student Funding system.

Following widespread protests, the  formula was first adopted by then-Chancellor Joel Klein in 2007, despite serious concerns as to whether it made sense and might lead to increases in class size over time (as it actually did). In January 2019, the City Council passed a law , Local Law 1174, to create a Task Force to analyze the  formula and come up with a report by Sept. 2019 with recommendations on how to improve it.  The below account was written by one of the Task Force members, Shino Tanikawa, to explain why the report was never released; and below her account are the recommendations submitted by eight of the members on the Task Force that the Mayor refused to accept or release.

I was appointed to the Fair Student Funding Task force by DOE. The Task Force met regularly for 9 months, deliberated, and produced a report ready to be submitted to the Mayor and the Chancellor. Unfortunately during the final review by the City Hall, the report died a quiet death and was never released.

It became clear the City Hall’s interest was in using the Task Force recommendation to pressure the State to fully fund the Foundation Aid, not to comprehensively evaluate the formula itself. The report contains many recommendations that would require more investment from both the City and the State. For example, we recommended increasing the Base Allocation to cover a wide range of essential staff, such as social workers and school counselors.

In addition, many advocates wanted to include language around evaluating the formula for its impact on class size but we were told the Fair Student Funding has nothing to do with class size reduction (they are wrong). The Mayor has always been reluctant to acknowledge the real need of our school system for smaller classes.

As you can see, one of our major recommendations was that the DOE should develop a class size reduction plan with specific milestones and timelines, especially as "the current funding allocation from Fair Student Funding incentivizes large class sizes in our schools."  We also found that "Nearly 80% of the principals, from 12 CSDs, who responded to a survey distributed by Task Force members identified large class sizes as a consequence of the FSF formula."

The DOE agreed to develop such a plan once our schools received full funding from the Campaign for Fiscal Equity lawsuit, but has reneged on that promise, once again, as it has so often in the past.

Eight of the parent and advocate members of the Task Force, including me,  submitted our own version of the recommendations during the FSF public comment period in April 2021.

I have now shared that report with Class Size Matters. -- Shino Tanikawa