Lawsuit and rally to restore the budget cuts to schools, which the Mayor calls "a rumor" 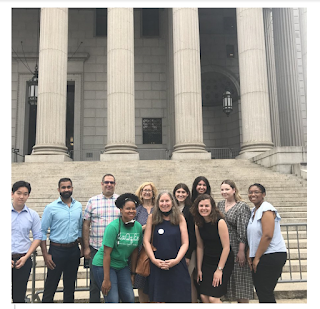 Update: the lawsuit was covered by the Daily News, AM New York, Chalkbeat, NY Post, Brooklyn Eagle, and CBS radio.

Also much thanks to Laura Barbieri and the crew at Advocates for Justice, for working so hard on this lawsuit pro bono and doing it so quickly!

This morning we filed a lawsuit on behalf of four parents and teachers to halt the Mayor's budget cuts to schools, and to require that the City Council has another opportunity to vote.

The lawsuit is based on serious procedural errors committed by the Mayor and Chancellor, by allowing the City Council to adopt the education budget before the Panel for Educational Policy had an opportunity to hold a hearing on the cuts and vote on the education budget, which state law requires must happen first.

Instead, the Chancellor declared an emergency to immediately send the diminished funds to schools,  before either of the Council or the PEP had a chance to vote on them.  In this way, he attempted to short circuit the legally mandated process.

We found that in twelve out of the last thirteen years, several Chancellors have invoked the same bogus "emergency" with the same boilerplate language -- without detailing what actual emergency existed.  Here is a press release with more detail and quotes from the plaintiffs; and here are the legal documents.

Even earlier in the day, there was a rally to protest the rally in front of Tweed, organized by the Progressive Caucus of the NYC Council, where many parents, advocates and Council Members spoke about the havoc these cuts would cause to schools and students' lives.

Among the speakers were CM Alexa Aviles, who voted against the budget, as well as five CMs who had voted to approve the budget:  CM Shahana Hanif, Lincoln Restler, Jennifer Guttierez, Shekar Krishnan and Carmen de la Rosa all apologized for their votes, and promised that going forward, they would not approve any more budget cuts to schools.  They also said they were demanding action by the Mayor by August 1 to restore the cuts. 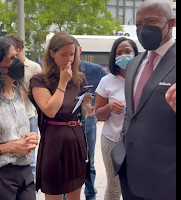 In the afternoon, a bunch of parents including Reyhan Mehran buttonholed the Mayor outside an event in Brooklyn, where the mayor called the cuts a "rumor."

They later met with the Mayor at City Hall,  where he was surrounded by a bunch of aides. After they described the awful effect these cuts would have on their schools and the system as a whole, the Mayor apparently said he couldn't say much about the issue because of the lawsuit, but that they had no idea how hard he works to benefit NYC children and how hard these choices are.

Reyhan responded with, "Just don't make these choices then.  Restore the cuts now."

A video is below of this morning's rally, with speeches from the Council Members as well as parents and advocates.