HIGH STAKES FOR MIKE AND JOEL IN “PAY FOR GRADES” POLICY 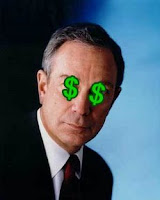 August 31, 2007 (GBN News): The plan for the NY City Department of Education to pay schoolchildren for good test scores may come at a higher price than Mayor Bloomberg and Chancellor Klein had anticipated. A spate of challenges, legal and otherwise, may soon be in the offing.

GBN News has learned that a in a number of schools, fourth and seventh graders are planning to “hold out” for higher compensation. Children are apparently organizing to refuse to take standardized tests unless the pay scale is significantly raised. One eighth grade organizer at MS 333 in Brooklyn, who wished to remain anonymous, said, “Hey, they make such a big deal over test scores, it must be pretty important to them. Let’s see what it’s really worth.”

The fact that the compensation will be limited to fourth and seventh graders has rankled many children who missed out on the incentives last year. A group of students calling themselves “Fifth and Eight Graders for Fairness” are demanding retroactive pay for last years’ tests, and they say that they may even file a class action lawsuit to force the DOE to pay damages as well. As one eight grader put it, “They say paying kids raises test scores, so I would have done much better on my tests last year if they paid me. I probably missed out on a good high school, and this could have cost me a chance at Harvard Law. That’s worth millions.”

The stakes may be even higher for Chancellor Klein. According to GBN News sources, Mayor Bloomberg will pay the Chancellor $100,000 out of his own pocket for each percentage point increase in city test scores, as an incentive to get the new policy to succeed. However, if there is no increase, the Mayor will hold the Chancellor accountable. Mr. Bloomberg was said to have told aides that, “If scores don’t go up and it costs me the Presidency, I’ll sue his ass.”

In a related story, the DOE is working on in incentive plan to insure the success of the Chancellor’s plan to institute a “rigorous, standards based” program for three and four year olds. Preschoolers, who will be tested on such subjects as toilet training, block building and nap time, will earn performance rewards ranging from Barney coloring books to stuffed animals.
Posted by Gary Babad at 8/31/2007 01:40:00 PM

I love your sense of humor. It reminds me of when I was growing up and reading Mad Magazine. Alfred E Newman, where are you when we need you?? Great stuff keep it coming..also, many a true thing is said in jest.....