Is holding back kids really the solution to our middle school problems, or is the Mayor running out of even bad ideas?

Last week, in his State of the City address, the Mayor announced that the Department of Education will now extend the policy of holding back students on the basis of their test scores to 8th graders, in addition to the third, fifth, and seventh graders who already face this prospect. This could mean the retention of an additional 18,000 students next year. Clearly, in terms of their educational policies, the administration has run out of even bad ideas.

As research and experience show, holding back kids doesn’t work. More than one hundred leading academics, researchers, and national experts on testing signed our letter opposing the administration’s proposal to retain third graders back in 2004, saying that basing promotional decisions on standardized tests is not only unfair, given the unreliability of a single exam, but also leads to lower achievement and higher drop out rates. (Check out a copy of this letter.)

Among those who signed our letter to the Mayor included Dr. T. Berry Brazelton, Dr. Ernest House, who did the independent evaluation of New York City’s failed retention program in the 1980’s, four past presidents of the American Education Research Association, the chair of the National Academy of Sciences Committee on the Appropriate Use of Educational Testing, and several members of the Board on Testing and Assessment of the National Research Council. Even the two largest testing companies are on record that the decision to hold back a child should never be based upon test scores alone. Indeed, the professional consensus is so clear about the negative effects of this policy on students’ academic and emotional health that it amounts to educational malpractice, according to Prof. Shane Jimerson of the .

Nothing has changed since then.In fact, if this policy had worked, the administration’s policy of holding back third, fifth and especially seventh graders would have caused a rise in eighth grade 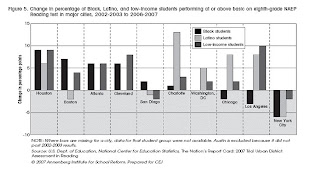 achievement. Instead, as revealed by city’s results on the national assessments called the NAEPs, test scores in these grades have been sta 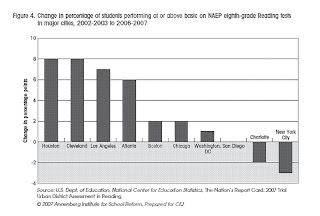 See for example, these dynamite charts, prepared by the Annenberg Institute for a new report called "Our Children Can't Wait" about the problems of our middle schools. (Click on the graphs to enlarge them). The one below shows that NYC had the largest decline in 8th grade ELA scores of any urban school district tested. The one above shows that NYC is the only city where this decline occurred among both black and Latino students over the last four years.

In reality, nearly every parent (or teacher) who's looked seriously at NYC middle schools realizes that their number one problem is huge class sizes.

In these grades, we expect a lot from our students. We expect them to learn how to read and analyze complex literature, to write essays and research papers, to master computational skills and begin algebra. All this, when their bodies, their relationships, and their sense of self are in rapid transition. Yet our schools offer none of the intellectual or emotional support that students need during this crucial time.

Instead, our middle schoolers are crammed into the largest classes in the state, and some of the largest in the entire industrialized world. Class sizes average 26-27, and one fourth of students are in classes of 31 or more – even in many failing schools. As a result, teachers are simply unable to provide these students with the support and attention they need, either in class or with their homework.

Even those who were thriving and motivated up to this point begin to become disengaged, disillusioned and fall behind. Here are the words of one parent:

“For both her elementary and middle school years, my daughter had wonderful and dedicated public school teachers. At one of the better middle schools in the city, she had 38 kids in her class. Each teacher taught four classes. With almost 150 students, how can one teacher be expected to prepare lessons, teach class, grade papers and have time left to focus on the individual child? My daughter's grades weren't the highest or the lowest. She fell into the vast middle, as do the majority of kids.”

“At her middle school, my daughter was utterly lost and very unhappy. She was forgotten. No not forgotten, never known. It is a crime that at this crucial turning point, when adolescents are searching for an identity to call their own, they are tossed into huge classes with no one who has the time to see them as individuals.”

Yet this administration refuses to take affirmative steps to make sure that our middle schoolers are better known to their teachers, even in the face of a new state mandate to reduce class size. Instead, the new policy to hold back more 8th graders will likely cause classes in this grade to grow even larger, as students are increasingly stalled at this level, prevented from moving on into high school. Frustrated by their lack of progress, and by their inability to get the help that they need, many will eventually drop out.

It’s a shame that this administration won't act to improve the opportunities for our children to succeed, but rather insists on increasing the chances that they will fail.

I was representing our school at our district's Middle School Fair and class size was the number 1 priority for parents; above even our school's test scores. One parent (jokingly) asked if there was any school that has a teacher-student ratio of 1 to 2. Now if we can only get teachers organized.