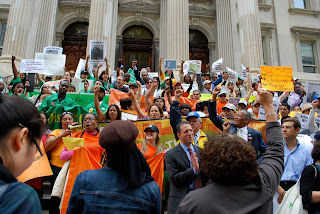 It’s been a busy week.  On Wednesday there was a spirited rally on the steps of Tweed to protest the continued cuts to school budgets, the loss of art, music & afterschool program, and the sharp increases in class sizes; a good summary of the event is on the  Ed Vox blog.  There were great speeches by parents and elected officials, and I met a large contingent from PS  217 in Roosevelt Island, protesting Kindergarten classes of 28 and 5th grade classes of 34, even though there are empty rooms in the building. 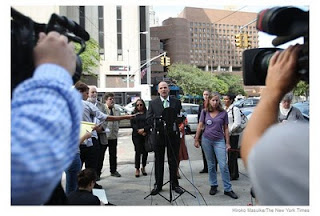 On Thursday, I joined a UFT press conference at Murry Bergtraum HS, where Michael Mulgrew  reported  on the 7,000 classes that violate the union limits, with more than 250,000 students sitting (or standing) in these oversized classes during the first ten days of school.  (Contractual class size limits – already far too large – are 25 students in Kindergarten; 32 students in grades 1-6:  33 students in non-title I MS; 30 in Title I MS; 34 students in HS; and 50 students in gym.)
Most of the violations this fall, as usual, are in our large overburdened high schools; with classes of 35 students or more at Benjamin Cardozo (302); Long Island City (207); Lehman (270) Murry Bergtraum (104); and John Dewey (102). 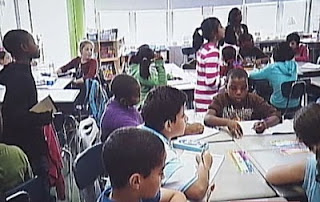 But  there are many violations in elementary and middle schools as well, including Petrides in Staten Island with 44 classes over the limits; MS 210 in Queens with 43; Bronx PS 83 with 33; Brooklyn’s IS 318 with 31 and PS 169 with 24. The UFT also reported that there are 7,000 fewer teachers than in 2008 – despite increasing enrollment.
As John Elfrank-Dana chapter leader at Bergtraum explained, though the administration will eventually address some of these violations, these students will have been shuffled from class to class for weeks, losing out on a crucial period of time to engage in learning and bond with their teachers.  Moreover, some violations will remain, despite grievances.  In any case, class sizes will likely increase for the fourth year in a row, with children in grades K-3 suffering from the largest classes in eleven years – and research shows that these are critical years in which class size helps determine the trajectory of their academic achievement and future success in life.  In many schools, we are seeing class sizes in these grades jump from 21 or 22 to 30 or more – especially as the DOE refuses to honor the cap of 28 students per class in grades 1-3, which they did for many years.
As usual, Walcott and the DOE spokesman responded with their usual pablum about how they are focusing instead on teacher “quality”; but I pointed out that even the best teachers cannot do their best with class sizes this large.  I also provided a flyer from Bloomberg’s 2002 campaign for Mayor, showing how he promised to reduce class size, especially in the early grades, because, as it points out, 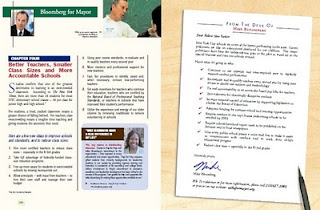 “...studies confirm that one of the greatest detriments to learning is an overcrowded classroom. …For students, a loud, packed classroom means a greater chance of falling behind. For teachers, class overcrowding means a tougher time teaching and giving students the attention they need.”

In his campaign literature, Bloomberg concluded that “NYC families have been waiting long enough.” Our children are still waiting, many of them in even more overcrowded classes than when he was first elected, due to the mayor's negligence and the flawed priorities of those he picked to run our schools.
(For more news on the class size violations this year, see GothamSchools, NYT, Daily News, NY1, WSJ, Fox News, DNA info, and  UFT.)
Posted by Leonie Haimson at 9/24/2011 06:26:00 PM

We have the same problem at PS 169 in Brooklyn. Fifth grade classes are at 33 and first grade classes at 30 despite the fact that there are rooms and space available which could be used for classrooms.

It's nice Mulgrew's getting this info out there (a little bit). I'd like to see my union dues used for TV and newspaper ads explaining the overcrowding while thousands of ATR's are left to languish doing sub-duties.

As the reign of Bloomberg winds down, I'd like to see Mulgrew fight with the fervor of Leonie.

It would indeed make a lot of sense to create new classes and assign ATR teachers to them. Bloomberg would rather lose money, pack kids like sardines, and use ATR teachers as anti-union propaganda for a mess in which he certainly had a hand.

More important than class size or just about anything else is teaching each kid to read well.

You'd think that teaching kids to read well would be an obvious goal. However, the fact that most remedial reading programs have ceased to exist and many Literacy Specialists now languish in the ATR pool speaks volumes.

Charter school are a great way to go! I highly recommend looking into it more deeply if you are considering. You can also leave a parent review of you charter school at www.mykidsschool.net so more people can learn the pros and cons. It's a great informational site.