Video of Mayoral forum, moderated by Diane Ravitch; and will Bill Thompson ask Merryl Tisch to stop the sharing of students' personal data with inBloom?

It was an encouraging evening.  All said no more graded school report cards; all said in (a rather vague way) they would work for smaller classes.

Asked about whether they would expand charters and/or stop providing free space, Thompson said he would support a moratorium on co-locations and would focus on the million students on public schools; Albanese said that charter schools are a distraction and a way to attack organized labor. De Blasio used the issue to point out Quinn was not present, attacked Eva Moskowitz, and said he would start protecting existing schools rather than force co-locations on them.  Liu said that the deck was stacked in favor of charters because of their school population of fewer at-risk kids, and their extra funding.
He said, what kind of message are we sending to the public school children in the co-located building", that they are second class citizens?  (Unfortunately, none of them said if they would start charging charters rent.)

Best part of forum is is at 59.30 minutes in, when Diane asks whether they would pull out of the state and city plan to share private student information with inBloom Inc.  The audience, claps, and all the candidates vociferously respond, "absolutely not!"  Each of them point out the huge risks and conflicts of interest involved, especially as inBloom's operating system is being built by Wireless, run by former Chancellor Joel Klein, and owned by Murdoch's NewsCorp -- with a terrible record on privacy.

Thompson agrees that this is outrageous: "We are NOT going to release personal student information."  He mentions that when he was head of the Board of Education, the Police Department wanted personal student data turned over and he refused. "Will we turn this information over to inBloom, NO WE ARE NOT," he says vehemently. 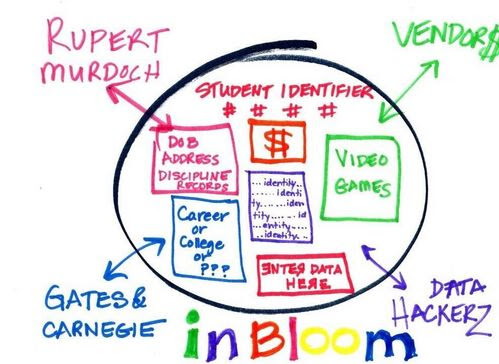 Yet Bill Thompson's campaign chair is Merryl Tisch, who is 100% behind the inBloom plan as Chancellor of the New York State Board of Regents. New York is now the ONLY participant in this scheme that is going ahead with sharing personalized student data from the entire state, now that Louisiana, Georgia, Delaware, and Kentucky have pulled out.   If Merryl Tisch said no to inBloom, she could stop it in a dead second.

On Tuesday, there is a protest at Teacher's College graduation against awarding Tisch a special honor. Here is a letter from Celia Oyler, a TC professor about this; and an article by Fred Smith, a TC alumnus explaining why.  Tisch has supported high stakes testing, the evaluation of teachers by means of test scores, school closings, the expansion of charters, and now, the sharing of personal student data with private corporations without parental consent -- all policies opposite to Thompson's public positions.

At the very least, Thompson should ask Tisch to stop the inBloom project now.