Reprinted from  Raginghorseblog by Patrick Walsh. 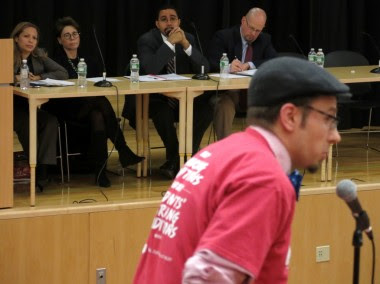 Unlike the authentic and enraged voices of parents and teachers that Commissioner John King encountered in every corner of the state he dared show up in to peddle his wares on our dime, many of the voices King heard on the past two nights in Brooklyn and Manhattan respectively have been melodious indeed, if also largely synthetic and out right obsequious. For this King can give thanks to the machinations of billionaire funded corporate education fronts groups Students First NY and Educators4Excellence.

Even if they were thwarted from hogging almost every one of the 45 two minute speaking slots, as they had in Brooklyn on Tuesday, the confederacy of corporate shills and paid operatives ( many of whom spoke at both “forums”) did successfully put on a show of obeisance to the Common Core State Standards that was sure to please their masters even as it bore no relationship whatsoever to 99.9 % of working career teachers who loathe the thing and all that comes with it.

Unwittingly, the corporate advocates also provided not a little bit of entertainment, albeit in the form of black humor. Take for example the E4E guy who proclaimed to all and sundry that he was “a good teacher” before the implementation of Common Core but now, due to the miraculous intercession of Common Core he had become “a great teacher.”

This, mind you, was not presented as wicked, guerilla satire.

Then there was the teacher from John Adams High School who strode down to the mic with seven students in tow only to ask that all eight of them be allowed to speak, as somehow they constituted one entity. For some reason, this was allowed. And it was the defense of this break from protocol that merited the only words that Meryl Tisch spoke all night.

Hey! Nice work if you can get it!

The teacher then went on to tell the crowd that he taught a class in “critical thinking.”

By way of explanation he actually said, “We get together and critically think.” The insinuation was that “critical thinking “ did not exist or was wholly unknown in the public school system ( and perhaps to homosapiens in general) before the advent of the Common Core. This insulting and absurd sentiment, to one degree or the other, was echoed by the E4E contingent all evening, a bizarre position, indeed, for an organization that obliges new members to sign a what amounts to a pledge of allegiance to its corporate dictums.

At any rate, if the man’s students are any indication, the sorry guy does not even know what the words “critical thinking ” mean. One student after another strode to the mic only to recite words that sounded to all the world like nothing more than Common Core press releases.

A crisis in education, indeed!

One wonders how such people ever got to be teachers. Or why.

In fact, listening to these folks, a stranger would be forgiven if you concluded that standards themselves were non-existent before the coming of the Common Core. As if, that is, before the Common Core and corporate fronts like E4E and StudentsfirstNY, teachers and students did little more in school than kind of hang around, looking out windows or watching game shows on TV.

But, for the moment at any rate, at least these speakers were, in fact, active working teachers. Not so the three twenty something know-it-all “ ex- teachers”, whose love for the Common Core Standards is exceeded only by their love for their former students — even as they forsook the teaching profession after two or three years to save schools from bad teachers and raise expectations as paid operatives of StudentsFirstNY. (One understands their affinity with King as, like them, it only took King three years of teaching to know everything there is to know about it.) Indeed, it seems the further removed one is from actually working under Common Core the more rhapsodic one grows about it. Consider “ex – teacher “ Miranda Cohen who rose to declare the she was behind CCSS not merely 100 % but “150%. ”

And who is this “ex teacher?” Nothing other than a staffer for Students First NY working tirelessly and selflessly to raise expectations, ferret out “bad teachers,” and instruct those remaining on how to do their job.
Herein her story from the StudentsfirstNY website: “As a 9th grade teacher at a failing school, Miranda was driven to provide her students with the same excellent instruction and guidance that she herself received in Massachusetts.

After teaching for two years, Miranda moved back to New York to begin a Community Organizing Fellowship with StudentsFirstNY, as she sought an opportunity to have a meaningful impact outside of the classroom. Miranda is deeply committed to raising the level of expectations that communities have for both their teachers and schools.”

There was even a speech by a young lady who presented herself as a member of E4E at the same time she was a chapter leader for the United Federation of Teachers (UFT.)

This is a vomitous and incoherent combo if there ever was one but also one that has to be some kind of wet dream for E4E sugar daddies Whitney Tillson and Bill Gates!

I swear I’m not making this up.

One thing that was noticeably and gratefully absent, despite the fundamentalist fervor of the shills, was the obscene and horrific (if politically manipulative) notion that reportedly dominated Tuesday night’s forum in Brooklyn: the idea that, somehow, the implementation of Common Core was nothing less than a matter of civil rights and all who opposed it did so because they are racists who sadistically wish to condemn children of color to the ignorant underclass for perpetuity.

In between and after this exercise in self-righteousness and farce were many statements from parents and teachers that moved from the wise to the poignant to the heartbreaking.

One mother spoke of her child experiencing suicidal ideation that she attributed directly to the demands and stress of the Common Core.

An hour or so later, a similar statement was made by yet another mother.

King and Meryl Tisch answered both statements with silence.

This too was answered with silence.

Leonie (“ The Lioness”) Haimson of Class Size Matters challenged King directly to explain the legality and purpose of the data mining of InBloom, data mining which has already been rejected by many states due to parent pressure but not in New York.

King danced the watusi, the twist, and the bossa nova but never came anywhere near answering Haimson’s query.

Leonie was not surprised.

Testing expert Fred Smith called for a moratorium on testing due to the shabbiness of their production offering example after example of the shoddiness of the work.

Parent activist Noah Gotbaum spoke passionately and personally about an entire array of DOE policy failings, including the fact that the Common Core barely even acknowledges the existence of never mind the realties of special needs children.

Not a word in reply.

Members of the MORE Caucus of the UFT, myself included, made their presence felt and heard through the long, weird night.

Perhaps the most challenging question of the evening was asked by a middle aged African American teacher who spoke poignantly of his upbringing in the South where he was raised by his grandmother and was an excellent high school student, only to discover that he was far behind his peers when he reached college. He declared himself a Common Core agnostic but asked a crucial question: if not common core, what?
It is a question that opponents of the Common Core must answer. Indeed, we ignore it at our peril.

For King and his subjects in StudentsFirstNY and E4E, we are the problem, not the Common Core.
The Common Core said King, offering no evidence whosoever, will “ create a “ citizenry ready for the 21st century.”

It was declarations such as this that led to my own question, the second to last of the night.

I told King and Tisch and all present that I am in awe of the Common Core, not as an educational tool, but as a political phenomenon. How a thing that was funded by Bill Gates and created by creepy entrepreneurs like David Coleman and Pearson Inc in a secrecy akin to that of the Manhattan Project could become signature educational policy of a Democratic president, applauded by both the American Federation of Teachers and the National Education Association, is mind boggling and without precedent in American history.

Furthermore, as the effusive praise and cult like mantras of the untested experiment gave evidence, I am equally in awe of Common Core as an exercise in mass perception management and public relations. But I wanted to know this: as the proponents of the Common Core were so unconscionably reckless as to impose the thing on a nation (spare me the “adopted in 45 states” line), where was the evidence to back up all these magical expectations? Or put another way: why was my child, as was every child in the nation, being used as a guinea pig in their experiment?

My question, like all questions of substance, was ignored. Very tactfully. Answering questions, after all, was not at all what the “forum” was about.
Posted by Leonie Haimson at 12/13/2013 05:16:00 PM