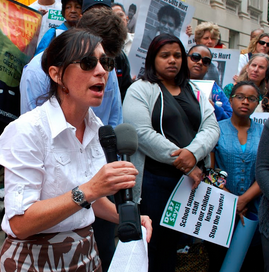 To submit your own comments on the city's Contract for Excellence/class size proposal, email ContractsForExcellence@schools.nyc.gov  by July 19.  If you'd like to share your comments on the blog on class size, please email us at info@classsizematters.org

My name is Tory Frye and I am the parent of public school students in Districts 5 and 6 and am an elected parent member of CEC6.  I am here this evening representing thousands of District Six parents; I’ll tell you why I think this is true in a moment.

We know that the primary purpose of the C4E is to reduce class size and yet the DOE has chosen not to do this.  Our CEC6 President has spoken eloquently on why reducing class size is so crucial in our district, which has a significant proportion of current or former English Language Learners, as well as special needs students (and often students who are classified as both).  Educators, students and parents will testify to the difficulty of teaching and learning for these students in large class sizes.

Here are the facts about class size in D6:

-       13 schools are over 100% utilization, including PS/IS 187, which is blocks away from the Mother Cabrini High School, which the DOE has handed over to Success Academy, a school that was never desired in our district, despite an overcrowded and high performing school mere blocks away.

-       So we have class sizes that exceed the CFE targets and the need for additional seats in our district just to reduce current, non C4E-compliant, overcrowding.

-       We reject the excuse that the state has not provided the money and ask that Mayor de Blasio use his influence to get the money we are owed in order to reduce class size and/or use the city funds to achieve these goals.

-       To return to why I think I speak for thousands of D6 parents?  Here is our analysis of the Learning Environment Surveys for D6: