UPDATE:  I heard from Chancellor Fariña this (Friday) afternoon; she writes that an additional 2nd grade class will be opened.  Congrats to the parents -- and especially the 2nd graders at PS 85Q. 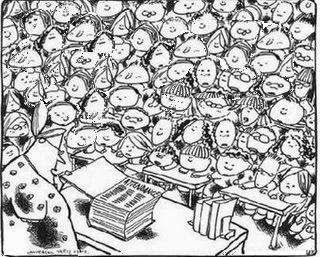 Class sizes last year in the early grades have steadily grown and last year were the largest in 15 years.  Unfortunately, the de Blasio administration has done nothing to reverse this damaging trend  -- despite specific promises he made during his campaign  --and refuses to allocate specific funds either from the state or the city to reduce class size.  The UFT contractual limits have also gone unchanged in 40 years -- though a few years ago, the DOE stopped recognizing a "side agreement" to cap class sizes at 28 in grades 1-3.  As a result the number of children in classes 30 or more have ballooned in these grades. Here is a letter from a parent leader I received today.  I fear more such reports once school starts.

To Whom It May Concern:

My name is Randi Marshall and I am a parent at PS 85Q in Astoria. I have recently learned that the DOE has decided that our 2nd grade classes should be 36 and 35 students respectively - with no teaching assistant, despite UFT guidelines that say 32 is the absolute limit.

This is completely unacceptable and will set our children up to fail. It will create a chaotic learning environment, where no teacher can truly teach and no student can truly learn.

The principal of PS 85Q was prepared to create a third general education second grade classroom to allow for smaller class sizes; she even selected a new teacher, who has set up her classroom. But just this week, our principal learned that the DOE would not be approving the budget needed for that additional classroom, and that due to arcane and ridiculous rules, the school would not be able to have that additional classroom unless there were a total of 80 general education 2nd grade students (we currently have 71).

So, basically, the DOE is suggesting that officials believe that class size is okay unless it was  as high as 40 (!!!!!!!!!) children in each classroom. Can you imagine teaching 36 or 39 or 40 children in a single classroom with no aide? What child is going to learn in that environment? They don't even have room to write - or hang their coats - or sit on a rug for morning routine. They won't be able to raise their hands to answer a question because the teacher will barely be able to see them. They are seven and eight years old. They deserve better.

New York City has promised for the last SEVEN years to REDUCE class size, under the Contracts for Excellence laws. DOE received funding in exchange for those promises. And now the DOE has asked PS 85Q to hold two classes that are amongst the highest  - if not the highest - it has seen in those same seven years. The Contract for Excellence suggested that the class size goal for 2nd grade by 2011 should be 19.9. That's 20 students - compared with the 36 you are now asking a single teacher at PS 85Q to teach.

This is far from the "appropriate" education our students are promised in New York City.

PS 85Q is a tremendous school. But it can only continue its fabulous work if you don't stand in its way.

We must do better by these children. Please give our principal the opportunity to give these children the appropriate education they deserve. Please allow PS 85Q to open the additional classroom it had been planning - before the school year starts - to continue its amazing educational efforts. Please don't wait - because once these children start their education, you will only disrupt them further if you make the right decision but it is too late. I ask, I beg you in the DOE, the city council and our local District 30 office to make the right decision and do what you can to allow our 2nd grade students to thrive - not fail. And please act quickly.

I look forward to your reply - and this wrong being righted - as quickly as possible.

Small classes and experienced teacher are necessary for success. This is unconscionable.

I cannot thank you enough for all of your help and support. This was an amazing reversal and I am so very happy for all of our second grade students!!