Funny if it weren't so sad: SUNY charter committee switches location of Success charter and switches it back

After the rally protesting the vote by the SUNY charter committee to approve 17 new charter schools for NYC-- including 14 more for Success Academy, despite the fact that two thirds of their schools are already underenrolled, a representative from the city told us that at the last minute Eva Moskowitz decided to switch the location for one of her charters from District 2 to District 1 or District 6, and the SUNY committee had approved this change.

This appalling practice is not all that surprising, given the way SUNY approves whatever Eva Moskowitz wants.  They allow her charters to repeatedly expand, despite the fact that she fails to enroll and retain equal numbers of high-needs students, which is required under the charter law and in fact, pushes out at risk kids with stunning regularity.  The committee also approved a stunning 14 more charters despite the public comments were overwhelmingly against allowing these charters to go forward.

You can see the tepid discussion of the last-minute switch and vote by the charter committee to approve it at about 30 minutes in a video of the meeting at the SUNY website.  You can also see that the committee members did not mention any of the public comment, or even appeared to have bothered to have read the summary beforehand.

The three members of the committee are Joseph W. Belluck,  the chair, Angelo Fatta and John Murad; two lawyers and a retired corporate executive, none of them with any background in education. Also present sowing more confusion in their wake, were Susan Miller Barker, the head of the SUNY Charter Institute, and the Counsel Ralph Rossi.

Understandably, parent leaders from District 1 and 6 and their elected City Council Members were quite angry that there were no hearings or outreach in their districts before this vote.  Despite the fact that SUNY considers this a "non-material" change -- switching the charter from one end of Manhattan to another -- it makes hash out of the public process, including district hearings, required by the law.  Few would argue that Washington Heights and the Lower East side are the same in terms of student population as the more middle class areas encompassed by District 2.   So these elected leaders, including Councilmembers Chin, Dromm, Mendez and Rodriguez , along with the presidents of Community Education Councils in Districts 1,2, and 6, wrote a letter to the SUNY board President Carl McCall, which is below, saying that their practice of switching districts and ignoring public input at the last minute reveals their "extreme and marked disregard for a transparent, democratic process."  Here's an article in tomorrow's Daily News about the letter and the anger aroused by this switcheroo.

I contacted the reporter, Liz Harris, who assured me that SUNY had told her that there was no such change and that the school had been approved for District 2, though this might later be changed if Eva wanted.  They told the same to the DNA Info reporter, who posted a correction to an earlier article that had reported on the last-minute switch:


However, SUNY did not allow Success Academy to change its application, said a spokesman. Instead, it approved its District 2 charter “after undergoing the legally required process, including a public hearing,” he said.“The Institute was notified that Success may pursue alternative arrangements in Districts 1 or 6, an adjustment which, for a variety of reasons, is not uncommon for a charter school,” he said in a statement.
“Should they follow that course, under the law and well established practice the Institute can amend the charter accordingly, and there will be a process for additional public input.”


But as the DNA info story noted, SUNY posted the following document tonight, showing the charter had  been moved to District 1 or 6 after all.  Check out the time stamp of 6:25 PM. 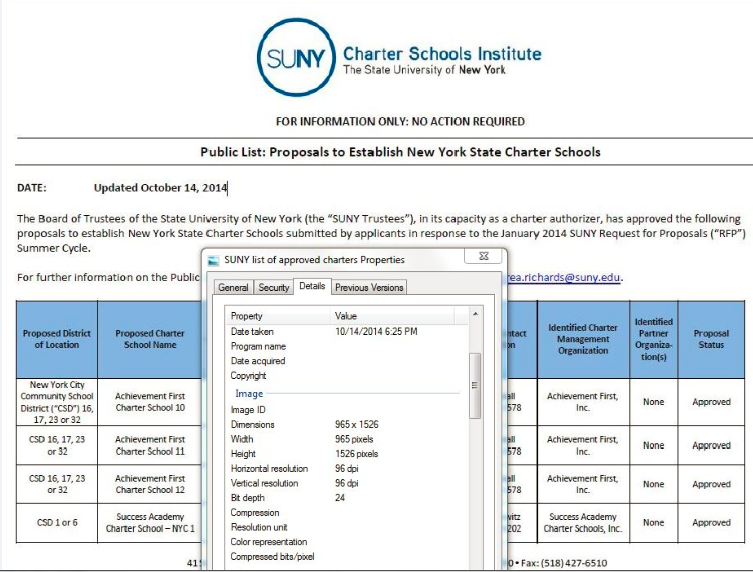 CM Chin saw the new document and tweeted it:

Apparently noticing the article or CM Chin's tweet, someone at SUNY Charter Institute took down the document and revised their version of reality once again -- that the switch to District 1 or District 6 had not occurred after all:

It would all be a comedy of errors if it weren't so terribly sad.

Who knows what happened and how many ways back and forth the truth was revised? The indisputable reality is that these three men make such consequential decisions by authorizing and randomly siting 17 new charter schools,  in such a cavalier fashion, without any knowledge or apparent interest in the views of the community or impact on their schools, and our public education system as a whole.

democracy days are over people. the world gets more and more corrupt by the day so long charlie