Come learn about threats to student privacy at NPE conference April 25-26 and much more! 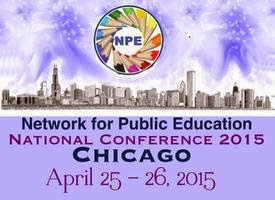 The Network for Public Education is having our second annual national conference April 25-26 in Chicago.  Last year’s conference in Austin was a blast, and this year promises to be even better.  Check the NPE website , and the full schedule of events here.

Diane Ravitch, NPE's President and co-founder, will moderate a conversation with NEA president Lily Eskelson and AFT President Randi Weingarten. I expect Diane will ask some probing questions in her inimitable fashion.


We will also discuss student privacy.  Last July, after inBloom was defeated, Rachael Stickland of Colorado and I formed a new national group called the Parent Coalition to Protect Student Privacy.  (You can join our mailing list by signing up here.) Rachael and I will be speaking on a panel about the continuing threats to student privacy and autonomy posed by the sharing of personal information with ed tech vendors, along with high school student Nathan Ringo of Minnesota, who challenged his school’s use of computers to monitor students,  and Cynthia Liu of K12 Network, who helped lead the battle against Los Angeles school’s billion dollar IPad purchase, which is still under investigation by the FBI and contributed to the departure of Dr. John Deasy, LAUSD superintendent.

For hotel accommodations, rooms are still available at both the Drake (Hilton.com) where the conference will be held, and Residence Inn (Marriott.com) nearby.  There may be some group discounts still available.  Check the registration link here.  If that doesn't work, you can try the reservations desk at 866-596-7890, and request the Network for Public Education room block. But in any case, please come!
Posted by Leonie Haimson at 4/07/2015 11:25:00 AM