More on the results of the parent survey and the question left out in Schoolbook and the NY Daily News.

When the results of the DOE's Learning Environment Survey were released yesterday,  the administration took credit for high rates of parent satisfaction, though reporters pointed out the satisfaction rates were the same for the last three years and this year, only about half of all parents bothered to respond to the survey.

Yet what was most striking was the question that was left out.  This question had been asked of parents since the survey was first given:  Which of the following improvements would you MOST like your school to make?  Every year since 2007,  which was the first year the survey was given, smaller classes have been the top priority of parents by far, among ten choices. 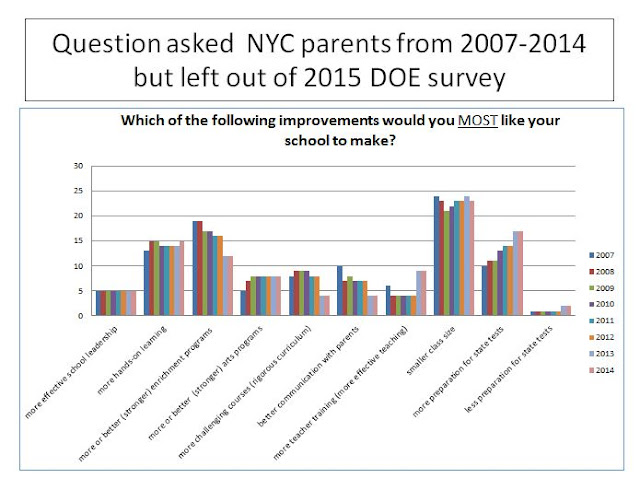 The question was included in the survey because of the insistence of parent members of the focus groups organized by Jim Liebman, then head of the Accountability office, to give feedback on the survey's design back in 2006.    This year, the DOE revised the survey without holding any focus groups at all.

If you look at the 2014 data, smaller classes were even more clearly a top priority of NYC parents;  as it was either their #1 or #2 priority in all but two out of 32 districts: 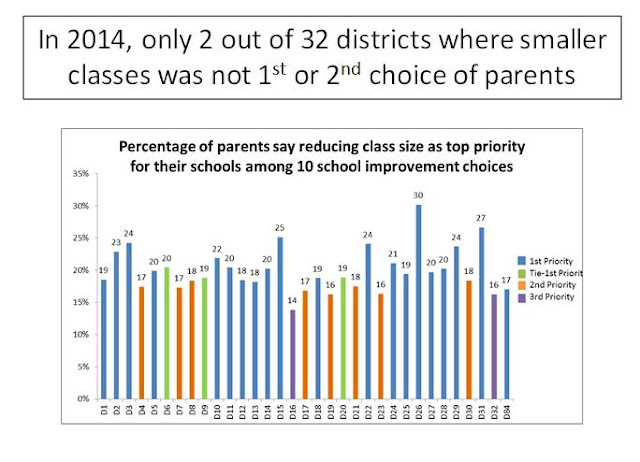 In 2007, parents actually wanted separate questions on each of these issues, especially as regards class size and testing, but instead DOE decided to group them together in this way.  In any event, the results have been an important source of data that could have been used if the Chancellor or the Mayor actually wanted to be responsive to parent concerns.   Unfortunately, since 2007 class sizes have increased instead.

In 2007, Bloomberg tried to obscure the responses to this question during his press conference by grouping together many other options in a new category, called "more or better programs."  I and others, including Patrick Sullivan, called him out on this naked attempt to obscure that class size reduction had been first.  Here is the NY Times article from the time:


Mr. Bloomberg lumped together several categories to note that for 45 percent of parents, “more or better programs,” not class size, was the top priority, despite a fierce lobbying campaign for smaller classes by some parents groups and the teachers’ union.
“When somebody stands up and says, ‘I speak for all parents and we want smaller class sizes,’ that’s just not true,” Mr. Bloomberg said.
Leonie Haimson of Class Size Matters, an advocacy group at which the mayor was clearly taking aim, said the survey pointed to the opposite conclusion. “It’s a transparent attempt to minimize the importance of an issue that is staring everybody in the face as the top priority of parents.”

In 2012, the DOE stopped including the responses to this question in their citywide summaries, though the data was still easy to find in their reports.  Now for the DOE to stop asking this question at all, after eight years, especially for an administration that claims to care about parent input,,  is hugely disappointing.  Here are quotes from yesterday's DOE press release:


Schools Chancellor Carmen Fariña: "... I look forward to working with school communities as they use these results to identify areas of improvement, and develop the right supports and solutions to address them. The more we listen to the feedback of students, parents, and teachers, the better our schools are going to be."

But how can they listen to parent feedback if they refuse to ask them what changes need to be made?  And this quote:


“The retooled survey focuses on dimensions of the school community that past research has found to be critical for improving student outcomes. The goal of this work is to equip schools with actionable information they can use to support teachers and serve students more effectively….” said James Kemple, Executive Director, Research Alliance for New York City Schools at New York University.

I don’t know what is any more “actionable information” or research-based than class size reduction, one of the few reforms proven to help kids succeed, unless the administration is determined not to take action to lower class size, no matter what parents want or the evidence shows .   In fact, class size reduction is one of only a handful of reforms proven to work through rigorous evidence, according to the Institute of Education Sciences.

Of course, the DOE can keep on asking silly questions instead like the following ones, included in this year's parent survey, which are neither “actionable” nor ones that most parents would probably be able to answer:

Sadly, the omission  of the critical question of what changes parents would like to see in their children's schools is yet another sign that though the administration's rhetoric focuses on the importance of parents having "trust" in school leadership, it is difficult to trust their leadership  when they don't  even ask the right questions.