Today it was announced there will be a mixed use development at 425 Grand Concourse in the  Mott  Haven section of the Bronx.  A large apartment complex will be built on city owned land where until recently, a landmark public school building PS 31 once sat.
The city awarded the project to Trinity Financial and MBD Community Housing Corporation, and will be financing it with funds from its ten year capital plan. The city also upzoned the site, to double its development rights and density.  The city will finance the construction through funds in the mayor's 10-year housing plan, which has as its goal to create or preserve 200,000 affordable units.
Yet instead of a public school going into this building, a charter school will be built instead:
The development will include 241 apartments that will be rented to tenants earning between 60 and 100 percent of the area median income — $46,613 to $63,700 for families of three.
The 24-story tower is also being billed as the city's largest passive-house development, meaning that it will adhere to stringent energy efficiency measures. The administration said it would consume 30 percent of the energy of a traditional housing development.
The site will house a charter school, a medical facility, space for cultural programs and social services and a supermarket.

The community and preservationist advocates had tried for years to the save the original building, a beautiful school built at the turn of the century:

P.S. 31 was built in 1899 in the "Collegiate Gothic" style by the innovative municipal architect C. B. J. Snyder, who also designed a huge number of other schools during his tenure as the city's Superintendent of School Buildings. Long referred to as "The Castle on the Concourse." 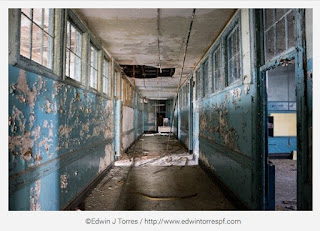 Its commanding presence in the Mott Haven neighborhood, the school was granted landmark status in 1986, before its closure in 1997. Since then, it's fallen into extreme disrepair and is consistently threatened with destruction, with little to no effort made on the part of the city to restore the building to its former dignity. The building has long been seen as a battleground site for Bronx residents and preservation advocates across the city. 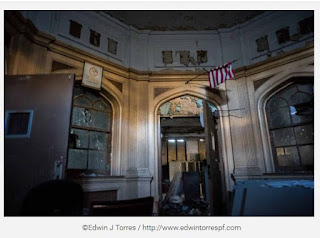 In June 2013, the city argued that P.S. 31 was a "public hazard" and couldn't withstand any more storms, but two years later, the building remains standing and in virtually the same condition. Engineers hired by nonprofit SoBRO argued that "although structurally unsound, the building is salvageable," to such a degree that even Goldman Sachs has expressed interest in investing in the restoration process.

See the petition  to save the building that received nearly 1500 signatures from members of the community. 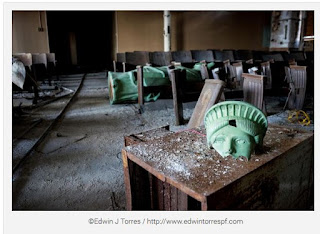 Despite the fact that the city had let the building deteriorate badly, even the Landmarks Preservation Commission voted not to strip the landmark status of the building and urged the city to preserve it.  Yet their vote had no impact on the city's decision.  As the NY Times reported in 2014 .

The Landmarks Preservation Commission had strong words for the owner of an abandoned landmark in the South Bronx — the elegant and imposing “Castle on the Concourse” — which is so dangerously deteriorated that emergency demolition may be the only resort.
“It’s been a disgraceful stewardship,” Elizabeth Ryan, a commission member, said at a public hearing on Dec. 17.

A fellow commissioner, Michael Devonshire, seconded the sentiment. “I find it completely despicable,” he said.

As remarkable as their anger was the identity of the landlord: New York City.... As a landlord, the city is treated differently by the landmarks law than a private owner, who must obtain approval from the commission before altering or demolishing an individual landmark, or a building within a historic district.


By contrast, a city agency receives only a nonbinding advisory report from the commission, which it may embrace, consider or disregard as it chooses....

Roberta Brandes Gratz, an author on urban affairs and a former member of the landmarks commission, took a longer — but no happier — view. 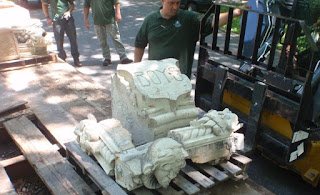 “What a sour note to end the Bloomberg administration landmarks legacy,” she wrote on Facebook.

“The city is a terrible steward of its landmarks and frequently lets them deteriorate ’til they can make this excuse, even though alternative engineers show rescue and reuse possible. Watch a developer scoop this up.”

Which is what happened, in what is now a hot real estate area in the South Bronx.  Even though the Borough President Ruben Diaz had attended PS 31, and had  opposed its demolition,  he applauded the new plan:

“As a proud graduate of P.S. 31, I was sorry to see my beloved school building fall into such disrepair, and even sorrier to see it demolished. However, the Department of Housing Preservation and Development (HPD) and the Housing Development Corporation (HDC) recognized the need for new life and new development at this historic site, and has moved to bring welcome new affordable housing units, commercial activity and a reinvigorated Garrison Playground to the Lower Concourse neighborhood." 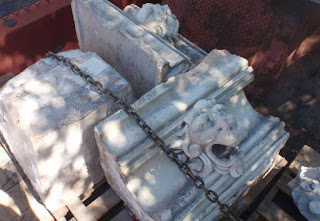 The city did apparently save  some of the elements of the 1899 school building before demolition —including terra cotta gargoyles, heads and the engraved P.S. 31 sign—and will require that the future developer incorporate those salvaged pieces into the new building. More fragments are in the RFP here.

Sadly, these artifacts, including the PS 31 sign, will now apparently decorate a building housing a privately run charter school instead.
Posted by Leonie Haimson at 4/28/2016 01:56:00 PM

So sad. I actually went to a PD there back in 1996 when I first started teaching, It was (is) a wonderful looking building. Now it will be turned into an ugly high rise and and even uglier charter school. Oh yeah, don't expect anything more than crocodile tears from Ruben Diaz. He is an open supporter of the charter school movement. That fact will bite him in the behind if he chooses to one day run for Mayor.