High Achievement NY put out a press release trumpeting a new poll from Achieve -- both organizations funded by the Gates Foundation to promote the Common Core and testing.  Though the poll did find that parents are concerned that their children may not be sufficiently prepared for college and career, there is little to show that the Common Core standards and more testing leads to better preparation.

The results of the poll itself is interesting and shows growing discontent with the testing regime.

See this slide, revealing that 13% of parents opted their children out of standardized tests last year. 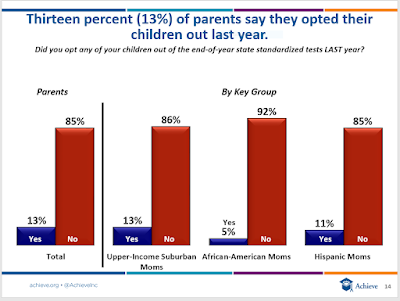 Despite lower rates overall than upper-income suburban Moms (their words, not mine) African-America and  Hispanic Moms intend to opt their children out in greater numbers next year -- with the number of African-American mothers nearly doubling. 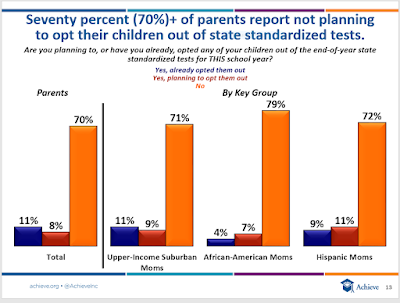 Also, respondents give a variety of reasons for opposing standardized testing, with 49% saying the exams do a poor job capturing their children's true abilities, and 48% say that the exams yield no positive benefits to children taking the exam. Especially interesting is that 53% of African American  Moms say their children are subjected to too many tests. 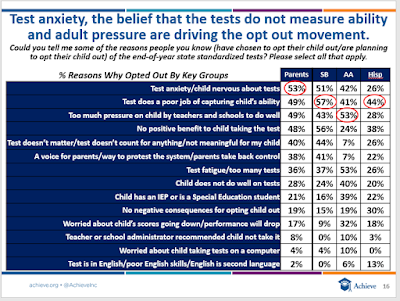 Altogether, these responses must be very discouraging to Gates et. al. which has spent millions of dollars funding organizations and media outlets to spread the message that parents who opt out of Common Core exams are selfish, mean-spirited and misguided.