On the Gates gravy train, The Guardian reports favorably on Bridge International as well 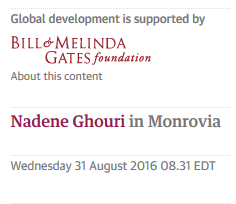 On Tuesday,  I wrote about the reporting in the NY Times by Tina Rosenberg of "Solutions Journalism", which has received millions from the Gates foundation, in favor of Gates-funded projects including Bridge International Academy,  without the Times disclosing any potential conflict of interest.  Then yesterday,  I saw this one-sided article supporting Liberia's no-bid contract to this for-profit chain of schools, published in the Guardian on August 31.  The article is part of their “Global development” reporting – which was accompanied with this logo at its side:

In this case, though the Guardian may have disclosed the sources of its funding, the reporter Nadene Ghouri failed to mention that Bill Gates has personally invested in the for-profit chain.   She also left out much else from her reporting, including how other African countries have threatened to shut these schools down and/or freeze their expansion because of substandard conditions.  Instead she leads with this:

Headteacher Daniel Johnson laughs at the question. “What are my biggest issues? That’s an easy answer. Teachers.”
He waves an arm across the playground of Virginia public high school in Virginia community, Montserrado County, north-west Liberia. “I don’t have enough teachers. Many leave the profession because they don’t feel respected or get paid on time,” he says. “I have to go to their houses and beg them to come to work.”

His complaints, of an overly bureaucratic, centralised and underfunded education service, are echoed in primary and secondary schools across the country....

Bridge began training teachers this month. Its focus is on tech-savvy teaching and staff monitoring. In an attempt to counter absenteeism, teachers will be required to log on daily to a centralised system. They will also use online lesson plans downloaded daily. Josh Nathan, academic director at Bridge, says the system is about supporting “not oppressing” teachers.


See the Gates press release from 2010, announcing their support of the Guardian’s “Global Development” project, which says that this reporting is to be used to “hold governments, institutions and NGOs accountable” for implementing the UN Millennium development goals.

Yet as I pointed out in my post on the NY Times articles about BIA, Kishore Singh, the UN Special Rapporteur on the Right to Education, wrote that by outsourcing its education system to a for-profit corporation,  Liberia was committing a “gross violation” of its education obligations under the Sustainable Development Goal number four.  (This is also mentioned in passing in the Guardian article.)

Yet the Sustainable Development goals are the successors to the UN’s Millennium development goals, so it could be argued that through its current reporting, the Guardian is helping to justify the opposite  of what the Gates grant was supposed to achieve.
Posted by Leonie Haimson at 9/02/2016 01:38:00 PM