Update:  Apparently on the Brian Lehrer show this morning, Mayor de Blasio said he would meet with the parents at CPE I.  Let's hope he follows through and removes the principal post-haste. 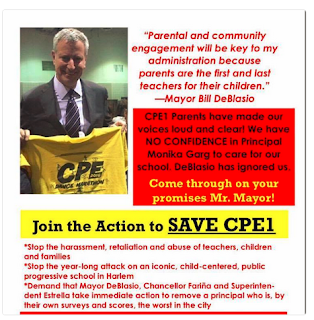 I, the renowned East Harlem progressive elementary school founded in 1974 by Debbie Meier. Since Monica Garg was appointed the principal last year, the school has devolved into angry accusations by parents, teachers and alumnae that she is intent on undermining the morale and democratic spirit of the school and destroy its progressive traditions.

School Leadership Team meetings are now open to the public since we won our lawsuit in October vs. the DOE and Chancellor Farina in a unanimous decision by the NY Appellate Court.

More than 100 people crowded into the music room at CPE 1 to watch the meeting- advocates, parents and teachers from throughout the city, UFT reps, newly elected City Council Member Bill Perkins and former CM Robert Jackson.


At the meeting the CPE parents repeatedly brought up how the principal, Monica Garg, had repeatedly lied to them, had ruled the school in an authoritarian manner, had victimized children by her actions, and had removed at least two teachers who opposed her and put them in the rubber room -- the latest one the UFT chapter leader Marilyn Martinez. 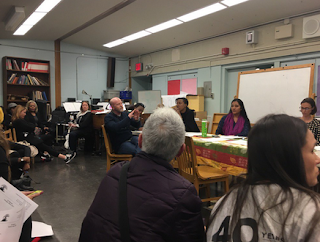 A teacher on the SLT said that every single teacher who challenged her were put under investigation one by one by the DOE. One parent on the SLT, K.A. Dilday, made the point that not a single teacher said they trusted the principal on last year's DOE survey, and the majority of parents at the school have signed a petition asking for her removal. The principal, Monica Garg, then said that many of those teachers have since left the school -- and the audience erupted - of course they did -- you pushed them out!
Finally, parent and SLT member K.A. Dilday read a letter signed by many other members of the SLT, asking her to resign. Garg said she refused to resign and that she answers only to her superiors, the Superintendent Alexander Estrella and Chancellor Farina.
There were so many people crowding the room that the meeting they had to move it to the auditorium. At that point, one after another parent stood up and passionately spoke out how the principal had lied to them, had refused to respond to their concerns about events that had happened at the school, and one parent stood up in tears to say that Garg had grilled her child without her present, and tried to make her admit that her teacher had abused her. 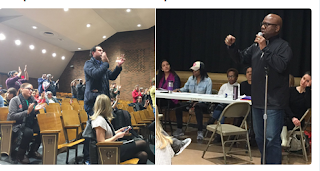 refused to make public. Only one parent at the school spoke in support of the principal. LeRoy Barr of the UFT spoke and said that Carmen Farina was responsible for this problem and she needs to fix it.
Finally, when the meeting was over and everyone had their say, a bunch of parents and a teacher on the SLT held up a banner and said they wouldn't leave until the principal resigned or was removed.
They explained that they had attended every PEP meeting for the last year, directly urging the Chancellor to take action, where she had responded with a dismissive shrug to their concerns.They had sent letters to the Mayor and had petitions signed with over 2000 people asking for him to intervene, with no success.
They then began to sing, we will not be moved, and this little light of mine. They even sang in honor of Debbie Meier's birthday, the renowned founder of the school, who has also tried to intercede on their behalf. The custodian asked for them to leave and said he was going to turn the lights out, and they refused.

Ten to twenty police were there and outside, where a rally for CPE I was taking place, along with Marilyn Martinez, the chapter leader who had tape over her mouth.

The police were constantly on their radio, and apparently, someone in the Police Department or the Mayor's office decided it would not look good to arrest parents, especially in an election year. 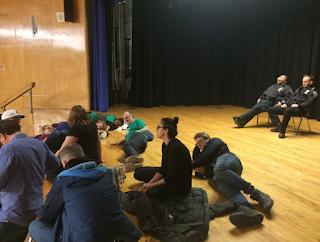 The parents and teacher spent the night in the auditorium, with the heat off and temperatures fell to the 30's, according to Jen Roesch, one of the parents sitting in. Their press release is below.
Whatever side you are on, whether you believe the principal or the parents, the reality is that the principal must be removed for the school's survival.Below is a video from Deb Meier and a press release from parents at the school this morning.

The truth is despite all his promises and talk about how unlike Bloomberg, he would listen to parents, our supposedly progressive Mayor Bill de Blasio and Chancellor Carmen Farina have been just as high-handed and dismissive of their concerns.

From: Jennifer Roesch <jenroesch@gmail.com>
Date: April 7, 2017 at 7:51:08 AM EDT
To: "jenroesch@gmail.com" <jenroesch@gmail.com>
Subject: Parents Occupy East Harlem School Overnight Demanding Principal's Removal
***Breaking Update: Following a meeting of more than 100 parents, teachers and community members, families have been occupying their school at CPE1 since 6:30pm on Thursday, April 6th. The DOE has promised to send someone to meet with occupying families at 8am. Parents are asking Mayor de Blasio to step in and resolve the crisis at CPE1 by removing Principal Garg immediately. Supporters and families will be holding a press conference and rally at 8:30am to explain their demands and next steps in their struggle.***
BREAKING NEWS RELEASE
CONTACT: Jen Roesch (917) 319-7008 or jenroesch@gmail.com
Kaliris Salas-Ramirez (718) 704-7387
Kenya Dilday, kdilday@gmail.com
Parents Sitting In at Central Park East 1 to Demand Principal’s Removal
Letter Sent to Mayor DeBlasio asking him to personally intervene after DOE’s failure to address long-standing issues
Majority of Families Want ‘Worst Principal’ in NYC Out; Retaliation Against Teachers, Abuse of Parents, Children Must Stop
Afternoon of April 6th, Central Park East 1 at 1573 Madison Avenue: Parents, including members of the Parents’ Association leadership and School Leadership Team, are currently refusing to leave their school until their principal, Monika Garg, either resigns or is removed. They say they represent a majority of parents who have signed a statement of “no confidence” in the principal. This letter was presented at the School Leadership Team immediately preceding the sit-in. Other parents and supporters are holding a solidarity rally outside.
Parents say they have appealed to the DOE for over a year about significant concerns but have not had their needs adequately addressed. Garg is statistically the WORST principal in NYC: she has had the greatest drop in ratings from parents and teachers on the 2016 DOE school survey of any principal in the city and oversaw the city’s largest drop in test scores after her traumatic first year at the helm (2016). NYC has approximately 1800 public schools. They are refusing to leave until Mayor De Blasio intervenes. They cite his claim that his administration will make parent voice and building trust in our schools a top priority.

Parents cite serious concerns about Principal Garg’s leadership, including abuse of teachers, children and families. Two teachers have been removed from the school for investigations that parents consider retaliatory in nature. The investigations come in the wake of an open letter signed by tenured staff expressing concerns. Another third of the teaching staff left at the end of last year. All tenured teachers have faced investigations and disciplinary action under Garg’s tenure.
Parents say that children have been harmed as a result of these investigations. Garg interviewed very young children without parents’ knowledge or consent. Many only found out as a result of other parents whose children had told them. In one instance, a 7-year old child had documented emotional issues and was being assisted by the school guidance counselor. This child was interviewed without his parent or his guidance counselor being informed. He was asked about 2-year old incidents and told that his cooperation was necessary in order to keep his school safe. This parent failed to receive an answer to her concerns from either Garg or the DOE. More than 55 parents filed complaints with the DOE without any response. Children in the classes with teachers removed are suffering emotional and social distress and have not received proper support.
Since her appointment in 2015, which came via a questionable process, Garg has deliberately fomented division, mistrust and turmoil at the iconic public progressive elementary school. With the support of District 4 Superintendent Alexandra Estrella, Garg has harassed and retaliated against teachers, mistreated students and families, and undermined the school’s successful practices.
Posted by Leonie Haimson at 4/07/2017 11:31:00 AM

it's a real indication of where the schools are today when a despised and toxic principal can state that she only answers to her superiors, and not the parents. It also clearly suggests that those (inferior) superiors support her, and not the students, teachers and parents.

Grandma Farina, Godmother to all these beastly principals, has got to go.

Thank you for reporting on this, Leonie. This is why mayoral control is such a travesty: the people have no recourse. Astounding, for a public institution.

Mayor de Blasio said he would meet with the parents at CPE I. Let's hope he follows through and removes the principal post-haste. Let's hope he treats these parents with more respect than he treated parents from the Opt Out movement. Thank you for this account. What brave and dedicated families at CPE1. This is what Democracy looks like.

I worked under her for two years when she was an AP. As a fairly new teacher I needed support. All she did was tear us down, lie, make stuff up and act like a total diva despot. She seemed to find joy in psychologically torturing us. It was an all-immigrant school, so the parents couldn't stand up for us. When it was learned that she (and her evil boss Minerva the Racist) were leaving, the teachers and students actually erupted in cheers in the lunchroom. No joke. The DOE placed Garg there to bust up the school because it doesn't fit into the new metrics of success. That's what happened at my lovely little school. Minerva came in and caused an 80% staff turnover through firings and mental torture. She brought in Garg to finish the job. Most of the staff was planning on leaving before they were pushed out by the Internationals Network. We still have it tough here, but it is better.