Last night, Chalkbeat reported on Johanna Garcia’s complaint to the US Department of Education about DOE’s ongoing violation of student privacy rights by releasing her child’s personal information to charter schools, including Success Academy, for the purpose of sending multiple mailings of marketing and recruiting materials. Johanna's FERPA complaint makes the legal arguments clear.

Though the DOE claims they can disclose this information without parental consent under the “school official” exception to FERPA, because it has an “educational benefit” in their eyes, they fail to explain how charter schools can be defined as school officials.  Federal law and guidance reserves this term for school or district staff, volunteers, or contractors who are under the control of the district and perform an institutional service or function for the district. How charter schools can be seen as under the district's control or to be performing a service for DOE is impossible to maintain.

And while DOE and Success Academy claim they only receive student names and addresses for this purpose, they don't explain how charter schools are apparently able to differentially recruit students according to their academic records, as Johanna reported from her own experience, with charters sending her masses of pamphlets and flyers, urging her to enroll one of her three children, but none sent in the names of her other two children, who have IEPs.

The Chalkbeat article cites similar controversies over the non-consensual release of personal student information to charter schools for recruiting purposes in Chicago, Nashville and Memphis, but omits these facts: 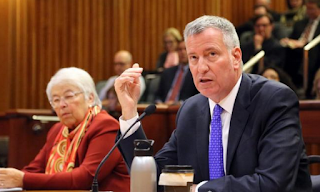 Here in NYC,  we also have mayoral control, but with a newly re-elected progressive Mayor, who claims to be focused on improving the opportunities of public school students over the interests of charter operators.  Yet for some reason, DOE officials are intent on continuing this practice voluntarily, even if it violates federal student privacy law.

That the DOE seems intent on continuing this practice though it began under the previous  Mayor is also hard to explain, given how it is aimed at helping the charter schools to expand their “market share” as Eva Moskowitz put it in emails to former Chancellor Joel Klein, which will inevitably lead to further diminishing the funding, space and stability of our public school system.

The release of this information without parental consent also violates specific promises Bill de Blasio made to parents when he first ran for Mayor.  See his responses to the NYC Kids PAC 2013 survey here, as recorded by his campaign manager Emma Wolfe, in the midst of the controversy over inBloom:

If the DOE and the de Blasio administration were wise and respected children's right to privacy, they would immediately cease this practice and apologize to parents, as Chicago officials did.   At the very least, DOE should be obligated to ask parents for their consent before releasing their children's information to  charter schools.  Unfortunately, their response to Johanna's FERPA complaint as reported by Chalkbeat signals otherwise,  that they intend to dig in their heels and continue to violate the law.