I responded this way:

Here's another one: @billgates admits he was wrong about everything K12 & pulls out of funding charter schls, data-mining, #commoncore & online learning. Instead he will push for small classes & real personalized learning as he & his kids benefited fr/ at their private schools https://t.co/sLzz4b8PCX
— leonie haimson (@leoniehaimson) December 28, 2017

Since then the tweet has been retweeted more than one hundred times and liked another 140 plus times as of 4 PM today. 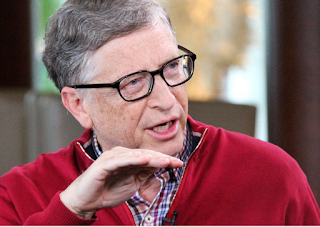 Unfortunately, too many people didn't read the tweet to which I was responding  and believed this to be actual news - that Bill Gates had actually seen the light.  Here are some responses:

Wow! Doesn’t surprise me in the least! Being a teacher myself for over 23 years- I could’ve set him straight long ago.

Random thought: I kinda want to note that realizing you were wrong about something isn’t easy, and if you have more money than sense you can surround yourself with sycophants to agree with you. I don’t want to take a patronizing victory lap when someone admits they were wrong.

Another: Better late than never! At least he learns from mistakes.


If only that were true.

I don't want to be the inadvertent purveyor of #fakenews in this year  -- in a year of so much of the same.

So you heard it here first:  As far as I know, Bill Gates has NOT renounced his support of any of the above policies, including charter schools, online learning, Common Core standards or the data-mining of students.

He did NOT say that he would push for meaningful research-based reforms in our public schools like small classes, or any of the other benefits provided him or his kids at their private schools.

This is easily ascertained by looking at his foundation's recent K12 grants.

Compare that to this grant in June: $10 million "to support implementation of the Summit Learning program in targeted geographies."  This will help them expand their online learning platform further into public schools, where it has  caused many students to become bored and disengaged, according to their parents, and to lose the control of their children's personal data to the CEO of the Summit charter chain, without their consent.

He may be getting older, as are the rest of us, but apparently no wiser.