Why PS 25 Eubie Blake should be celebrated rather than closed

Chancellor Farina has proposed closing many schools that don't deserve this fate, including the middle school at Wadleigh in Harlem and PS/IS 42 in Queens, whose communities have rallied to save them from extinction.

Yet the most unfair of all these proposals involves the proposed closure of a small zoned elementary school called PS 25 Eubie Blake in District 16 in Brooklyn, which has gotten little attention so far in the media, save for a story in a small community paper.  Why?

According to the DOE's own analysis, displayed on its School Performance Dashboard, PS 25 is the second best elementary school in Brooklyn and the fourth best elementary school in the entire city when the need level of its students is taken into account.  It also outperforms every Success Academy charter school by the way in its positive impact -- except for Success Academy Bronx 2.  (You can check out the relative impact ratings of all NYC schools, both public and charter in this spreadsheet.)

If it closes, the entire building will be left to Success Bed Stuy 3, which is now co-located with PS 25.

The only three elementary schools which have a greater positive impact on student achievement, out of 661 elementary schools citywide, according to the DOE, are the Walton Ave. school in the Bronx, PS 15 in Manhattan (the latter recently taken off the Renewal list) and PS 172 in District 15.  It also recently was named a Reward school by the state.

(All the data below can be found on the school's performance dashboard, linked to above.)


And yet its students have improved sharply on the state exams in recent years --  to levels far above even the city average:

The school met expectations in all framework scores, according to the School Survey and Quality Review, and exceeded in four of them  -- effective school leadership, trust, collaborative teachers and student achievement: 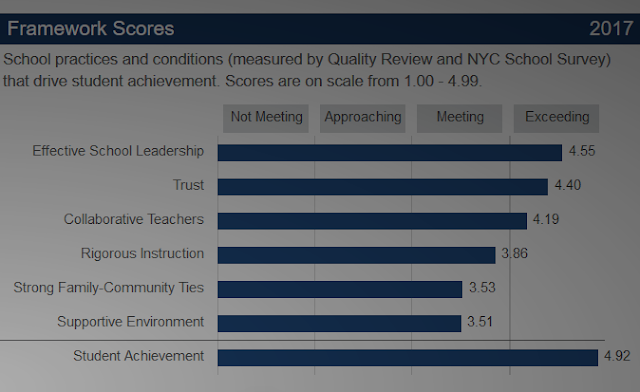 Here is the DOE chart, showing PS 25's positive impact compared to the other 661 elementary schools in the city: 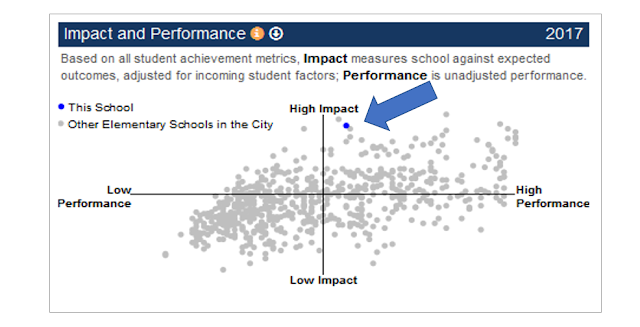 The school outperforms other elementary schools with similar populations in terms of proficiency on the state exams by an astonishing  21% in ELA and Math. 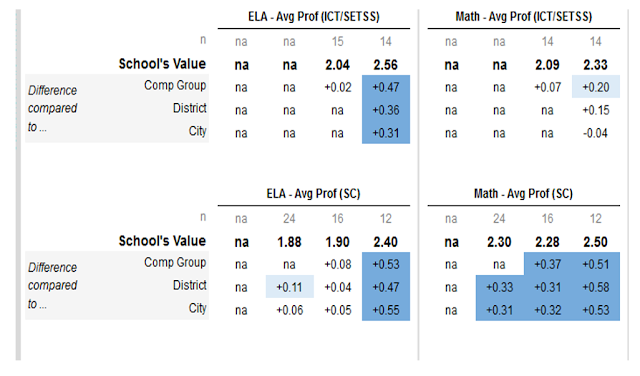 So why does the Chancellor want to close PS 25, given this exemplary, even stellar record of achievement?  The Educational Impact Statement says the school is being closed "based on low enrollment and lack of demand from students and family."   According to the EIS,  PS 125 is serving only 94 students this year.

Yet many of the public schools in District 16 are losing enrollment, in part because of the super-saturation of charter schools in the district. Moreover, families in these neighborhoods haven't been told that according to the DOE's analysis, the school is the second best in the Brooklyn in terms of its positive impact on student achievement, and the fourth best in the entire city;  if they had, they would be far more likely to enroll their children in the school.

When I spoke to three of the CEC members, they too had not been informed of the DOE's assessment showing that the school's impact far transcends every other school in the district -- charter or public.  The Chancellor could also put another preK in the school, or place a 3K in the building if she wanted its enrollment to grow.

The fact that the school is under-enrolled is also likely one of the reasons  it has succeeded so brilliantly, with exceptionally small class sizes that range from 10 to 18 -- the sort of class sizes and teacher support that all high-need kids in poverty should receive.

There are also legal issues involved in the proposed closure of PS 25, which is the only zoned elementary school in the neighborhood.  Any change in zoning lines, including the elimination of school zones, requires a vote of the Community Education Council.  So far no such vote has been scheduled, though members of the CEC have expressed support for its proposed closure because of its low enrollment.

If the school is closed, the teachers will likely enter the Absent Teacher Reserve, meaning they will be paid full salary to act as substitutes or rove from school to school, without ever being assigned their own classes or being used to reduce class size.  What a waste!

In any case, closing a public school which has provided its students with such a rare opportunity to succeed would be a travesty in my view.   The DOE should be celebrating, emulating and expanding this school rather than closing it.

For more on what the DOE's own data shows about this school, check out the power point below.  The vote will occur on Feb. 28 at the PEP meeting at Murry Bergtraum High School in lower Manhattan.

Wow! That's amazing work--you and Class Size Matters for the research; and the students, parents and staff of PS 25 Eubie Blake for their achievements.

Why is this high-performing school on the chopping block?

The rationale provided by the NYC DOE Educational Impact Statement is that the school should be closed despite its high performance because the school is small. Why have they concluded that "smallness" is a detriment as opposed to a possible driving factor in PS 25's increasing test scores?

As the daughter of a PS 25 alumna, I've been following closely the news about PS 25. I was not aware, however, that closing PS 25 would remove the only zoned elementary school from district 16. Rereading the Educational Impact Statement, I noticed there are only three districts in New York City that have no zoned schools: districts 1, 7 and 23.

District 23 shares a significant border with district 16. Closing PS 25 would create a large swath with no zoned elementary schools. Is the NYC DOE at all troubled by that?

Under the previous administration DOE convinced district 7 and district 23 CECs to approve the elimination of all zoning lines because this would facilitate them closing zoned schools and putting charters in their place. Whether this administration cares a whit either way about this issue I have no idea. To my knowledge however this would be th first time that an entire DoE building would be given over to a charter school.

The De Blasio and Farina should be taken to task for trying to close a successful public school. Hope this closure can be prevented.