The expansion of Pre-K led to worse overcrowding at 352 elementary schools, with about 236,000 students. At 76 schools it pushed the school to 100% utilization or more. The expansion of 3-K will likely make the overcrowding even worse. Daily News coverage here; full report here.  Press release below.  Moreover, of the 57,000 school seats in the new proposed five-year capital plan for 2020-2024, 50,000 seats will not be built until 2024 or later -- long after the Mayor has left office.

School overcrowding in NYC has been worsened by the expansion of pre-K and 3-K classes, as detailed in a new report, “The Impact of PreK on School Overcrowding: Lack of Planning, Lack of Space.” 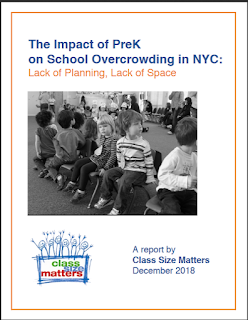 About 575,000 students, more than half of all students, attended schools that were at or above 100 percent capacity in 2016-2017, according to data from the NYC Department of Education.  In recent years, overcrowding has worsened significantly, especially at the elementary school level. Nearly 60 percent of elementary schools are at 100 percent or more and 67 percent of elementary grade students attend these schools. This is due in part to the fact that enrollment in these grades has increased faster than new school construction.
The report’s analysis finds that 14,220, or more than half of the pre-K students enrolled in public elementary schools in 2016-2017, were placed in 352 schools that were at 100% utilization or more, thus contributing to worse overcrowding at these schools for about 236,000 students.
In about one quarter (22 percent) of these schools, the expansion of pre-K actually pushed the school to 100 percent or more.  As of 2016-2017, 76 elementary schools, with a total of 45,124 students, became overutilized, according to the DOE’s data, because of the additional number of pre-K students at their schools.
In addition, thirty schools with pre-K classes had waitlists for Kindergarten, necessitating that these children to be sent to schools outside their zone and sometimes far from home.
District 20 in southwestern Brooklyn is the most overcrowded district in New York City with a critical shortage of elementary school seats.  The average utilization of elementary schools is 130 percent.  Yet the DOE continued to place pre-K classes in already overcrowded District 20 schools, despite the presence of an under-enrolled pre-K center nearby.
Laurie Windsor, the former President of the Community Education Council in District 20 said: “It is appalling how the DOE insists on keeping pre-K classes in elementary schools when there is such severe overcrowding and families are forced to travel for Kindergarten, sometimes quite far away, without available public transportation. Especially egregious is that there are pre-K centers nearby which could absorb these classes easily. This practice has put unnecessary hardships on families and is insensitive to the needs of the community.”
The DOE began to implement 3-K in 18 schools in two districts last year, and three of these schools were already overcrowded in the prior year. Additionally, of the 61 additional schools which added 3-K during the current school year, more than one fourth were already overcrowded. Several of these were also Renewal schools, meaning they were struggling with low performance and in danger of being closed.
The new five-year capital plan will not sufficiently address the worsening overcrowding. Although the Department of Education claims that new plan includes “funding for 57,000 seats over the next five years,” 50,000 of these seats won’t be completed until 2024 or later, when the Mayor has long left office.
To make things worse, the NYC Department of Education has failed for many years to update its methodology to project the need for new school capacity.  The formula used for estimating enrollment, called the Projected Public School Ratio, has been based on census data over twenty years old. and has not accounted for the expansion of thousands of new pre-K students placed in the schools. Though the formula was updated this fall, it remains uncertain whether it fully accounts for additional pre-K students and it does not anticipate the mayor’s plan to expand 3K.
Cramming more pre-K students into public schools worsens school overcrowding, which in turn can contribute to larger classes, and/or sacrifice the space necessary for a well-rounded curriculum.  If this occurs, then the educational benefits of the program will be undermined.
A recent large-scale experimental study in Tennessee found that pre-K was no silver bullet, and failed to produce gains in achievement. The chief investigators of the study emphasized that the lack of positive results underscored how the quality of the entire early childhood educational experience through 3rd grade must be addressed if improvements in student learning are to be achieved.
Leonie Haimson, Executive Director of Class Size Matters, said: “The DOE must stop its practice of making overcrowding worse in our already overutilized elementary schools by jamming more pre-K and 3-K classes in these schools, or else the education of students in other grades will be seriously impaired and the eventual benefits of expanded pre-K undermined.”
She added: “The Mayor needs to increase the number of seats in the capital plan and build them in a more efficient, accelerated manner, or else his legacy will be seriously marred by even more extreme overcrowding and educational neglect.”

The report, “The Impact of PreK on School Overcrowding in NYC: Lack of Planning, Lack of Space” is at: https://www.classsizematters.org/wp-content/uploads/2018/12/PreK-report-12.17.18-final-final.pdf