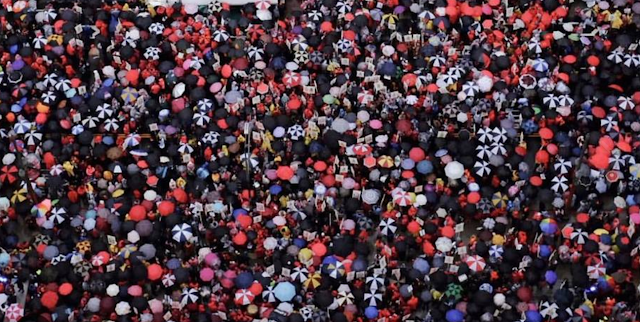 Last week I published a column on the Washington Post Answer Sheet about how class size is the central issue in the Los Angeles teacher strike, now going on for a week.

Los Angeles schools have a $1.8 billion surplus, and yet Superintendent Austin Beutner still insists that he can ignore any and all class size caps in the teacher contract, because of a loophole that was inserted in the contract after the great recession hit, a decade ago.

Ignoring these contractual caps - which are still too high -- means that class sizes in Los Angeles can rise to 35 or 40 in many schools, which are ridiculously large and far too large to provide any student with  sufficient feedback from their teachers.

In the piece, I also explained how many insiders suspect that the real reason the pro-charter LA school board and  Superintendent so obdurately refuse to lower class size is that this would take up space in their schools that instead they'd prefer to give to the expanding charter schools.

I also dispute the risible claims made in an oped by Arne Duncan, in which he tossed in the red herring of unreliable average class size data as cited by the district, rather than admit that the real focus of discontent among parents and teachers are the maximum class sizes that many LA students suffer.  Duncan also went on to repeat the tired straw man argument that parents would prefer their children have a good teacher than a small class- as though that's a real world choice any parent should have to make.

Class sizes have increased across the country since the recession, and even though we're a decade past that point, school budgets haven't fully recovered.  I'm encouraged that in Los Angeles as well as many of the other states where teachers led strikes and walk-outs last year, including Oklahoma,  Colorado,  and Arizona,  this has led to a resurgence in people's awareness of the key issue of class size, because its a too often-ignored component of any real school improvement strategy. 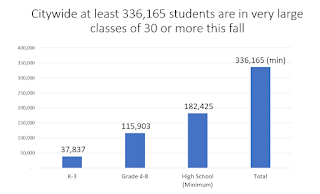 Despite all the more trendy proposals will concerning online learning, community schools or pre-K expansion, class sizes in grades K-12 are far too large in most public schools around the country to provide kids with a real opportunity too learn.  As Dale Farran, one of the lead investigators in the Vanderbilt preK study -- the most authoritative large-scale experiment ever done on expanding preK, has concluded:

“Too much has been promised from one year of preschool intervention without the attention needed to the quality of experiences children have and what happens to them in K-12.”
Here in NYC, class sizes also remain far bigger than they were when the state's highest court  said they were too large to offer students their constitutional right to a sound basic education in the decision in the CFE case.

The union class size caps in NYC public schools are also are far too large, and haven't been lowered in over fifty years - despite all the research showing how critical this issue is for student success, especially for disadvantaged students and students of color.  And this is despite the fact that 99% of NYC teachers say reducing class size would improve our schools - far outstripping any other reform. 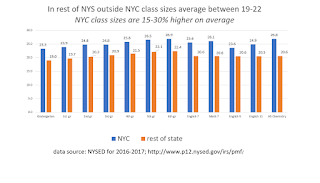 Over 336,000 NYC students are crammed into class sizes of 30 or more, and our average class sizes are 15-30% higher than those in the rest of the state.    For more of the latest class size data this fall, including sharp increases since 2007, check out our powerpoint here.

Time to do something about this here in NYC?  Leave your comments below.

But first, check out the video below of Diane Ravitch speech at a UTLA rally at Alexander Hamilton High School in Los Angeles on Wednesday, saying the best thing that could come out of the LA strike is a real cap on class size and a real cap on charter schools.

There are two things you need in order to get better at anything. First is you have to do it a lot. Second is that you need feedback from someone who has expertise associated with what you are trying to learn. I think this is the main argument for lower class sizes for me. I will take issue with the graph you used. Any graph the doesn't set the lower end of the Y axis at zero is exaggerating the differences between the variables in the graph. For example, the kindergarten bars show a difference of about 22% if you look at the numbers. If you look at the bars the difference appears to be over 50%. I know you didn't do the graph, but this is something you need to be on the lookout for. What I don't get is how a state run by democrats spends about half as much on schools and New York. Also, with classes over 30 about all the teacher can do is stand and deliver. With so many students packed in a room, you also have less flexibility for arranging students and furniture. Thanks for this effort and keep up the good work. Douglas W. Green, EdD, Twitter: @DrDougGreen, blog: https://DrDougGreen.Com, Book: "Teaching Isn't Rocket Science, It's Way More Complex". http://amzn.to/2zfOTbL Here's an executive summary http://bit.ly/2FdK337.

Absolutely right. Class size counts the most in any project to improve student achievement. Large classes are an obstacle to the teacherly attention all children need to learn, especially those kids who are ELL. Leonie has been the hero at war with the status quo to force attention on the large classes in mass education. About time that the teacher union leaders listened to her and organized their members to fight for what counts the most, small classes.

I changed the graph above with NY state vs city class sizes to make the Y axis end at zero; thanks for the suggestion Doug Green.