There's been a tremendous amount of rhetoric from both sides and from the media about the recommendations in the second report from the School Diversity Advisory Group (SDAG), focusing primarily on its proposal to eliminate gifted programs in elementary schools.

See for example the hyperbolic headline of NY Times article saying these changes would create "seismic changes" and a tweet from the reporter, Eliza Shapiro, that it would "blow up the system." A headline in the NY Post claims, even more hysterically, that "De Blasio is out to destroy public schools."

The reality is that only about four percent of NYC public elementary grade children are attending gifted classes right now, and in many districts there are practically none.

See the chart below - showing there are only two districts, District 2 and 26, in which the share of elementary grade students in gifted classes are above ten percent.  (We took out the citywide gifted programs for this district analysis -of which there are five: NEST, Anderson, TAG, BK School of Inquiry and Q300, the 30th Ave. School.) 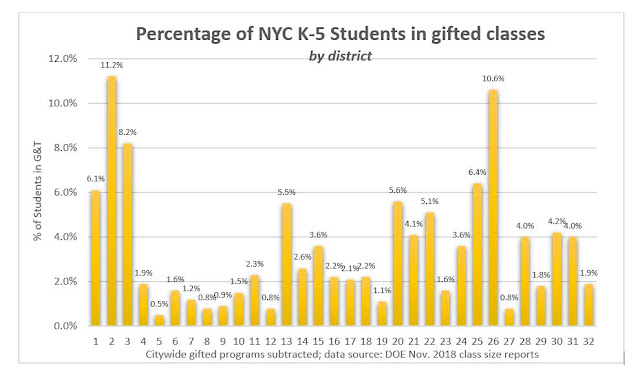 It is true that the parents of these kids are an extremely vocal constituency - with political influence far beyond their numbers.  Yet to eliminate these classes would hardly represent a seismic change by any rational estimate -- for good or for ill.

This is not to reject the compelling points made by the adherents to eliminating these programs.  There is  no research to support the validity or accuracy of using high-stakes tests to assess kids as young as four years old for "giftedness," as in the current system;  and some parents do indeed enroll their children in expensive test prep programs to game the exam.

It is also true that many studies show that separating out students by ability -- "tracking them" - does little to improve overall achievement, even for the highest scoring kids; and instead tends to depress learning among those struggling the most.

Yet reaching students with a wide range of abilities can also be exceedingly difficult for teachers, especially given the large class sizes in most NYC public schools.  As Shino Tanikawa, a member of the SDAG and I pointed out in a Daily News oped, if you are going to integrate classrooms, lowering class size is even more critical.  Indeed, increasing diversity and class size reduction should go hand in hand.

When the government in Finland wanted to stop tracking in the elementary grades, the national teacher union came back to them and said, we will consent but only if you lower class size at the same time.  The same process then occurred in the middle and upper grades.  As a result, Finnish students have uniformly small classes across the country, do not separate out students by ability or achievement, and surpass most every other country in international comparisons.

Similar results could be accomplished in our public schools if NYC decision-makers, including the Mayor and Chancellor, wanted to do right by our children.  Reducing class size would likely have a far greater effect on narrowing the achievement gap -- that is, if they wanted to enhance diversity, keep middle class parents in the system, and provide real equity to disadvantaged students at the same time.