Early voting sites in 33 NYC public schools. But why? 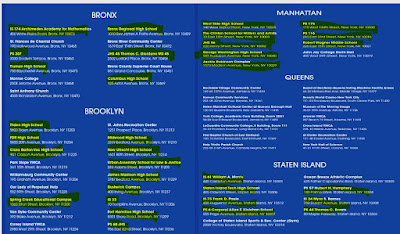 Early voting will begin statewide on Saturday, October 26th and continue for 11 days.  Meanwhile, 33 NYC public schools have been chosen as early voting sites out of 61 across the city, though their principals were only informed of this fact on October 5, according to the reporting of Brigid Bergin of  Gothamist/WNYC. Here and above is the list of the NYC sites by borough.

In the 33 public schools where early voting will occur, this will deprive many thousands of students of  their ability to have their scheduled phys ed classes in their gyms and/or eat lunch in their cafeterias.   It will also poses real security risks to students, with hundreds of voters gaining access to school buildings and possibly roaming school hallways during the school day.

One principal was quoted in the Gothamist article as saying, “I can’t not have kids [in the gym] for a week in October. That’s crazy."

At the same time, there is not a single public school that will be used as an early voting site in the borough of Queens, as the city instead wisely located them instead in Board of Election headquarters, YMCAs, community centers, churches, colleges, museums, and even the Resort World Casino in Ozone Park.

Why NYC had to put so many of their early voting sites in public schools is hard to fathom, when so many other, more appropriate options were available.

Assemblymember Michael Reilly of Staten Island sent a letter to Mayor Bill de Blasio and the Board of Elections last May, expressing his concern over the use of public school facilities for early voting after the preliminary list of sites was announced on April 30.

At that time, only nine of the 38 early voting sites selected were public schools, including five in Brooklyn, three in Manhattan, and only one in Staten Island -- although three parochial schools in the  borough were identified at that time, later to be eliminated.

In his letter, AM Reilly, who before his election to the Legislature was a member of Community Education Council 31, pointed out how early voting would be seriously disruptive to these schools:

“At most schools, voting machines are being placed in cafeterias, gymnasiums, and even the building’s main lobby. It impedes a student’s ability to navigate their school safely, and sometimes causes them to miss valuable academic time,” said Reilly. He continued, “Before early voting, schools were disrupted for just a maximum of three or four days each election year, but now we are inconveniencing students, teachers, and administrators for a minimum of 24 days to accommodate a 12-day primary election, and a 12-day general election, not to mention an additional 12-days for any special election. It’s ridiculous, plain and simple.”

According to AM Reilly's twitter feed, his letter got no response, and instead of addressing this situation with the seriousness it deserved, the city added twenty-four more public schools to the list  this fall. On October 8, AM Reilly wrote the Mayor again, reaffirming his concerns.

Let's hope this unacceptable situation gets fixed before the the primaries and general election next year.
Posted by Leonie Haimson at 10/14/2019 03:03:00 PM