Achieve Inc. seriously misleads the Board of Regents on graduation exit exams

Update 12/11/19: Michael Petrilli responds that Fordham does not oppose the use of exit exams, and claims that the term can be used for exams that either contribute to HS grades or are required to pass to graduate from high school. I pointed out that Wikipedia, Chalkbeat and NCES all clearly say that an exit exam is defined as solely the latter.  I did strike out the statement below that Fordham opposes the use of exit exams.

Thanks for Stan Karp of the Education Law Center for much of the data here.

Achieve Inc. has been commissioned by the Board of Regents to research what other states are doing with their graduation exit exams, and review the current New York high school graduation requirements which mandate that students have to pass five high-stakes exit exams to graduate from high school. They are now engaged in an "information gathering phase" that is being being funded with an $100,000 grant from the Gates Foundation.

Accordingly, the organization gave a presentation to the Regents today,  entitled "Graduation requirements review," which included the following statements: that "states are making adjustments to their assessments required for high school graduation" followed by this claim: "28 states administer an ELA, mathematics, science and/or social studies exam(s) that factors into students' grades or graduation requirements."

Missing from their presentation are the following facts: 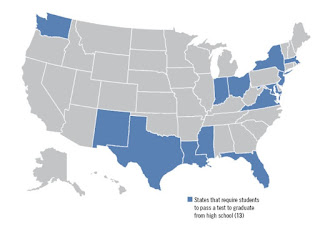 FairTest reports that currently, only 11 states currently have high school graduation exit exams, down from high of 27.

For the year 2018-2019, Education Week wrote this:  "Thirteen states require students to pass a test to get a high school diploma,...Exit exams used to be more popular: In 2002, more than half the states required them.”

Yet their list included Washington which recently approved an end to exit tests for the class of 2020.

The Fordham Institute put out a report over the summer, with the following information:  "just 12 states will require students in the class of 2020 to pass exit exams, falling from a peak of 30 states requiring them for the class of 2003." 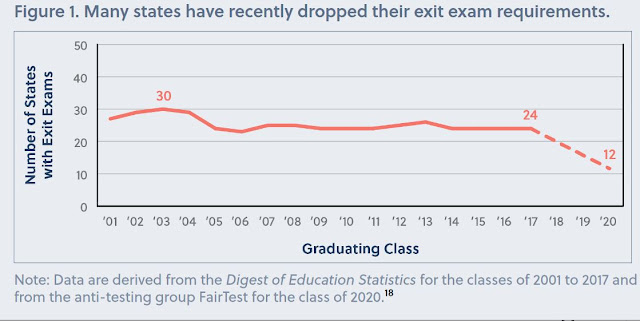 When challenged on Twitter about the disparity in their figures compared to other sources, Achieve responded that they "define them [exit exams] as assessments that matter for students - impacting course grades or graduation."  Yet to conflate states that require students to pass a test to graduate from high school with those that assign ordinary end of course exams is extremely misleading.

What else was missing from the Achieve presentation?

The overwhelming evidence against the use of exit exams, which has caused conservative organizations such as the Fordham Institute, as well as middle-of- the-road organizations like New America, to join with more progressive organizations, like FairTest and the Education Law Center, to oppose them.

"In short, typical students do not appear to be any better off after the exit exam policy, and those that were already vulnerable, including low-income and minority students, often became more so. In one of the broadest findings, a blue ribbon commission formed by the National Research Council, the Committee on Incentives and Test-Based Accountability, found that high school exit exams nationwide had not increased student achievement, but rather decreased graduation rates by two percentage points, on average.  Along similar lines, a 2010 meta-analysis on the effects of high school exit exams, including minimum competency versions and newer, more rigorous tests, found that, in general, the “evidence indicates that exit tests have produced few of the expected benefits for students overall and nearly all of the expected costs for disadvantaged and at-risk students.”

Since the 2010 meta-analysis, new evidence has reinforced the conclusion that exit exams disproportionately affect a subset of students, without producing positive outcomes for most. A 2013 study from Olesya Baker and Kevin Lang found that more rigorous exit tests, not MCEs [minimum competency exams] , were associated with lower graduation rates, particularly in states that had not previously had a MCE policy in place. Further, the lower graduation rates were not fully offset by increased GED attainment. As with other studies, Baker and Lang found that there was no relationship between exit exam policies and labor market outcomes. They also examined incarceration rates as another long-term cost of exit exam policies. They found that both MCEs and more difficult HSEEs increased the likelihood of incarceration, but the findings were only significant for the more rigorous tests. In fact, these kinds of exit exams were associated with a 12.5 percent increase in incarceration rates.

Perhaps it's not surprising that Achieve, the organization that help bring us the seriously flawed Common Core standards, would provide such an incomplete picture in the research consensus against the use of such exams, as well as the growing trend among states to reject them.

Sadly, Achieve is now produce a formal report which will synthesize the research on graduation exit exams for the Regents, as well as summarize feedback from state stakeholder groups about their views of these exams.  From this presentation, one cannot assume they will fulfill either of these tasks in a reliable fashion.
Posted by Leonie Haimson at 12/09/2019 07:31:00 PM