Principals vote "no confidence" in Mayor; ability of DOE to provide an adequate education to NYC kids more in doubt than ever 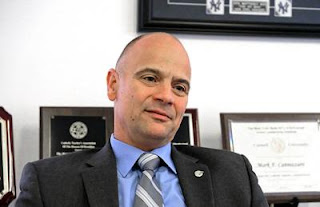 Mark Cannizzaro, President of the CSA, the administrator's union, just announced that they had unanimously approved a resolution this morning, saying they had lost trust in the Mayor, and calling him to cede control over NYC schools and let the NY State Education Department take over.

It is clear from the CSA resolution, press release and subsequent press conference that the frustration of principals has reached a boiling point, given all the repeated last minute changes in DOE's reopening plans and how they were not  included in any of the discussions that has made their attempt to staff their schools even more difficult that it was already, with three different teachers required for in-person learning, remote blended learning, and 100% remote learning.

The lengthy resolution says, among other things,  that DOE had "entered into grossly irresponsible staffing agreements that fail to prioritize needs of school children and families" & district superintendents have pressured principals "to falsely report their staffing needs already met."

The straw that broke the camel's back, according to President Mark Cannizzaro at a press conference this afternoon, was the latest DOE MOU with the UFT, released on Friday, that will allow teachers to stay home if they are teaching remotely,  which he said makes the orderly staffing of schools even more difficult.  He also cited a DOE email that went out to administrators, saying that they would have teach classes, even though the Chancellor had earlier agreed that this would be a voluntary decision on their part.

FACE (DoE's office of Family and Community Empowerment) also emailed parents late on Friday, linking to the new UFT agreement and highlighting the new role of paraprofessional classroom manager within it, described this way:

This new job description implies that the DOE and UFT are now moving towards a plan where teachers will be able to stream classes from their homes, including to blended learning students who have opted into attending school.  Instead of being taught by a teacher in their classrooms, they may instead be getting their instruction on a computer, while being overseen in-person by a paraprofessional.


Also in the email, FACE provided parents a list of “free or low-cost” internet providers, implying that DOE no longer intends to be responsible for providing free internet to all students who need it.  Moreover the supposedly “ free providers” the email linked to  only offer access for free for 60 days and only for subscribers without a current subscription, which would leave most families out.

FACE also recommended the use of internet at the following places:

The email linked to a New York Public Library website, which only lists the main library and offers  no information about internet access.  Here is more useful webpag, which makes it clear that all the NYPL branches in Manhattan and Bronx are still closed except for grab and go books, adding this:

“…there will be no computer use inside open branches.  The Library has left the Wi-Fi on at all its libraries, and patrons can use it outside the branch.”

That particular NYPL website also offers links to the websites of the Brooklyn and Queens public libraries.  The BPL homepage is confusing and tells  nothing about access, but another click gets  you to a page that says their libraries still open only allow “lobby services” – again meaning grab and go books.

The Queens Public Library homepage is even more confusing,  but a click takes you to its “blog” which reveals that any branch that is open only allows “to-go service”.

You have to find this article from The City to learn that 20 Queens branches have outdoor WiFI extenders (though it doesn’t say which ones) and that many Brooklyn branch libraries also offer internet access outside.

The City article  cites a NYC Comptroller’s report,  ”which  found that 44% of New Yorkers in poverty lack broadband access at home, compared to 22% living above the poverty line.”  Apparently there was a public library program which lent hot spots to certain families with kids in the public schools over the summer, but it doesn't seem to be going anymore.

All these issues are further complicated by the fact that parents without internet service wouldn’t receive this FACE email anyway.

So it seems that now children opting into blended learning may not receive any real in-person instruction from their teachers, even when they’re in school.  When they’re home, they along with 100% remote students may not be guaranteed access to instruction via the internet, unless they sit near Link NYC kiosks, outside certain public libraries, or in a plaza in Lower Manhattan.

Not to mention their online class sizes will be allowed to balloon to as many as 68 students or more.

At the press conference today, Mark Cannizzaro was asked what help he expected or wanted from the NY State Education Department.  He responded, rather plaintively, it would be helpful for fresh eyes to take a look and figure out how a better education might be provided to NYC kids.  That's certainly true.

Whether NYSED or any other agency or institution will actually help in this process or even mediate to ensure that the Mayor works more effectively with school leaders is very uncertain at this point.  An article in today's WSJ recounts how the Mayor consistently ignored the suggestions of community leaders and even the members of his own School Reopening Task force  throughout the spring and summer months.

All one can say is that the Mayor and Chancellor had six months to come up with a better plan, and completely botched it, to the tragic detriment of NYC kids.