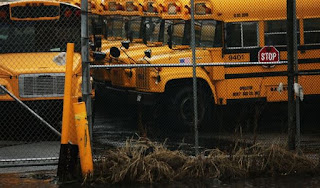 As Sue Edelman reports in today's NY Post, last week the PEP approved the extension of contracts with busing companies through 2025 that will guarantee them 43% of the full amount -- amounting to more than $500 million per year ---whether buses are running or not.

The  DOE also agreed to pay $106 million for May and June when buses were unused, which they say is 40% of the regular cost of busing for those two months.  This is less than the 85% that they originally planned to pay before we sounded the alarm last April about these contracts, at a savings of more than $100 million, but is still far more than they had to hand over.

These contracts, like many others, contained a force majeure clause, which would allow all payments to be stopped in case of a pandemic, as a letter last spring from the NYC Comptroller pointed out. The NY Post article doesn't reveal what the DOE paid for the six weeks in March and April when the schools were also closed and buses weren't running, but one can assume DOE paid these companies the full contracted amount of more than $130 million per month during this period.

As I am quoted in today's article, the decision of the DOE to guarantee these payments, starting this year through 2025, seems extremely imprudent, especially given the huge dip in revenue the city is experience which may lead to even more budget cuts to our schools and their staffing:

"Without more transparency about the rationale for these controversial contracts, it is impossible to know why the DOE is willing to sacrifice up to half a billion dollars per year in taxpayer money to busing companies through 2025, whether their buses are running or not,” Haimson said. “This seems highly irresponsible, especially given the fiscal crisis NYC is facing, which could lead to years of damaging budget cuts to our schools.“

Already today, the Mayor announced that in nine zip codes in Brooklyn and Queens, 100 public schools and 200 non-public schools (for which we also pay for busing) will be closed for at least the next two weeks.  More schools very well may close in the coming weeks, and yet the city will have to pay a minimum of more than a half a billion this year to the bus companies whether they are transporting students or not.

Last spring, when we alerted reporters to the fact that the PEP was about to vote on renewing contracts with these companies which called for full payment even after the school buildings had been closed, the DOE pulled the contracts from the PEP meeting and restarted negotiations.  Then the bus companies started promulgating scare stories, warning if payments halted, neither the buses or their drivers would be ready to restart this fall.  One should note that doesn't appear to have happened.  The bus unions also warned of extreme economic damage to the drivers, but instead they went on unemployment, which at $600 per week through July may have surpassed their usual wages.

Other wasteful contracts if less expensive were approved by the PEP last week.  One of them involves more than $800,000 in payments to Questar, the company which administers the state exams, for ELA and Math scoring guides for the years 2019-2020 as below. 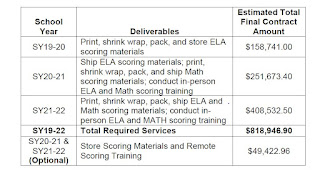 What's wrong with this contract, aside from its excessive amount (couldn't these materials be provided online rather than printed and shipped ) and the way that it was authorized months after the period when it supposed to begin?

No scoring or testing was done last year, because these exams were cancelled during the pandemic.  The DOE document says that "Questar had printed about 65,000 Scoring Guides for the  ELA  exams  scheduled  for  March  2020" whose cost DOE now apparently intends to pay for and use in 2021.

If the exams aren't given in 2021, the document explains:

Additionally, the requested term is for three years in case the upcoming state exam is suspended in spring 2021 until spring 2022; in this scenario, the three-year term allows the vendor to store and reuse the printed ELA scoring guides, saving additional costs, for the spring 2022 administration.

However, what the DOE doesn't mention here is that if exams are given in the spring of 2022 they may well be developed and administered by an entirely different company, as the state's contract with Questar lapses this year.

In fact, the NY State Education Department has issued a new RFP, with bids due Nov. 24, for a new vendor to produce the state exams starting in 2021-22.

There have been repeated problems with Questar's administration of these exams, including a student data breach in 2017, and computer crashes in many districts in 2018 and 2019.  In 2019, so many students were unable to upload their responses that the state cancelled the second day of computerized ELA testing.  As a result, Bob Lowry, president of the New York State Council of New York Superintendents, said they had serious doubts that Questar would ever properly do its job:

“We urge the State Education Department to immediately reevaluate its contractual relationship with Questar Assessment and undertake an aggressive review of the errors which have occurred during administration of this year’s assessments so that our students are never again subjected to such unacceptable experiences.”

So why did DOE signing contracts for nearly a million dollars with Questar through 2022 for scoring guides for exams that may never occur? It is inexplicable.