Patrick Sullivan on the DOE's acquisition of Reliant bus company: Why the PEP should vote no. 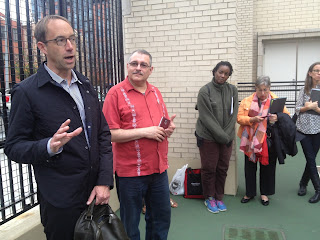 Update: The Panel for Educational Policy approved the contract 8-5, with only the borough appointees and Tom Shepherd, the appointee chosen by parent leaders, abstaining.

Patrick Sullivan, a former member of the Panel for Educational Policy, sent this email to current PEP members in opposition to the DOE contract with a shell non-profit, run by DOE, that would acquire the bankrupt Reliant bus company.  For more on this issue, see Sue Edelman's article yesterday  in the New York Post and the editorial today.  The PEP is voting on this contract tonight.  Livestream here.

I am writing to express my concerns about the contract with the new NYCSBUS entity for school bus services.  I ask you to abstain or vote against the contract.

The contract is part of a two-pronged program to create a DOE-controlled busing company.  One component is the new non-profit intended to buy Reliant from its parent MV Transport.   The non-profit has a board controlled by the Chancellor and his appointees.   The non-profit will get Reliant's assets including buses owned outright and leases for both buses and bus depots.   The non-profit will also be responsible for Reliant's pension obligations.  The pension is a private one for the union's members and funded by all the bus company employers.  Like most pensions, it's underfunded.  The responsibility to make up any underfunding is with the employers.   When NYCSBUS buys Reliant, it becomes responsible for the pension.  Their share of the underfunding is about $140 million.

I do not believe the DOE has been either comprehensive or candid in explaining the risks involved in their plans:

NYCSBUS fails to deliver services - the company only exists on paper right now so a number of scenarios could derail operations including inability to staff management, labor strife, equipment failures or pandemic restrictions.  Whether the buses run or not, NYCSBUS is obligated to ensure pension benefits to employees enrolled in the plan.  If NYCSBUS stopped operating entirely, the DOE would inherit its obligations to the pension members.

The Multiemployer Pension Plan Amendments Act of 1980 (“MPPAA”) amended ERISA to address employers leaving these plans by creating withdrawal liability, which requires an employer to pay its share of any unfunded vested benefits when the employer leaves the plan. If an employer cannot pay its withdrawal liability, for example because it is bankrupt, those liabilities are shifted to the remaining employers, which created the “last man-standing rule.” (https://www.uschamber.com/comment/comments-proposed-multiemployer-pension-recapitalization-and-reform-plan)

A series of bankruptcies could result in the bulk of the pension obligations landing on the DOE.  Meeting them would deplete classroom funding.

Underfunding of pension increases : interest rates are at record lows.  The gap between assets and payments to pensioners could grow dramatically leaving the DOE obligated to siphon operating funds for increased pension payments.

DOE and City Hall staff are asserting that the NYCSBUS non-profit is a separate entity from the DOE.  Technically that's true.  But that does not mean the DOE would escape responsibility for the  pension obligations of the non-profit.   Because the Chancellor controls its board of directors, any sort of regulatory or judicial ruling would likely find the DOE ultimately accountable financially for NYCSBUS.

The 5.5 year $900M contract you are asked to approve would allow Reliant's owner to walk away from all these risks and transfer them onto the DOE without appropriate compensation.   Rejecting the contract would likely scuttle the sale of Reliant and open up better alternatives.  One would be to create a new bus company that hired a management team, staff to operate and leased its own buses.  The new company could scale up as it demonstrated success.  While the new company would still share obligations to keep the pension solvent, the magnitude of the risk would be dramatically lower and, most important, the deep pockets of MV Transport and its wealthy owners would continue to back the pension through the coming period of uncertain state and city budgets.