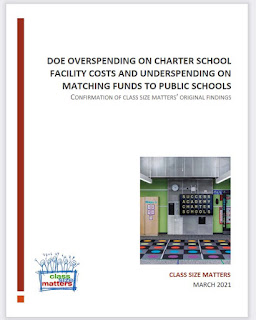 A new Class Size Matters report,  DoE Overspending On Charter School Facility Costs and Underspending On Matching Funds To Public Schools revealed that the NYC Department of Education has overspent by many millions on rent for charter schools, while denying co-located public schools  millions of dollars of their legally-required matching funds for facility upgrades and repairs.


This report was an update from our earlier 2019 report,  which found many of the same problems after analyzing DOE spending data that we had acquired through Freedom of Information Law requests and spreadsheets posted on the City Council website.

As a result of this earlier report, the NYC Comptroller’s office sent a letter to the Chancellor in January 2020,  asking him to respond to our findings.  When Deputy Chancellor Karin Goldmark replied several months later, she surprisingly did not refute any of our conclusions and actually confirmed some of our findings.  She also sent a new spreadsheet which purported to show DOE’s matching funds that contained data completely different from the data provided us earlier by DOE via FOIL and/or from the City Council website.

Yet the data in the new spreadsheets still revealed considerable shortfalls in matching funds nearly as egregious as we found in our original report.  The state passed a law in 2010, requiring that any spending undertaken by co-located charter schools to enhance their spaces be also offered to public schools that shared their buildings, in recognition that too often, public school students were subjected to separate but unequal conditions inside the same building. Nevertheless, we found that only four public schools out of 812 instances over six years had received funds equal to the amount spent by their co-located charter schools on facility upgrades, and not a single public school received the cumulative amount owed to them from FY 2014 to FY 2019.

Instead, 127 co-located public schools were owed a total of $15.5 million over this six-year period.  A searchable database of schools that lacked matching funds is posted here.

Two of the five schools that were the most shortchanged were District 75 schools for seriously disabled children, despite the fact that staff and parents at these public schools reported considerable needs for upgrades and repair.  One of those D75 schools is the Mickey Mantle school in East Harlem that shares space with Success Academy Harlem 3 and lacked over $1.5 million in matching funds over six years.  According to the school’s  Building Condition Assessment Survey, as of last summer, the school had windows without gates, emergency exit doors without alarms, and a non-operational emergency lighting and sound system.

Air conditioning is especially important in D75 schools, as their schools are open all summer and many of their students have complex health issues that are exacerbated by the heat.  However Allister Johnson, a teacher and the UFT chapter leader at the Mickey Mantle school, told us that their air conditioners break down continually: “We cannot use the classrooms for summer school. We have fragile kids with breathing problems. It would be dangerous for them to be in classrooms where all the air conditioners are not working properly.” He added that the staff bathroom has leaked for at least six years which floods the floors of the stalls, and that the children’s bathroom lacks hot water on a regular basis.

Another school that lacked nearly a million dollars in renovation funds is Mosaic Preparatory Academy in the same building.  A parent and PTA officer at the school, Shaheem Lewis, reported that for years, the school had asked the School Construction Authority to fix the seats in the auditorium that were falling apart and to repair the floors of the stage and the gym that had become dangerously worn.

In response to a Daily News article on our findings, the DOE officials claimed that “some of the matching money may not arrive at public schools concurrently with the charter schools’ spending, and thus would not have been reflected in the spending reports analyzed by Class Size Matters.”

Yet this statement ignores that the 2010 state law requires that the matching funds be provided to the public school within three months of the charter school’s expenditures, and our report found millions of dollars missing in cumulative matching funds over a period of six years.

According to the DOE spreadsheets, officials claimed several reasons for not matching these funds,  including that these funds were not necessary if the charter school expenditures were made on air-conditioners, repainting and/or reflooring projects.  DOE repeated this claim to WCBS-TV, which aired a segment on our report, focused on the lack of payments to Mosaic Prep:

“…data shows from 2014 to 2019, Success Academy Harlem East received about $929,000 in renovation funding not matched by the Department of Education…the DOE says $913,000 of those expenditures, including the cost of new AC units, are exempt.”

Yet as our report pointed out, charter school spending on air conditioners as well as repainting and reflooring are specifically cited   Chancellors regulations A-190  as triggering matching funds.

In 2014, another change was made to state law requiring that charter schools be given space within NYC public school buildings or that DOE help pay for their rent in private spaces.  Yet even given the mandate in this law, we found that that the DOE has been overspending on charter school rental payments by millions of dollars over many years.

According to our analysis, in FY 2019, the DOE overspent by $21 million on lease subsidies for 39 charter schools by paying them more than their base rents.  We also found that DOE has been leasing eight buildings directly for charter schools, rather than asking them to rent the buildings themselves, and thus has made itself ineligible to receive an estimated $8 million in state reimbursement in FY 2020 alone.

The DOE payments for charter school lease subsidies also increased sharply by 41% from FY 2019 to FY 2020.  In many cases, this was triggered by ballooning charter school rent that needs further explanation. For example, the rent skyrocketed at all three sites that housed Hebrew Language Academy Charter Schools: at the school in Manhattan, the rent increased from approximately $148,000 to $2.9 million in one year; while more than doubling at one site in in Brooklyn from  $931,000 to $2.5 million and increasing by more than 13 times at another Brooklyn site from just over $80,000 to $1.06 million.

DOE has also been paying rental subsidies for eight charter schools whose Charter Management Organization or affiliated organization owns their own space, at a cost of $11.6 million in FY 2020.  In some of these cases, the rents of these charter schools also grew dramatically, raising questions about whether these rents were fairly assessed or were hiked for the purpose of self-dealing.

In one  especially startling example, we found that the rent for the two Success Academy charter schools housed at Hudson Yards increased from approximately $793,000 to over $3.4 million – more than quadrupling – despite the fact that the space is owned by the Success Charter Management Organization. (The picture of that facility is above, from the cover of the report.) This increase in rent allowed Success to charge the DOE over $3 million in rental subsidies for those two schools alone in FY 2020.

To address these concerns, we’re proposing that DOE regularly post online all funds spent by co-located charter on facility upgrades within three months of these expenditures, and the data provided to principals and :School Leadership Teams at the public schools that share their buildings.  These reports should include any matching funds DOE has provided to the public schools or intends to provide in the future, along with the time frame. If the DOE determines that any of these charter expenses are exempted from triggering matching funds, the reasons for this exemption should be clearly described, along with a citation from the law or the regulations that allow for the exclusion.

The City Comptroller’s office should also audit all DOE spending on matching funds and if our findings of shortfalls are confirmed, demand that the DOE contribute the full amounts to the co-located public schools that have been denied their proper share of funds for renovation and upgrades over the last six years.

The City Comptroller should also analyze whether the DOE actually did overspend on rental assistance to charter schools by $21 million in 2019, as the spreadsheets indicate.  If so, the DOE should demand that these charter schools reimburse those funds in future years or subtract the amounts from future payments. The Comptroller should also annually analyze whether the rents charged to charter schools are fairly assessed, especially those whose buildings are owned by their CMOs or other allied organizations, to ensure that these schools and their landlords are not gouging the city by charging more than they would otherwise.

Finally, the Legislature should eliminate any obligation on the part of the city to require that charter schools be given space in public schools or provide rental assistance. The NYC Department of Education is the only district in the state and indeed in the nation required to help pay rent to charter schools, and it is simply unfair to burden them with this mandate. especially given the poor record of many charter schools in enrolling and retaining high needs students. In FY 2020, this legal mandate cost taxpayers nearly $108 million, an amount that the Office of Management has projected will increase to $160 million by FY 2022, as charter schools continue to expand in enrollment and the per-student subsidy for rent rises over time.