A well-connected informant speaks out about the MAP exams 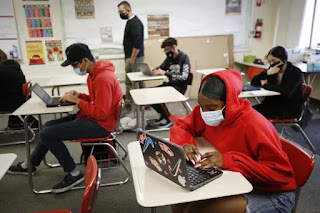 Teachers are speaking out on social media and elsewhere about the inordinate amount of time spent testing kids this month, using either iReady or MAP, whose uselessness I previously wrote about here. A former DOE administrator emailed me to say that despite their claims, the DoE did not allow a single high school to use a different screener than MAP exam.  This person also described how the results of these inherently unreliable exams will be misused.  Though my informant said that students are not allowed to opt out, we have heard from some parents that their principals are indeed honoring such requests this, so I urge you to go to NYC Opt out’s website for a sample letter/form to send to your school.   The message I received follows:

When principals were commanded to "select" a screener at the end of July (when probably 75-90% were on vacation), there was a "superintendent approved alternative" option.  I know that more than forty high schools selected that option.  Probably many, many more.  None were approved …  High schools had only one option, btw, except for kids with IEPs and ELLs.  Everyone else gets the MAP….

We learned from a DoE employee that there have been weekly meetings with Academic Policy, which is focusing on “academic recovery and interventions” using the results of the screeners.  The MAP data is being jointly managed by NWEA (which publishes MAP) and the DoE, which has also built a data system for its own use - superintendents (and everyone above) can use the system to compare schools within and across districts.

[First Deputy Chancellor] Donald Conyers informed all superintendents that parents are not allowed to opt their children out of the MAP - if they don’t want to have their child tested, they must keep them home on test day, and, presumably, the test make up day. While this may not affect high school so much, it obviously makes it nearly impossible for elementary school parents to opt their children out.  This is a severe policy - the State Education Department recognizes the parental right to opt children out of state testing.  Why is the City being so strident?

Taken together we believe it is becoming clearer and clearer that these tests will have serious consequences for all schools, even if they do not have high stakes attached for students. (The privacy issues in the data-handling remain considerable for students, as well.)

If the system is being built so that central admin (sups and above) can compare school performance, it won't be long until principals are called on the carpet (Edustat/comstat style)….And that rolls downhill to teachers in schools with low scores.

My own belief, shared by most of those in my progressive education circles, is that these tests have almost zero value, especially in high school.  When Jesse Hagopian led the MAP boycott in 2013, one of the reasons was that the margin of error exceeds the expected growth for high school students, rendering the test invalid.  I'm 99% sure that is still the case.

These have not only been useless - they have been destructive.

To evaluate how much kids have not learned we give glitchy full period tests on things that the kids may or may not have been taught - our students are losing learning time - our teachers are frustrated - for a test without any value that we can discern.