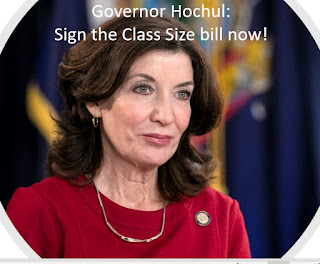 A few weeks ago, the NY Post ran an oped by a plaintiff in the NYSER case, which was an educational lawsuit  filed in 2014 and settled last fall,  after the Governor agreed to fully fund the amount to NYC schools owed them from the Campaign for Fiscal Equity case.

This NY Post oped, urging the Governor to veto the class size bill that was passed overwhelmingly by the Legislature in June, was full of factual errors and misinformation, including the false claim that the NYSER plaintiffs never discussed class size and never wanted any additional funding to go towards lowering class size.

We knew that this was untrue, as Class Size Matters was one of the members of the NYSER coalition along with several Community Education Councils.  The class size issue was discussed several times at our meetings, and much of the class size data we had collected was included in the lawsuit itself as evidence of the inadequate conditions that still persisted in NYC public schools.

I reached out to some of the other named plaintiffs and CEC Presidents who had joined the NYSER coalition as participants in the lawsuit, and asked if they would sign a letter, which pointed out the numerous factual errors in the oped.  The letter also pointed out how there was broad support for the bill among NYC education and civil rights groups, and the larger parent advocacy community.  Many of the NYSER plaintiffs that I was able to contact agreed to sign the letter, and concurred that the oped was full of errors.

I sent the signed letter to the NY Post oped editor, who refused to publish it or correct the errors in the oped. The NY Post letter editor also refused to publish it, even in an abbreviated form.  All this reveals  how little the editorial side of the Post cares about factual accuracy, as long as the claims made align with their right-wing positions, which generally oppose any more funding for public schools or any meaningful progressive reforms.

So I rewrote the piece in the form of a letter to the Governor, which I sent to her today.  With the permission of the signers, it is posted below.  -- Leonie Haimson

As named plaintiffs of the lawsuit filed by New Yorkers for Students’ Educational Rights (NYSER), and/or Presidents of Community Education Councils that were members of the NYSER coalition when the lawsuit was launched, we could not disagree more sharply with the erroneous and misleading claims  made in a NY Post July 21 oped that urged you to veto the class size bill.

Contrary to the assertions made in that oped, class size was a frequent topic of discussion at meetings of the plaintiffs, and the excessive class sizes of NYC students were extensively described in the NYSER lawsuit complaint as key evidence of the inadequate conditions in our public schools that needed to be addressed.

We strongly support the class size bill that was passed overwhelmingly by the Legislature in June, as do the following organizations which wrote memos of support for the bill:  the NAACP, Alliance for Quality Education,  the Educational Council Consortium, NYC Kids PAC and the Education Law Center, which now represents the Campaign for Fiscal Equity case, the original lawsuit whose settlement has resulted in $1.3 billion in additional funds being awarded to NYC schools.

The Chancellors Parent Advisory Council, which represents all the PTAS in the city, also passed a resolution last spring in support of the  class size bill.

Why? The research is clear that smaller classes benefit all children, but especially those who need the help the most. Students who gain the most from smaller classes are students of color, those from low-income families, English Language Learners, and children with disabilities – who make up the majority of students in NYC public schools.  Thus, class size is a driver of educational equity, which makes it especially unfair that our students have long been subjected to class sizes far larger than those in the rest of the state.

All this explains why class size remains a deep concern for most NYC K12 public school parents, and smaller classes their top priority according to the Department of Education’s own surveys nearly every year.   We urge you to sign the class size bill as soon as possible

Milagros Arcia, AKA Katherine A Arcia_GChanglerth, named plaintiff in the NYSER lawsuit