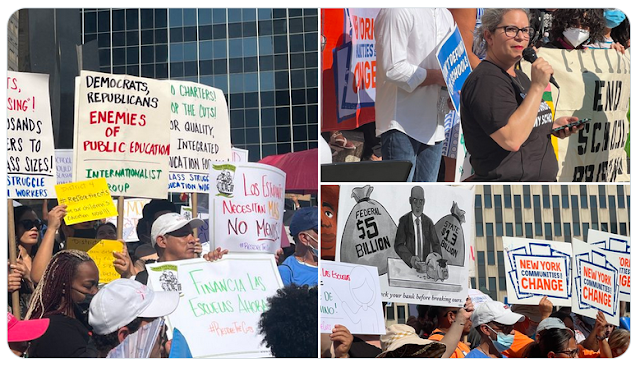 What a morning!  First there a huge rally at Foley Square, with parents, teachers and advocates inveighing against the grotesque budget cuts to schools.  Tamara Tucker, the lead plaintiff in the lawsuit against these cuts, spoke first, and her photo at the microphone is above.

Tamara and I left the rally at about 9:40 AM, and quickly walked over to the courtroom at the NY State Supreme Court, 80 Centre St., room 308 so as not to miss our chance to witness the oral arguments in the case before Judge Frank.  The courtroom was already half full, mostly with reporters and city attorneys, and soon would fill up completely before the hearing started.

Among the parents I noticed aside from Tamara were Tom Shepherd and Kaliris Salas-Ramirez, two PEP members, and NeQuan McLean, CEC16 President.  Tom and NeQuan had also provided us with affidavits about how the public process in adopting the budget had been contrary to what’s required by state law.

The court officer said that we had to wear masks unless we were vaxed or boosted in the last six months,.  A few people went up to show their vaccination cards; I kept my mask on even though I’ve been recently boosted.

Jill Jacobsen, reporter for NY1, showed up with a cameraman, and submitted a piece of paper requesting that  theyvideotape the proceedings.  The Court officer came back and said the Judge respectfully declined the request.  (I didn’t know that was possible in NY courtrooms, did you?)

Judge Frank came in and jokingly said, “My Gosh!  So many people in the courtroom!”  He immediately launched into the substance of the case.  He thanked both sides for their papers, said he was on a sharp learning curve on the issues involved, and focused on the Emergency Declarations that the DOE had been using to short circuit the PEP vote, for at least ten years out of the last twelve.

He asked the City’s attorney, Jeffrey Dantowitz, about the latest Emergency Declaration issued on May 31, what did it say?   Did it mean the PEP didn't have to vote before the budget is determined?  Dantowitz said that it did, but that in any event they did eventually vote to approve the budget later, even if this was after the Council voted to adopt the budget.

The pro bono attorneys for the plaintiffs, Laura Barbieri and  Arthur Schwartz from Advocates for Justice stood up and said the Emergency Declaration was obviously invalid; it described no explanation of any actual emergency, and no affidavit from the Chancellor was submitted  to attest to an emergency.  Arthur said, “It’s not like 9/11 or Covid just happened.”

Judge Frank pointed out that as we had reported in our Memo of Law, year after year, the DOE has issued Emergency Declarations with boilerplate language, and that they appeared to be issued just to dismiss the importance of the PEP vote.  Even the Chancellor said at the PEP meeting that their vote didn’t matter.

Dantowitz said their vote did matter, and that groups like Class Size Matters had put out messages about the budget cuts before both the City Council and the PEP votes, and these bodies had still voted to approve the budget.  A vote is necessary eventually from the PEP, he said, because the Emergency Declaration only lasts so long. (60 days I believe).

The Judge pointed out that the Council could have voted after the June 23 PEP meeting, but Dantowitz claimed that was too late for schools to start planning for next year.   He added that a tremendous number of issues need to be negotiated with the Council (which doesn’t explain why they seemed to rush the vote earlier than the June 30 deadline).  He pointed out that the budget had been “overwhelmingly adopted” by the Council and read out a quote from the Speaker attesting at the time to how wonderful the final budget was.

He also cited a NY Post article, that reported how budget had been held up for a few days because of the proposed budget cuts to schools, and that we have to look at the budget in its entirety, and not just the education budget.

Laura said that if the education budget had been posted online and presented for public comment on April 26, the same day as the Executive budget was released, there would have been 45 days of comment and still voted  before the City Council voted on June 13.  (In my affidavit, I pointed out this could have been happened by June 10.) .  Or, she said, the Chancellor could have called an Emergency vote of the PEP as Chancellor Klein did in 2009 when the Council was about to vote on the budget before the PEP, and then-Manhattan PEP member Patrick Sullivan alerted the DOE to the fact that this was illegal.  (For more on Patrick’s central role in the genesis of the current case, see today’s Daily News.)

This idea seemed to resonate with the Judge, who repeated that the Council did not have the benefit of hearing from the 70 people who spoke out against  the budget cuts at the PEP meeting on June 23.

Dantowitz kept on saying that it was “pure speculation” that the Council would have voted differently, but the Judge seemed to lose patience with that argument.

Judge Frank said that next question is, assuming the process was “kaput”,  can I tell the Council to revote, or does that violate the separation of powers?  Arthur and Laura cited past cases when the Court has instructed the other branches of government what to do when they flouted state law or the constitution.

Laura stood up and pointed out that  41 of 50 Council members signed a letter that they regretted their vote and were not told about the impact of these cuts.  Many have since said they were misled by DOE who insisted that only unfilled position would be eliminated as a result, but now we know that at least 700 teachers have been excessed.  This is “material misrepresentation,” as she put it.  The Judge said he would consider whether to instruct the Council to revote, or instead allow them the opportunity to do so.

The City’s attorney got very upset as it was becoming clear that he was losing his case, at least as far as Judge Frank was concerned.  He said, “I don’t want…” and the Judge interrupted, “I know you don’t want any of it.”

Then the discussion became what the Preliminary Injunction would say, would it be based on the previous TRO that said last year’s budget would be in place until the Council revoted, or something else?

As far as returning to last year’s budget, the city’s attorney said,  “That ship has left the port.  Plans are being made, goods ordered, to revert to last year’s budget would be detrimental.”  He argued that the plaintiffs should have filed the case on June 13, as soon as the Council vote happened.  “Relief is inappropriate; we ask that the preliminary injunction be denied.”

Laura said that even as late as last night, the DOE added money to school budgets by allowing them to repurpose $100 million in recovery funds that now could be used for teacher salaries, and quoted from a press statement from the Speaker, that this $100 million offer was “inadequate and  misleading.”  The City’s attorney insisted that was “not new money, but they were simply robbing Peter to pay Paul” (something I tweeted critically last night!)  He offered to have the City agree to carry out the budget process properly in future years, as long as there didn’t have to be a Council revote this time.

Dantowitz also claimed that the DOE budget couldn’t be invalidated without invalidating the entire city budget at the same time (which is absurd.).  He muttered something about the need to balance the entire budget etc.  Laura pointed out that there are billions of dollars in the city’s reserve as well as unspent education funds from last year, according to the Comptroller.

Finally , the Judge asked both sides to prepare papers on how the preliminary injunction should be written.  The city's attorneys have till the end of  today; the plaintiff’s attorneys have until the middle of day Friday.  He said he would issue his decision by the end of day on Friday.

I hope the City doesn't appeal which would drag out the process even longer, as Laura says below. 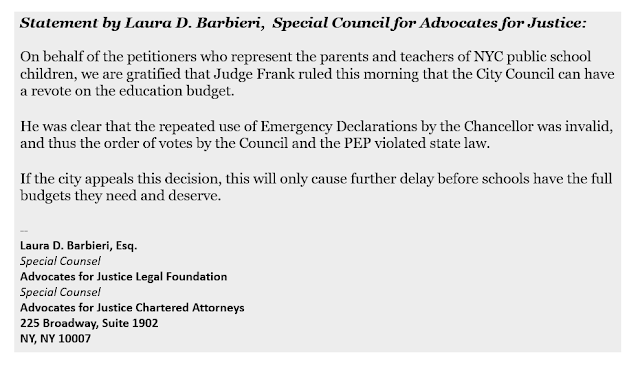