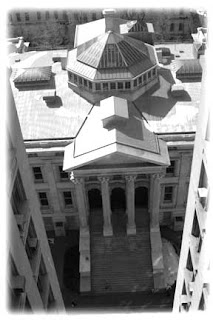 Monday night at the meeting of the Panel for Educational Policy, members voted on the new proposal to hold 8th graders back on the basis of their test scores. It was standing room only. About 50-70 parents and kids were locked out at ’s front door. We chanted from the steps, ”Let us in.” but they never did. Inside, more parents cried out “shame”, but to no avail. The Mayor, the Chancellor and their political appointees on the PEP have no shame.

From all reports, Patrick Sullivan, the Manhattan PEP member and fellow blogger here, was the hero of the night, aggressively questioning the rationality of this proposal. Read his account here. Patrick ended up being the sole vote in opposition, when the rep switched positions half way through. The proposal passed even though DOE admits to having no plan to improve the opportunities of low-achieving 8th graders– which they say they’ll come up with sometime in the indeterminate future.

Several years ago, the research group RAND was commissioned to do a longitudinal study of the results of the administration’s promotional policies – the result of pressure from a previous PEP vote. Yet RAND's findings, including surveys of principals and others about whether holding back 3rd and 5th graders on the basis of their scores on two standardized exams is fair or productive, are not going to be released to the public until late in 2009. After some protest, PEP members were allowed to see the interim results, and at least one reporter was also allowed to view them – on the condition that they not disclose what they read.

This study is being paid for by our tax money, and it’s a disgrace that the public cannot have full access to its findings.

The results of our independent parent survey prove that Klein’s repeated claims that this policy has widespread support among parents are false. In our survey, a majority of parents opposed making the decision about a student’s promotion primarily on the basis of standardized tests. Here’s a typical comment from a parent: “No single test should ever determine a child’s future.” A Queens mom: “I graduated from sixth grade with a fourth grade reading level…I eventually caught up with my peers and now have a Master’s degree…under mayoral control I would have been left back.”

Grade retention based on test scores is a policy that has no backing in research, has been shown to increase dropout rates, and is a form of educational malpractice. The proposal being pushed through by this administration is yet another instance in which pure political muscle, ideology and PR spin wins out against research and sound educational practices.

It is truly a shame that this administration repeatedly shows its lack of regard for our kids’ futures, as well as expert opinion by putting in place policies that have repeatedly been shown to fail, instead of those, like reducing class size, that have been proven to work.