On the fourth anniversary of the Monday night massacre; what have they learned? 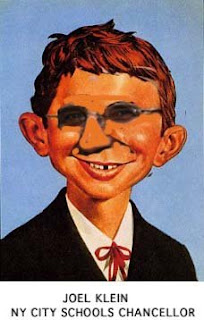 On Monday, the Panel on Educational Policy will vote on a proposal to hold back 8th graders on the basis of their test scores. Manhattan Borough president Scott Stringer, and his appointee to the Panel, Patrick Sullivan, just announced their opposition to this proposal, and Sullivan is expected to vote against it. Instead, Stringer recommends policies that have been shown to work to raise student achievement, such as lower class sizes and earlier intervention.

Tomorrow is the fourth anniversary of the Monday night massacre, when Bloomberg fired two of his own appointees to the Panel right before the vote on the third grade retention policy. In their stead, the Mayor appointed two high level officials of the Health and Hospitals agency and the Housing Authority, who sit on the Panel to this day, neither one saying a word except to vote yes for every single administration proposal.

See this NY Times account the day after the Monday night massacre, in which Klein said: ''I think it is a legitimate vote,'' he said, adding: ''I don't think it was rigged.''

And he insisted the school system had proper checks and balances. ''The mayor has said when he runs for re-election that he should be held accountable,'' Mr. Klein said. ''That is the democratic way.''

Since then, test-based grade retention has been extended to fifth and seventh graders, and now is being proposed for 8th graders as well. According to the News, “only 1,300 out of 77,000 eighth-graders were held back last year, but nearly 18,000 would be in danger of failing under the new proposal.”

The News article also describes how yesterday, a group of parents stormed Tweed, demanding to speak to Klein about the policy: "About 50 members of the Coalition for Educational Justice rushed the front door of education headquarters and chanted "Let us in!" and "We want Klein!"

Grade retention is a policy that has absolutely no backing in research, and is commonly believed to be educational malpractice. Over one hundred academics, heads of organizations, and experts on testing from throughout the nation signed our letter protesting the grade retention proposal in 2004. It’s as though the Mayor and Klein had commanded all the city's public hospitals to prescribe some quack medicine for cancer -- it is really that bad.

Even more pointedly, check out Ending Social Promotion: Dropout Rates in after Implementation of the Eighth-Grade Promotion Gate which concludes that eighth grade students who were retained increased their likelihood of dropping out by 29%.

But by the time next year’s eighth graders drop out of school, Bloomberg and Klein will be safely out of office. What have they learned in four years? Apparently nothing.

I agree. However, while your ideas are good, it seems the educrats either want social promotion or grade retention. Until this mindset changes, I wopuld recommend grade retention. I see too many 8th graders promoted to high school, incapable of doing the work and eventually dropping out.