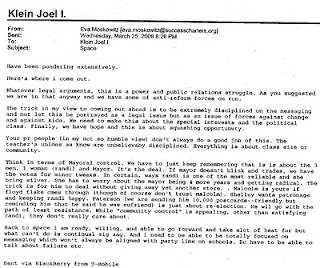 Some parents have asked me why I am involving myself in such a controversial issue as charter schools, seemingly unrelated to class size. But I don’t think it is.

District public schools that have a higher concentration of high-needs students are losing classrooms, libraries and intervention spaces to charter schools, which is neither equitable or good policy.
This is especially damaging, given the fact that only three out of 13 district schools slated to lose space next year to charters have reached their mandated class size reduction targets. For more on this see here, my comments on the charter co-locations that were voted on by the PEP last night.
Yesterday, on Good Day NY, when asked why the Chancellor seems biased towards charters, I said I didn’t really know, but that I suspected that many of the charter school operators are receiving preferential treatment because of their political connections.

A perfect example is revealed in today’s column in the Daily News by Juan Gonzalez, and in the emails he FOILed between Eva Moskowitz and Chancellor Klein.

Not only did the Chancellor intercede repeatedly with his own staff to get her chain of charter schools more space, when she had already received more than the formula would allow, helped her recruit parents for her schools by giving her access to their names and addresses, and also appeared at numerous fundraisers and helped her raise a million dollars from the Broad foundation, explaining how politically useful she was in organizing thousands of charter school parents to support Bloomberg, the continuation of mayoral control and raising of the charter school cap.
As Klein wrote to Dan Katzir of the Broad Foundation, “she’s done more to organize parents and get them aligned with what our reforms than anyone else on the outside.”

In her emails, Moskowitz repeatedly refers to her “army of parents” and many of them were indeed at attendance last night in the PEP meeting, along with their kids, cheering and chanting in support of their expansion into district buildings – all of which were approved, except for one.
Click on the email above, and check out the others on the Daily news website here. You'll be amazed.
You can also check out my appearance on Democracy Now .
Posted by Leonie Haimson at 2/25/2010 06:12:00 PM

I read some of the emails (thanks for posting them).

Much of it sounds like a teenager telling Daddy how good she did at school today.

Am disgusted and appalled.

But what's even more disgusting and appalling is Leonie Haimson saying that Eva's fight for educational opportunity deserves neither Chancellor Klein's support nor Eli Broad's seed money nor her families' "small army" advocating, clawing desperately for change for even more students in Harlem.

When you compare the results of HSA with those of the schools Eva's fighting like heck to expand in (the very schools you support by challenging Eva), it is my firm hope and most adamant belief that you guys will be found to be on the wrong side of both social justice and history.

I wonder how many kids were "counseled out" of Eva's school. Who are you kidding??? We educators know the secret to a school's success. And that is cherry-picking your students for your school. People running public school should be so lucky. In the meantime, kids who could really benefit from small class sizes are thrown to the wind.
Too bad if their parents don't give a crap.
Too bad if their parents don't know to apply.
Too bad if your child has learning disablities.
Too bad if your child has just arrived from South America.
TOO BAD!
A better education has indeed been offered to a select few. What about the rest?
Charters should be allowed to exist...in their own space using their own funds. No public school child should have to sacrifice ANYTHING to accomodate a charter school. Period.

I am honestly appalled by the unprofessional level of communication Moskowitz is dishing out to Klein. This is a clear sign of the improper relationship she is calling upon to get her needs met. At the very least, these interchanges should be at a much more professional level. How is it that Klein has so much "free time" to attend all of these events/fundraisers for Moskowitz, but rarely visits his own schools on a regular basis (aside from the rare PR stunt)?