Five reasons to say NO! to the DOE's $120 million contract with Verizon

UPDATE: Since posting this on Friday, new sponsors/supporters of this protest include the Communications Workers of America (CWA), BNYEE, CPE-CEP, New York Communities for Change, ICE, S.E.E.D.S, The MANY,  TJC and the UFT.  Be there or be square! 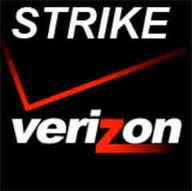 On Wednesday, August 17, the Department of Education's Panel for Education Policy will vote on a $120 million two year contract with telecom giant Verizon to wire our schools.   There are at least five good reasons to oppose this contract ( see below.)
Join us at the PEP meeting near City Hall to protest this immoral and possibly illegal contract.  At the same time the PEP will be voting on a spending plan that will cut our school budgets - for the third year in a row - and lead to sharply larger classes.
Whether you can join us or not, please  send the message below to the members of the PEP:
What: Picket and Protest
Where: Murry Bergtraum HS, 411 Pearl Street, Manhattan (4/5/6 or N/R to City Hall / Brooklyn Bridge)
When: Wed. August 17, 2011 at 5 PM
Why?  Verizon is shortchanging their own workers and stealing from schoolchildren!   Say no to more giveaways to private contractors and more wasted spending on technology while our class sizes are increasing! Tell the PEP to vote down the Verizon contract with the DOE!
Take a stand against the increasing section of our education budget given to private contractors and online for-profit vendors, like Rupert Murdoch's Wireless Generation.
Sponsored by: Class Size Matters, Grassroots Education Movement, New York Charter Parents Association, NYCORE, NYC Parents Union, Teachers Unite (list in formation)
And please send the following email to the PEP:
Dear PEP member:
Please vote no on the $120 million contract with Verizon. Here are five good reasons:
1.  45,000 Verizon workers are currently on strike, as management has demanded a long list of concessions, including cutting their health benefits, pensions, and sick time – givebacks amounting to $20,000 per worker. Meanwhile, the company has $100 billion in revenue, net profits of $6 billion, and Verizon Wireless just paid its parent company a $10 billion dividend. The top five company executives have been paid more than a quarter of a billion dollars over the last four years.  Why should the city be contracting with such a greedy and unethical company?
2.      Verizon is implicated in the recent scandal in which the Special Commissioner of Investigation found that a consultant named Ross Lanham in charge of school internet wiring stole $3.6 million dollars through a false billing scheme, and that Verizon profited from and  “facilitated this fraud.” Though DOE admits that “Verizon is in discussion with the DOE regarding repaying of the overcharges,” the company has not yet agreed to pay back any of this money, and the case has been referred to the US attorney’s office for possible prosecution.   Why should DOE reward Verizon by paying the company more millions?
3.       In the same document in which the DOE outlines the contract, there are twenty other instances listed of suspicious or illegal behavior on the part of Verizon, triggering numerous investigations.
4.      All NYC public schools are already wired for the internet; but according to the DOE, this new round of wiring is for high-speed internet and hi-definition video  to facilitate the expansion of online learning and computerized testing.  This is occurring at the same time as budgets are being cut to the bone, schools are losing valuable programs, and class sizes are rising to the highest level in over a decade.  A quarter of our elementary schools are so overcrowded they had waiting lists for Kindergarten.  It is outrageous that in the midst of this budget crisis, the DOE should be spending $120 million for unnecessary technological upgrades when children do not have seats in their neighborhood schools.

5.   Finally, this contract with Verizon began on January 1, 2011, and DOE is only now asking for the PEP  to approve it “retroactively.”  But there is no allowance for retroactive contracts in state law, unless the chancellor finds that due to an emergency, it is necessary for “the preservation of student health, safety or general welfare” and provides a written justification.  This was never done.  Thus this contract with Verizon is likely illegal on the face of it.