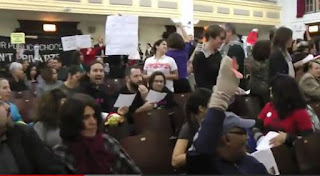 As expected, the Panel for Educational Policy (otherwise known as the Panel of Eight Puppets) rubberstamped two new, very controversial charter co-locations of Eva Moskowitz’s expanding chain of Success Academy last night, despite huge community opposition, and hundreds of raucous and vociferous parents and teachers who turned out.  Perhaps DOE should be renamed Department of Eva.
Before the meeting began, the audience voted no-confidence in the PEP, with a show of hands; and the public comment period featured a very funny interview of “Eva” played by Gloria Brandman.  (Here are some news clips:  Times, NY1, Daily News.) There was even more police presence than usual and signs up everywhere that people disrupting the meeting would be ejected; clearly DOE is very spooked by the growing militancy of protesters.
GothamSchools reported that the pro-charter parents (who were relatively few) were brought by a new organization called Families for Excellent Schools.  This is the third or fourth organization that the privateers have started up in their attempt to organize charter parents.  Is it  so difficult to pull this off, or do they figure that with Bloomberg in charge they get their way anyway, without any pretense of widespread grassroots public support?
At the conclusion, Patrick Sullivan of Manhattan was the only one to vote no;  Queens & Bronx appointees abstained &  the Brooklyn rep, Gbubemi Okotieuro, voted yes, along with all of the eight mayoral appointees and Staten Island.  Okotieuro said that Brooklyn BP Marty Markowitz’ position favoring the charter co-locations was “well-known.”   (Did everyone know this but me?  Did Markowitz ever put out a statement explaining why?)
Credit goes to the hundreds of people who made the trek out to a fairly remote part of Queens, including three elected officials from Brooklyn, who all spoke in opposition: AM Jim Brennan and CMs Lander and Levin.
Just as contentious as the charter school co-locations was the proposal to expand Esperanza Prep Academy inside a building where the kids in the TAG school are already pressed for space. TAG is the only diverse Gifted and Talented school in Manhattan, with more than half black and Hispanic kids.  The school is already overcrowded at 108% utilization and the kids already eat lunch at 10 AM;  with the Esperanza expansion, it is slated to lose additional rooms.   The parents are justifiably concerned about increased overcrowding as well as safety issues, with Kindergarten students potentially sharing bathrooms with HS students.  The parents and teachers at Esperanza, one of the few dual language middle schools,  also came out, understandably, to support expanding their school into the upper grades.
You would think that if there’s any group Walcott would be interested in nurturing it would be the city’s high-achieving minority kids, given the DOE’s sorry record with diminishing numbers of minority students enrolled in gifted programs and  at the selective high schools, but if so, that was not evident last night. He apparently lets his incompetent Portfolio office make all their decisions on their own.

Marc Sternberg, head of Portfolio, was as unimpressive as usual, with poor command over any of the facts or figures,  and could not even promise that the TAG kids would not be forced to share bathrooms and the lunchroom with HS students.  He justified the moving of Brooklyn Success to Cobble Hill because of Kindergarten overcrowding…on that basis, you could see charters in nearly every part of the city, since one quarter of all schools had waiting lists for K last year.
Of course, the DOE’s ultimate failure to deal with this overcrowding crisis that seems to be neatly falling into the hands of the privateers & charter operators.
I made a short and probably futile speech about how all the DOE has done over the last nine years is undermine our public schools, anger parents, and  tear apart communities, with a regimen of school closings, charter expansion, worse overcrowding and increased class size.  And the results are dismal: NYC’s uniformly poor results on the NAEP scores, which were released last week, revealing how our black, Hispanic and white students have all fallen further behind their peers in the other large cities since 2003 in all categories tested, and no significant narrowing of the racial achievement gap.  I urged Walcott and the other PEP members to reconsider, learn from the past, and take another course.  Did they really want to sit through two more years of protest and harangues from furious parents?
If I’d known, I would have mentioned how badly his poll numbers have slipped, as indicated in yesterday’s Quinnipiac poll .  The survey shows Walcott's approval ratings falling from 39% to 33% since October, with 33% of voters having no opinion.  His overall disapproval rate is at 34% and among public school parents he fares even worse, with 45% having a negative view of his performance.
I don’t know who  the mayor or Walcott talk to or get advice about school policy, aside from (probably) Eva Moskowitz and the hedge fund crowd, but they need to wake up,  because at this point their education legacy looks dismal.   (For more on these poll numbers, see GothamSchools and Daily News.)
Posted by Leonie Haimson at 12/15/2011 03:25:00 PM

How about organizing an Occupy Markowitz campaign?

I'm for that. We'd have to dress up like clowns.