Worst and best education events of 2011 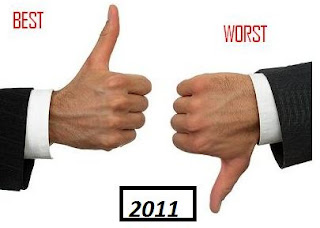 Please add your suggestions for what I've missed in the comment section, and Happy New Year to all!
Worst education news of 2011:
Schools suffer huge budget cuts across the nation & class sizes increase, with the support of billionaires like Bill Gates, Bloomberg and other members of the .0001%,  who send their own kids to expensive private schools and  who claim that resources and class sizes don’t matter.
The child poverty rate grows even higher, with 11 states added to the list of those with rates of twenty percent or more.
Cheating scandals from Atlanta to DC to Philadelphia reveal the pressures of high-stakes testing.
The Gates Foundation continues its hegemony over education policy, providing funding to shady right-wing organization ALEC, responsible for much of the worst anti-union, anti-equity, and anti-kids legislation being passed all over the country.
Hundreds of millions of dollars from the Billionaire Boys Club of Gates,  Broad, the Walton family, and the Koch brothers are funneled into creating and expanding numerous Astroturf organizations like Stand for Children, Students First, Teach Plus, 50Can, etc. all devoted towards spreading their tentacles into  both political parties, to choke off democracy, demonize teachers, mandate more high-stakes testing, and privatize our public schools.
States rush to pass multiple laws in response to Race to the Top bribery, mandating unreliable teacher evaluation systems tied to test scores, alignment with the experimental (and controversial) Common Core standards, and the spread of charter schools; while  the Obama administration holds out the promise of NCLB waivers based on the same damaging pre-conditions.
More districts follow the corporate model of Bloomberg & Co., by awarding useless merit pay schemes, divisive charter co-locations, heart-breaking school closings, and wasteful payments to consultants and private managers, rather than hiring teachers, expanding programs, or investing in the classroom.
The Gates Foundation, along with Rupert Murdoch’s Wireless Generation, creates a new limited corporation, euphemistically called The Learning Collaborative, to collect and crunch confidential teacher & student data, that states have voluntarily (and probably illegally) provided to them without parental consent.
Charters continue to expand rapidly,  with over two million students enrolled, while hedge fund operators buy off politicians, and billionaires like Bloomberg donate big bucks to the campaigns of pro-charter school board members in Louisiana, to ensure their continued spread statewide – even after 70% of New Orleans schools have already been privatized.
The growth of online learning also continues apace, despite the lack of evidence of its efficacy, impelled not by the priorities of parents or what’s good for kids but by the greed of edu-entrepreneurs and profiteers.
Best education news of 2011
The popular uprisings in Wisconsin spark a national wakeup call about the heinous attempts to undermine the rights of public sector workers, galvanizing resistance throughout the country and leading to the repeal of Ohio’s anti-union and anti-teacher legislation, SB 5.
The emergence of Occupy Wall St sparks protests nationwide and impels a sharp awareness about the widening income gap, and the way in which the 1% has perverted  our politics and educational policies, with mic checks taking over school board meetings from NYC to Rochester to Chicago and elsewhere.
The gathering and amplification of opposition voices at the SOS March in DC, and the appearance of Matt Damon as one of the first bonafide celebrities to help us push back against the big money and power of corporate education reform
The parent voice grows in influence, with the emergence of Parents Across America and its affiliates, speaking out about how the current policies are undermining our schools, and propounding an alternative vision of progressive education reform.
Diane Ravitch’s star grows ever brighter, as the inspirational and intellectual leader of the anti-corporate reform movement, as she travels the country, headlines at the SOS march,  appears on Jon Stewart’s Daily Show, while her bestselling book, The Death and Life of the Great American School System, comes out in paperback.
The National Academy of Sciences and academic experts release multiple reports, attesting  to the invalid, reductionist, and intellectually vapid nature of test based accountability systems, value –added teacher evaluation, and merit pay.

The revulsion against high stakes testing grows, and a national opt –out movement emerges, energized by the movie Race to Nowhere  and brilliant thinkers like Yong Zhao.
Mayoral control is unmasked as a failure at improving schools or student outcomes in either NYC or Chicago, and most recently, the mayor of Rochester NY  gives up his attempt to take over  the city’s schools.
Cathie Black is fired as NYC chancellor, putting to rest the notion that a successful  business career is good preparation for running a large school system, while Broad-trained superintendents are ousted from their positions due to popular opposition, including Maria Goodloe-Johnson in  Seattle, Arlene Ackerman in Philadelphia,  and Lavonne Sheffield in Rockford, Illinois, (though other Broadies, like Jean Claude Brizard and John Covington , merely move from one district to another, in a dance of the lemons.)
Independent and progressive school board members are elected in Seattle WA, Wake County NC and elsewhere.
Jonah Edelman and Stand for Children are self-outed as corporate reform toadies.

After sleeping through much of the Bloomberg administration, the NY Times finally begins publishing actual investigative education reporting locally,  by  Fernanda Santos and Anna Phillips, publishes trenchant opinion pieces critiquing school “choice”  like this  and this;   features a pivotal piece by Sam Dillon on the overweening influence of the Gates Foundation, runs a terrific series on online learning and gives a platform to the invaluable Michael Winerip, who returns to the scene just in time to rake clueless educrats, charter operators, and oligarchs over the  coals.
NY principals join the battle vs. inane and unworkable teacher evaluation systems.
The real reformers take center stage in the movie “The Inconvenient Truth behind Waiting for Superman” a documentary made for pennies by NYC teachers, now distributed in all continents and shown in every state, without any promotional budget.
Finally, despite the big bucks and political muscle of the Billionaire Boys Club, the hedge funders, the privatisers, and the other edu-entrepreneurs, actual stakeholders, including parents and teachers, dominate the online debate through tweeting and blogging – and use social media tools (which are free, after all) to spread the truth about #corpreform and #realreform.
I will end with a quote from my mentor and hero, Diane Ravitch:
“"We need to say, again and again, that they may have money and hold the reins of power (for now), but their ideas are failing. And now the public is getting it. And the louder we are, in whatever forums open to us, the more the mask will fall away, and the public will understand that the corporate reformers have hijacked the language of reform to protect the privileges and power of the 1% and we are reaching the public because we are many and they are few."
Thanks to my friends and compadres at Parents Across America for many of these suggestions, and apologies if the list is too NY-centric. And let’s all hope for a better 2012 for parents, our children and public schools everywhere.
Posted by Leonie Haimson at 12/31/2011 12:41:00 PM

Great list, Leonie and PAA! I especially want to underscore the role of the NY principals in what will probably prove to be a major turning point against "top down" education management in New York City and State.

A very competent and though list. I would just like to mention the constant anti-UFT and public school teachers columns expressed by the NYC media,especially the Daily News and NY Post as totally unfair.
.

Great list! Sadly, I would have to add to the Worst list-2011 NYS ELA revealed that only 9.4% of 8th grade students with disabilities are proficient yet the Board of Regents continues to endorse special education mandate relief that will align our state with the federal floor in an attempt to save money. None of these proposals demonstrate any cost savings. In fact, some could cost the state money.

Great content! Great ammunition against the antiquated billionaire moguls and bigots. A Progressive Educational Alternative is an excellent concept and so is a Horizontal Education Management System.

Is there any chance of a lawsuit being brought against NYS for releasing confidential student information without parents' consent? I have an 8-year old in the NYC public schools and I'm outraged that Gates/Murdoch has access to my son's information and I have no recourse should I wish to withhold it. It seems to me this is a clear violation of our right to privacy.