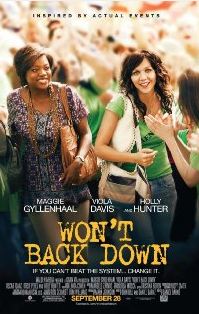 On Tuesday, August 14 a Concert called TEACHERS ROCK, presented by Walmart  & promoting the movie “Won’t Back Down” will be held in LA: with appearances from Carrie Underwood, Meryl Streep, Jennifer Garner, Matthew Morrison, Foo Fighters’ Dave Grohl, Usher, Maroon 5’s Adam Levine and others. On Saturday, August 18 the concert will be aired on CBS.
The movie itself, “Won’t Back Down,” will premiere September 28. This film already has sparked much controversy.  Below see an FAQ explaining why.  This fact sheet is also available as  a downloadable pdf. – Leonie Haimson


I’m hearing there’s a lot of controversy about the movie “Won’t Back Down.”  Why?  Many people believe the film promotes the privatization of public education and inflames a political climate in which teachers are unjustly disparaged and blamed for the effects of poverty and educational inequity.
What is the movie about? The movie tells the story of a group of parents and teachers who use a “Parent Empowerment” law, better known as the Parent Trigger, to take over a school that is failing their children. Parent Trigger legislation, promoted by the right-wing organization American Legislative Exchange Council (ALEC), has been passed in several states, including California, Texas, Louisiana, and Mississippi, and is being considered in others. But while the movie depicts an inspiring story of parental revolt, actual efforts to use the Parent Trigger have been driven by billionaire-funded supporters of privatization, and have sparked acrimony and division. None of these efforts has actually improved a school. [See Beyond the Hype of the Parent Trigger; Just the facts.]

Who is behind the movie? The movie, due to open September 28, is produced by 20th Century Fox, owned by Rupert Murdoch, and Walden Media, owned by Philip Anschutz. Murdoch's right-wing politics are well known. Anschutz is an oil-and-gas billionaire who co-produced the anti-teacher film, “Waiting for 'Superman'.” He contributes to organizations that oppose gay rights and support teaching creationism in schools. Anschutz has also donated to Americans for Prosperity, founded by the Koch brothers, which opposes environmental regulations and union rights, and to the political career of Gov. Scott Walker of Wisconsin.

What does the Parent Trigger law call for?  If 51% of parents at a school can be persuaded to sign a petition calling for any of a narrow set of options – either firing all the teaching staff, closing the school, or privatizing the school by turning it over to a charter operator, this must occur.  None of these options has any track record of success.

How did the Parent Trigger law originate?  The Parent Trigger was first conceived by a LA-based organization called the Parent Revolution, founded by a charter school operator and funded by the Broad, Walton and Gates Foundations.  The legislation was introduced in California by then-State Senator Gloria Romero, who now heads the California branch of the pro-privatization organization, Democrats for Education Reform.

Have Parent Trigger laws worked?  The first time the “parent trigger” was tried, Parent Revolution sent operatives into Compton CA, to ask parents to sign a petition saying that their local elementary school should be turned into a charter school. Some parents who signed the petition later said they been misled,  the effort was mired in lawsuits and ultimately fizzled. More recently, operatives trained and paid by the Parent Revolution urged parents at the Desert Trails School in Adelanto CA to sign two different petitions: one calling for smaller classes and other positive reforms, the other demanding that the school be turned over to a charter operator.  After the organizers submitted only the charter petition to the authorities, nearly 100 parents asked to withdraw their signatures.  Yet a judge has ruled that parents could not rescind their signatures and the conversion to a charter school should go forward. Even Gloria Romero, the author of the Parent Trigger law, has criticized the organization’s tactics, and said that presenting Adelanto parents with two different petitions to sign was “needlessly confusing.”
What’s wrong with the Parent Trigger?  The idea of “choice” has been manipulated by the corporate reformers and spread by groups like ALEC, who seek to use methods such as the Parent Trigger to turn public schools over to privately-managed charters. This is not real choice; nor is it parent empowerment.  Most parents want to see their neighborhood public schools strengthened, with small classes and less emphasis on standardized testing. Even Ben Austin, head of the Parent Revolution, has admitted that most parents are not interested in turning their school into a charter, but would rather focus on improving their existing public schools.

But are there other ways to provide better “choices” for parents?  There are many ways that districts can provide more and better choices within the public school system, by creating magnet schools and specialized schools that unlike charters, do not drain resources from public schools, privatize public buildings or take decisions out of voters’ hands. Why should a public school built with taxpayer funds be given to a private corporation just because 51% of current users signed a petition?  If a local firehouse was ineffective in putting out fires, or a police station in fighting crime, would we choose to hand these public services over to a private company, or would we demand that our elected leaders improve them?

What about “parent empowerment”?  Charter schools are run by private corporations that are often more interested in generating profits than in empowering parents. Parents usually have less input into charter schools than public schools. Moreover, most charters do not get better academic results, and many impose harsh disciplinary procedures and push out students who need extra help. Instead, Parents Across America supports true parent empowerment, with real solutions devised from the ground up rather than imposed from above.  We want to see the authentic involvement of parents, along with teachers and other stakeholders, in developing, school-specific, research-based strategies for improvement.

How can we fight back?  Last spring, Florida parent groups, including Parents Across America, banded together to fight Parent Trigger legislation that had been introduced in the state legislature. By holding rallies and press conferences, calling their elected representatives, and speaking out about how the Parent Trigger is a ruse devised by corporate reformers to benefit charter operators rather than children, Florida parents prevented the legislation from being passed.

Speak out for real parent empowerment and voice. Spread the word on “Won’t Back Down” and Parent Triggers. We need real change in our schools, not false solutions.

The California Parent Trigger law specifically exempts charter schools from the law. If a school is converted to a charter there is no way, short of financial failure, to reclaim the school. Buyer's remorse is not an option.

Gloria Romero, Ben Austin and uninformed legislators in California, with the help of then Gov. Schwartzeneggar, created a damaging and divisive law that does not provide any educational benefit for kids.

In a very disturbing move, the Democratic National Convention has accomodated Michelle Rhee's StudentsFirst and Parent Revolution's bid to screen "Won't Back Down" at the DNC on September 3, 2012.

I posted the details and the StudentsFirst links to Romney, as well as Democrats for Education Reform's role in this screening in my last blog post.

The above statement is untrue. Students1st DFER and Parent Revolution are hosting a screening of the movie as a side event during the Convention; it will NOT be screened at the Convention itself -- even thought the link claims this:

It will be screened at The RNC. In Tampa on the 28th. Weather permitting. And by invitation.

New York private schools are startling in every way; the crazy stampede to get into the top ones, the jaw-dropping fees when you succeed and the insanely ambitious and competitive parenting at virtually every corner. The scramble to get into a school is, like everything else in this city, amplified.
phlebotomy education in louisiana