UPDATE on our charter co-location lawsuit 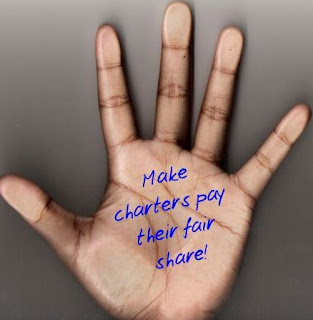 Yesterday morning in the State Supreme Court, Judge Barbara Jaffe heard arguments from attorneys working for the city and the charter schools who want to dismiss our lawsuit against the practice of DOE providing free space and services to charters, which we believe violates state law.
The attorney from the City's Corporation Counsel  said the administration's co-location policy goes back more than ten years and has never before been challenged, and that the judge should give deference to DOE and State Ed Commissioner on this matter, especially if it’s a close call.  Judge  Jaffe responded that she didn’t need to defer if she didn’t see ambiguity in the statute.  Then the charter school attorney got up and made a lot of other arguments, each of which were quite hard to swallow.
First, he said, Class Size Matters and NYC public school parents have no standing to bring a lawsuit, because we can’t prove any harm to schoolchildren due to the loss of $100 million (which is what we have estimated the lost revenue if the DOE charged for space and services, based on IBO figures.)  Since we can’t prove that the additional funding would mean more teachers or smaller class sizes, we shouldn’t be allowed to sue.  The judge responded that the court is supposed to interpret standing liberally.  Later, our attorney Arthur Schwartz pointed out the absurdity of this claim; including how many including the mayor have bewailed the negative impact on our schools from the $250 million in state aid lost because of the failure of the city to make a deal on teacher evaluation.  What is $100 million, he asked, chickenfeed?
The opposing attorney also argued that the provision of free space to charters was simply a matter of allocation of resources that should be purely up to the DOE.  The Judge seemed skeptical of this point as well.  Finally, he tried to make an argument that the provision in the state law that says charters “may” contract for services or use of buildings with the district, but that "any such contract shall provide such services or facilities at cost” implies that they don’t have to have a contract to get use of these services or buildings, and if they don’t have a contract, they don’t have to pay anything.  He maintained that the free space could be considered a “contribution” from DOE.  The Judge suggested that this might be seen as an end-run around the law.  Our attorney pointed out that the charter schools already get per student funding, and the free space provided by DOE means that co-located charters are getting an extra $2700 per student than the law specifies, and more funding per student than public schools receive. If the argument of the charter attorney was taken to its logical conclusion, it would mean that the DOE was free to provide any amount they wanted to the charter schools, to the detriment of our public schools, totally ignoring the formula set out in state law.
There was also back and forth as to whether there is any added “marginal” cost to the city by providing this extra funding to charter school students, since most of them would attend public schools anyway; the DOE says no (of course) and the IBO said yes.  Finally, their attorney argued that there are 101 charters in public school buildings enrolling 50,000 students, and if they had to pay rent they couldn’t continue to exist.  To that, the judge said “Gosh Darn, that would be a shame, but this is not the issue before me.”  [Not to mention that Eva Moskowitz’ charters had a surplus of over $23 million last year that could have paid for a lot of leases, though that might at some point cut down on the millions they spend on administrator salaries, advertising, PR and political lobbying.]
The judge was also interested in hearing more about the constitutional claim of our attorney, that there are fundamental inequities in how these co-locations have undermined the right of public school students to receive an adequate education.  The charter school attorney said that courts held in the CFE case that students are entitled not to equity but minimally adequate conditions, and the judge responded that some of the alleged facts in our brief, including public school students pushed into basement rooms next to the boiler with almost no toilets, might not been seen as even minimally adequate.

Anyway, we hope to hear in a few weeks whether the case will be dismissed or not.  Cross your fingers.  It has been dismally slow so far, given that we originally sued in July of 2011, but we hope that things will move more quickly if and when this moves to trial.

A repeat of some questions I posted on Gotham Schools:

1. How many charter schools are co-located? The most recent figure I've seen comes from the IBO, which estimated that there were about 75 co-located charters in 2009-2010. Do you have a source with a more recent estimate?

2. If we assume, for argument's sake, that you won this lawsuit and the court ordered that the DOE must collect rent in the amount of $100 million from co-located charter schools, and the DOE did in fact collect that rent -- how much of an impact would that have on class sizes for non-charter public school students? If we assumed an annual cost of $100,000 (wages and benefits, and not including pension contributions, which I think is pretty conservative) per teacher, that would be an extra 1,000 teachers. But if these schools are as overstuffed as the complaint alleges, I would think a lot of that money would have to go toward finding additional space instead of teachers. Have you worked through any of these scenarios?

3. If we assume, for argument's sake, that you won this lawsuit and as a result, every single co-located charter was forced to close -- what impact would that have on class sizes? There would be no rent check of $100 million, and according to your complaint there would be about 35,000 students that would have to be absorbed back into public school classrooms. There would be some savings in terms of administrator jobs, but eliminating 75 principal positions would only save around $10 million or $15 million (using a generous estimate of $200,000 in wages plus benefits per principal).

Thank you for fighting on behalf of NYC public school students. It makes me sick that our PTA is forced to throw fundraisers every other day to ensure adequate funding for our school.