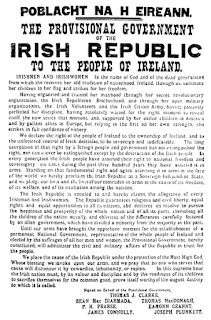 In the arts section of today's print edition, the NT Times ran a full copy of the Easter Proclamation, the document announcing the formation of an independent Irish Republic in 1916.  Along with its political importance, the Proclamation is recognized for its literary qualities.  Those qualities are due to its authorship by teacher, school principal and poet Patrick Pearse.   He had founded a school to teach the Irish in their own language.

Pearse read the Proclamation to a small crowd at the start of a rebellion to establish independence.  He was executed at the conclusion of the failed rebellion by a British firing squad.  The outrage that followed the executions of the leaders of the independence movement led to a war with Britain that eventually produced the Republic of Ireland.

Today, our political leaders tell us the role of teachers is to improve test scores and do things like help students interpret informational text in our new Common Core Curriculum.  Instead, on this St. Patrick's Day, I'd like to salute a teacher who helped the Irish people realize their destiny and by extension, salute all teachers who do the same with their students every day.
Posted by Patrick J. Sullivan at 3/17/2013 09:08:00 AM