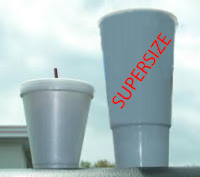 March 11, 2013 (GBN News): Mayor Michael Bloomberg has a plan to deal with those unused supersize drink containers that city eateries can no longer sell because of his ban on oversized drinks. He’s going to turn them into classrooms.

Ever the environmentalist, the Mayor told reporters today that the Sanitation Department will immediately begin collecting the containers and turning them over to the NYC School Construction Authority. The SCA will in turn recycle them into prefabricated classrooms, to replace many of the controversial trailers which are currently used to alleviate student overcrowding.

Schools Chancellor Dennis Walcott was enthusiastic about the plan. Standing by the Mayor’s side at City Hall, Mr. Walcott noted the innovative round design of the new classrooms, an artists’ rendition of which seemed, to some observers, ironically reminiscent of a Big Gulp.

“With these new classrooms and their more efficient use of space,” Mr. Walcott said, “we will go a long way towards meeting the Mayor’s goal of doubling class size.”

Added the Mayor, “That’s especially true given that with our children drinking less soda, they’ll be less obese and we’ll be able to fit more of them into each classroom.”