Bloomberg's education legacy in The Nation 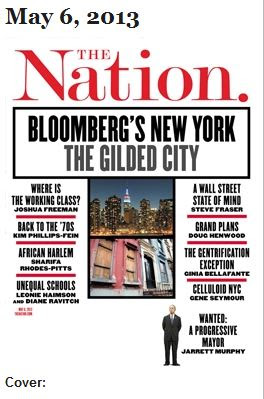 Diane Ravitch and I have an article in this week's The Nation about Michael Bloomberg's damaging legacy for our schools; and how his policies widened inequities rather than narrowed them. Here is the introduction:

In 2008, Mayor Michael Bloomberg and his schools chancellor at the time, Joel Klein, testified before Congress that their policies had led to a substantial narrowing of the racial achievement gap, meaning the gap in test scores between white students and those of color: “Over the past six years, we’ve done everything possible to narrow the achievement gap—and we have. In some cases, we’ve reduced it by half,” said Bloomberg. He repeated that claim in 2012, saying, “We have closed the gap between black and Latino kids and white and Asian kids,” he said. “We have cut it in half.”

The notion that there had been a great improvement in the public schools, leading to sharp increases in achievement among minority children—the majority of the city’s public school students—was echoed in the mainstream media. It helped Bloomberg retain mayoral control of the public schools, which the state legislature had granted him shortly after his election in 2002, and to win a third term in 2009 (a campaign in which he spent a record $108 million).

Unfortunately, his claims of closing the achievement gap proved misleading. For the rest, go check it out.