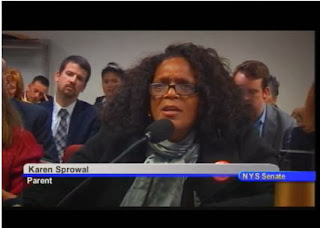 Wednesday's NY Senate hearings on the Common Core, testing and privacy were long but revealing.  After our press conference, the morning started off with Merryl Tisch, head of the Regents, saying that the tests had caused much upset and displacement but the state must move ahead with the program, no matter what.

Many of the Senators present were former teachers who decried the amount of standardized testing and test prep, the stressful effect on schoolchildren, and their total uselessness for the purposes of diagnostic assessment or teaching.  But Tisch said that it was important to carry on, given the low rates of college-readiness throughout the state (as though flawed, lengthy and stressful tests are necessary to prepare kids for college.)

Sen. Hoylman asked her why Commissioner King is holding 16 forums around the state, but none are scheduled so far in NYC, where one third of the entire state's public school students are enrolled.  She said they would be announcing some NYC forums soon -- either three or five, she was unclear.  She used as an excuse that the DOE had adopted their teacher evaluation system later than the rest of the state. (Why this is relevant?)  When asked about why the state's providing personal student information to inBloom, Tisch deferred to Ira Schwartz of SED, saying the issue was "too technical for me", although she has been supporting this unconscionable plan from the beginning.

Schwartz repeated the bland SED talking points that many districts already have contracts with vendors, and the state's sharing data with inBloom is not different from what they do currently.  Of course, superintendents and school boards throughout the state oppose inBloom and disagree vociferously.  He added that the new system will simply make it easier for personal student data to be used more efficiently, as though why should assuage the anyone's fears.  Senator Tkaczyk asked, what about parents with special needs children?  Schwartz: this is not a cause for concern.  Glad you've cleared that up, Ira!

Tisch claimed that many teachers think the Common Core curriculum modules provided by the state are helpful, though this seems to be contradicted by voluminous statements made by teachers at the forums around the state, where the poor quality of these scripted modules seem to be their  #1 complaint.  She said that she came from a family of immigrants, and she was sympathetic to the needs of English Language Learners.  She was "appalled" by the federal requirement that ELLs have to be tested with the same state exam after one year, and that NYSED would be asking for a waiver.  She decried the "inflammatory rhetoric" being used around the state, and then claimed that if we want New York state to remain civilization's "centric" we must proceed apace with the Common Core and the testing regime, or "families won't stay here." (Talk about overheated rhetoric.)

Senator Felder commented that he himself wasn't a good student when he was in school, and many other students who don't do well on tests excel in art, music or other areas. He wrapped up by saying that "Kids aren't robots" and that the state's emphasis on exams do little to help them. (much applause and no response from Tisch.)

Then came Michael Mulgrew of the UFT, who wholeheartedly supported the Common Core and its premise, that we need it because international comparisons show that our country is "falling behind other nations."  (A new study seems to dispute this.)  The roll out, though has been "terrible," because there's "no curriculum" (what about those modules that teachers are complaining about?)  Until there is a curriculum, we should have a moratorium on the high-stakes of tests, but not halt the tests themselves, and the tests should be made harder more gradually, as "there's a human cost to students and parents to suddenly impose a new baseline".  Senator Martins smartly pointed out that he wasn't sure about the validity of the cut scores, (along with many others) and "how does failing on exams help kids learn, anyway?  Mulgrew said he wasn't a psychometrician, and Martins should ask King about that.

Deputy Chancellor Suransky was up next, and made all sorts of debatable claims, like the new state tests were far better than the old ones (really?) and that the DOE just needed more "flexibility" from the Legislature in implementation, though he could give no specific examples.  He said that the DOE didn't want to have to give the much-criticized bubble tests to Kindergarteners in their Early Childhood Centers, but had been forced by SED because of their teacher evaluation system. His major thrust was that whatever problems existed with the Common Core would be solved by giving teachers more common planning time and professional development -- though this would likely cut into their time with students, and/or raise class sizes.  Already with DOE permission, schools have converted one day a week of their extra 37 minutes per day to  planning time, scoring tests or training, time that was originally designed to help struggling students with small group instruction; and many schools are also instituting half days to do more of the same.

While Suransky said much of the angst among teachers about the new evaluation system was misplaced, since only 1% of them across the state were rated ineffective, he neglected to mention that 6% of teachers in the tested grades and subjects were rated ineffective, putting the credibility of the entire system in doubt. While the next administration may want to make "adjustments," he didn't expect any major shifts since there is agreement between SED and the UFT that this important work.  (Parents don't seem to enter into the equation.)

Finally, he said that only 3% of students who fail 3rd grade exams pass their 8th grade exams, showing how early education is important, but to him and too many others, early childhood education seems to stop at preK.  With the highest class sizes in 14 years in grades K-3, the DOE has taken away one of the most effective ways to ensure children, especially poor children of color and English language learners, can have a decent chance to succeed.

Though neither Mulgrew nor Suransky mentioned class size, the next panel did and were passionate, articulate and pointed in their remarks. The panel of parents, Nancy Cauthen, Lisa Shaw and Karen Sprowal, were all terrific. Nancy focused on the Common Core, and how parent's concerns have been ignored.  She explained how she pulled her oldest son out of school to homeschool him because she was fed up with all the testing. Lisa and Karen focused on inBloom and spoke eloquently and convincingly about how the state's plan to share their children's most personal data with vendors and "profile" them could imperil their futures. Nancy's testimony starts at 2:36, Lisa and Karen at 2:52 in.  Be sure to check them out; they were the stars of the day (at least in my eyes.)

They both also spoke about how they would no longer sign Medicaid reimbursement forms because of the state's data-sharing plans -- which could cause the city to lose millions of dollars if other parents do the same.  After their testimony, Senator Martins, the prime sponsor of S. 5930, the bill to protect student privacy, thanked them because he knew that now he "will have five or six more co-sponsors on his bill."

Monte Neill of FairTest gave terrific testimony, about the rebellion against hi-stakes standardized testing that has erupted in NYC and across the country, and that no other nation gives so many exams; also Marco Battistella of Time Out from Testing.

Then a trio of "specialists" appeared, first the VP of a for-profit company selling an online credit recovery program (really?), and two reps from StudentsFirst NY, Michelle Rhee's organization, selling the line that despite all the evidence, most teachers and parents really support all the testing and the Common Core. One of them actually claimed that in the past year, the organization had had face-to-face conversations with over 300,000 New Yorkers!  (Another ridiculous claim, like Rhee's statement that StudentsFirst has a million members -- mostly made up of people who signed their deceptive petitions by mistake.) Both StudentsFirst reps also claimed that the Common Core would somehow provide educational equity to all students.  Nuff said.  Ernie Logan, head of the NYC principals union spoke at 3:58 min in, explaining how missteps and miscommunications had angered parents and others.

Many others spoke with great passion and insight, including Fred Smith from Change the Stakes, Rosalie Friend, and Dr. Ruth Silverberg.  Watch them all -- and especially the shocking testimony of John Owens, former teacher, about the systemic data manipulation and corruption behinds the scenes at one of the "model" new small schools, at 5:16 in.  All the written testimonies are available here.  The Senators seemed to be listening.  Let's hope they take it to heart.

As a teacher, this disturbs me and many of my colleagues the most...

"While the next administration may want to make "adjustments," he didn't expect any major shifts since there is agreement between SED and the UFT that this is important work."

That is an agreement with UFT leadership only, not with the thousands of teachers against these horrible Common Core/Evaluation changes.

These new policies are harmful to children, parents, and teachers alike.

When asked about why the state's providing personal student information to inBloom, Tisch deferred to Ira Schwartz of SED, saying the issue ... wohnzimmertischschwarz.blogspot.de