Videos of Interviews of candidates for the Board of Regents 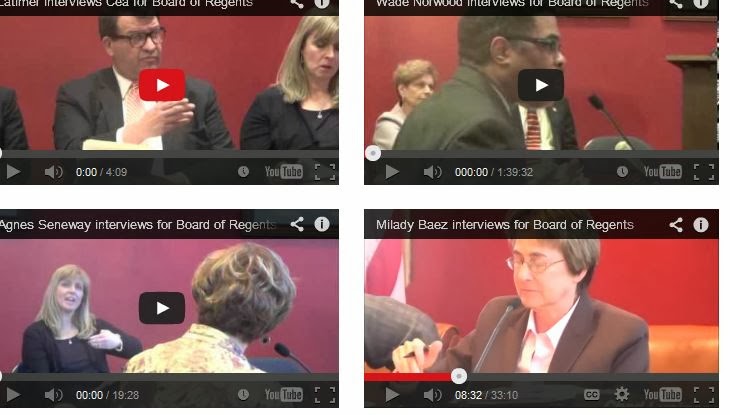 Next month, four members of the board of Regents will finish their five year terms and are applying
to be re-appointed.  The Board of Regents appoint the Chancellor and are in charge of setting education policy for the state.  All four current members who are applying to be re-appointed, Christine Cea, Wayne Norwood, James Jackson and James Cottrell, have strongly supported Commissioner King and his controversial implementation of the Common Core standards and curriculum, high stakes testing, and data-sharing with inBloom.

NY State Allies for Public Education is endorsing an alternative slate of candidates, whose positions more closely reflect the widespread discontent among parents and educators with these policies.

Below are some videos that contrast the interviews of two of the new candidates applying for these seats with those currently holding those seats. These interviews are conducted primarily by the chair of the Education committee, Assemblymember Cathy Nolan and the chair of the Higher Education committee, Assemblymember Deborah Glick, but other legislators also ask questions.  More videos are collected here.  The vote of the Legislature on these appointments is expected to take place on March 11.  Parents should contact their legislators to let them know how they would like them to vote.

First, see the interview of Michael Reilly, a NYC parent leader and Community Education Council  member, who is applying for the Staten Island seat.  If selected, Mike would be the only Regents currently with a child in the public schools.


Contrast Reilly's positions with those of Christine Cea, a researcher at the New York State Institute for Basic Research in Developmental Disabilities who holds the Staten Island seat and is applying to be re-appointed.  She appears to have a very different point of view on the Common Core and testing, especially as regards students with disabilities.  Here is a quote from her interview, when asked if there is a disparity between the Common Core and the IEPs, or individualized education programs mandated for students with special needs:


Also please watch the interview of Milady Baez, a former teacher and Queens local superintendent, who is applying for one of the at-large seats.  She expresses a more critical perspective on the Common Core as well as the education agenda pursued previously by the non-educators in the Bloomberg administration.


Baez's positions on equity and education contrast with those of Wayne Norwood, who currently sits in one of the at-large seats, chaired the Regents task force on the Common Core, and is a strong proponent of the current NY State Education policies.  Norwood is the Director of Community Engagement for the Finger Lakes Health Systems Agency, and like Cea, is applying for another five-year term.